The 3 Big (Red) Reasons the Chiefs Won the Super Bowl 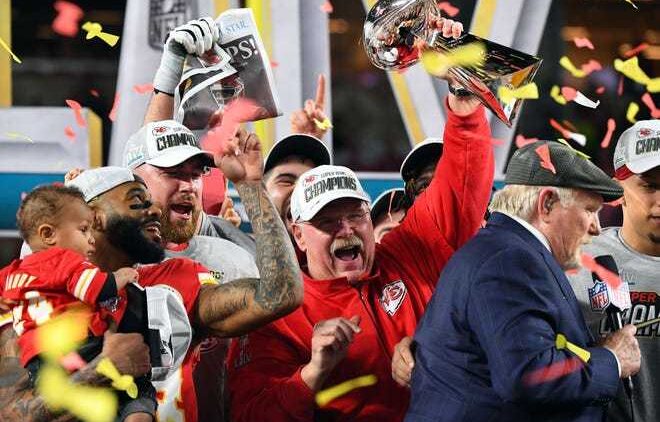 The Kansas City Chiefs won their first Super Bowl in 50 years thanks to a 4th quarter surge in which they scored 21 unanswered points and turned a 20-10 deficit into a 31-20 win. Mahomes became one of only three quarterbacks to have won a Super Bowl at age 24 or younger, Andy Reid finally got his ring, and there’s a new team atop the AFC for the first time in decades. Let’s take a look at three of the most critical things that lead to the Chiefs’ win: Kansas City’s use of speed option, Richard Sherman’s bad day, and the 4th quarter pressure on Jimmy Garoppolo.

1. The Chiefs use of Speed Option

The Chiefs use of the speed option early in the game lead to some huge conversions and came-changing plays. A super basic concept run even at the high school and pop warner level, the speed option puts one unblocked defender in conflict by stretching horizontally with the QB and the running back. If the defender comes down on the QB, he pitches it outside to the running back. If they defender flies to the running back, the QB keeps it and runs underneath. The Chiefs ran this play five separate times including on the first play of the game, on the one yard line for their first touchdown, and on a 4th and 1 call.

Ideally on speed option, you have one defender designated to attack the QB and one defender designated to cover the pitch option. Because of the counter step and fake inside zone look that running back Damian Williams and quarterback Mahomes show, both linebackers — typically the defenders designated to cover the pitch — take a false step inside. Now with the linebackers out of position, when the unblocked end who is meant to take the QB crashes inside, there is nobody to immediately rally to the pitch as linemen have already begun to climb to the second level to block the linebackers. The result is a 7 yard gain for their first offensive play of the game.

In their second speed option, it turns into a pretty simple numbers game. The Chiefs shift into a balanced look with an equal amount of players on either side of the center. The issue is that San Francisco has five to one side and four to the other. It’s an easy call to run the ball to the numbers and attack the four defenders with your four blockers. Throw in an unblocked man to read, a counter motion from the running back and QB again and it’s easy sailing into the endzone. The pre-snap shift from the fullback makes #54 come down onto the line of scrimmage which makes the blocking angle much easier for the Chiefs. He’s now inline and easier to block and wash out of the play. If he had stayed at depth, it would have been a much harder block and he could have scraped to prevent the pitch option or have taken the QB. As it was, though, Mahomes reverse pivots out to fake a run to the left before turning around and running the speed option to the right. The linebackers flow to the left and are now out of position just like before and it leaves one defender to defend against both Mahomes and Damian Williams at running back. #29 Tartt is put in an impossible position, the linebackers are a step slow, and it’s a Kansas City touchdown.

Their third speed option of the game came on 4th and 1 at the 49ers 19 yard line with a little over 11 minutes left in the 2nd quarter. The same principles stand except this time there’s no misdirection. The 49ers are in man and the linebacker #54 Fred Warner is lined up over the top of the running back away from the eventual direction of the play. The Chiefs leave the defensive end, #97 Nick Bosa unblocked as the read man who crashes on the QB. Mahomes pitches the ball and it’s an easy first down with the linemen able to climb and wall off the pursuing linebacker. The Chiefs again won on formation and exploiting the way the 49ers chose to line up.

In two gotta-have-it situations the Chiefs went to the speed option and executed them perfectly, changing the shape of the game. While the Chiefs dialed up the speed option in crucial situations, they also ended up targeting a surprising player in the secondary when they needed a big play. What was supposed to be the strength of the defensive backs, Richard Sherman, got routinely worked by almost every receiver the Chiefs put out on him. Sherman was targetted six times and allowed six receptions for 77 yards and a touchdown. Sherman may be an elite cover 3 corner, but he lacks short area quickness and the ability to break with suddenness. He can get caught peaking and is excellent at reading route combinations and tendencies, but was taken advantage of throughout the game even when Mahomes didn’t end up throwing at him. You can see here on the first catch against him how slow he looks coming out of his break and his inability to break down when he attempts a tackle.

Below, one of the few times they moved Sherman around on the field in man, he attempts to jam Mecole Hardman, whiffs, stops his feet entirely, and falls down.

Since Sherman knows he doesn’t have the speed of the Chiefs receivers, he would often quickly bail and leave tons of space underneath him for them to snap off on deep curls or comebacks like below.

Sherman also has trouble with inside releases when he’s up in press man. Even without the attempt the jam, he leaves his feet and jumps to the first move of the receiver. Watkins ran the same exact route technique that Davante Adams did in the NFC Championship game and got the same exact result in a crucial time in the game with 4:13 left in the 4th quarter. Watkins stems Sherman to the outside and as soon as he turns his hips, plants to release back inside. Sherman doesn’t have the quickness to recover and is beat for 37 yards.

While the majority of the attention was on the offense for the Chiefs, the defense also stepped up too. They didn’t get much pressure on Jimmy Garoppolo until the 4th quarter, but once they started to break through, they broke through in a big way. With just a 46.9% completion percentage on the year when under pressure, it’s not surprising that Garoppolo started to struggle once Kansas City began to get home in the 4th quarter. He was pressured on 7 out of 12 attempts in the 4th quarter and completed none of those pressured passes, allowing the Chiefs to steal extra possessions and have an opportunity to complete the comeback. You can see below how the pressure in Jimmy’s face doesn’t allow him to follow through and the ball ends up sailing.

Another well-timed green dog blitz where the linebacker blitzes once the running back stays in for pass protection forces Garoppolo to get the ball out early and there’s either miscommunication with the receiver, or Jimmy is just trying to get rid of the ball because he’s nowhere close.

Throw in a couple batted balls by Chris Jones and it’s not surprising the 49ers offense ground to a halt in the 4th quarter. On their final four drives the 49ers gained 49 yards, zero points, and only three first downs. The calls were fine. Players were schemed open, but the Chiefs defense executed at a higher level than the 49ers offense. If someone was loose in coverage, Chris Jones batted the ball down. If a receiver was open, Jimmy missed them. If the first player missed the tackle, a second was right behind him. When it mattered most, the Chiefs played sound, mistake-free football and it won them a Super Bowl. With the scheme and attack of Andy Reid and the offense, the defense playing disciplined and rallying to the ball, and the end-game magic of Mahomes, the Chiefs were able to add one to the trophy case. Congratulations to Kansas City and my condolences to the 49ers. I have a feeling both will be competing for the trophy for years to come.