Kyler Murray’s Rookie Season and What his Future Holds 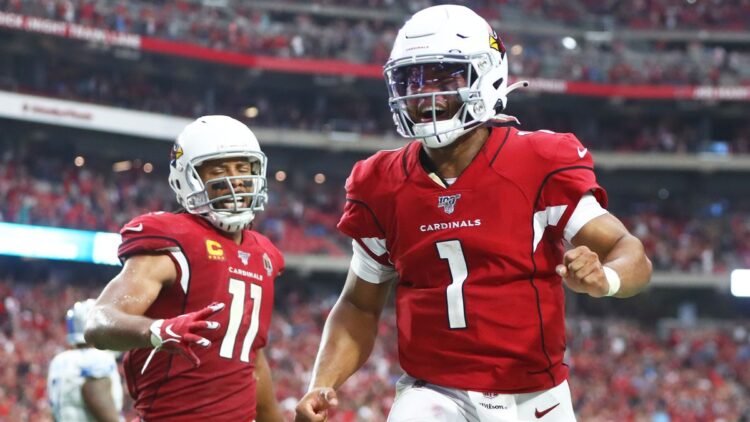 A year after taking Josh Rosen in 2018 with the 10th overall pick, the Cardinals went and grabbed Kyler Murray with the 1st pick in the 2019 NFL Draft. Let’s take a look at the film and see how Murray did during his rookie season while leading the Cardinals to a 5-10-1 record under first-year head coach Kliff Kingsbury.

A few other things jump out when looking at his stats that also end up being backed up by the film. When the Cardinals went no huddle, he completed 70.26% of his passes (61.1% while huddling), had a 96.0 QB rating (82.6 while huddling), had 8.0 yards per pass attempt (6.2 while huddling), and while running the no huddle 35.9% of the time, it accounted for 41.7% of his yards. A similar trend can be found when he is in shotgun versus under center. His completion percentage is 66.6% versus 41.67%, rating is 89.5 versus 66.4, and yards per attempt is 7.0 versus 5.9. When running RPO concepts he also had consistently better numbers than he did on pure drop backs.

None of this is super surprising given the offense he ran at Oklahoma that had him in shotgun, running RPOs, and pushing the tempo. Of concern though, is his ability to be decisive, process NFL reads, and limit the sack numbers when he isn’t running a no huddle offense. A consequence of going no huddle is that the plays become simpler – which can be great for a rookie quarterback used to making basic defender key reads, but can also be easier for defenses to guard against since the play selection, formations, and tendencies are much more specific and easy to identify.

While Murray has definitely shown flashes, he has a bit of a climb to ascend into a top tier quarterback. The Cardinals offensive line struggled but Murray also routinely had trouble with blitzes and would frequently hold onto the ball too long waiting to see something open instead of throwing with anticipation. When he would throw on rhythm, however, he looked like an entirely different quarterback. Let’s dive in and see some of the potential that Kyler Murray has before checking out some of his mechanical issues and his problems holding onto the ball and being indecisive.

The Cardinals ran a lot of empty sets which puts a strain on their offensive line, and forces Kyler Murray to make quick, decisive reads. Here they have a simple slant flat concept where he read the flat defender and throws based off of his movement. The Browns appear to be in cover 4 here with each defensive back taking a quarter of the field deep. That leaves the outside linebackers to cover the flats. Kyler keys the outside linebacker to the top of the screen. As the linebacker goes to the flat route, that opens up a window behind him for the slant and Murray makes a decisive throw for a nice gain.

Here’s another simple read out of an empty formation. To the three receiver side, they have a hook, flat, fade combination going on. It’s the same basic concept as the slant flat where you can key the flat defender and throw off of him. Here, #20 sits and doesn’t come down to the hook and Murray throws on rhythm for an easy completion. Backside, they’re setting up a delayed screen if Murray doesn’t like the look to the bottom of the screen.

Here is Kyler Murray recognizing man coverage to the bottom of the screen, quickly holding the safety with his eyes, and then throwing a great ball without hesitation to #14 who wins his route.

When Kyler Murray only has to read one or two things, he can throw with anticipation and accuracy. He gets in trouble when he has to process a lot of things at once which can lead to his sacks and interception issues. Here he is getting off of his first read and throwing on time, with power, and with anticipation for a nice gain on a comeback to the sideline.

These simple reads translate really well to RPO concepts where Murray can make quick decisions based on one or two key defenders and make decisive throws. It fits his current skillset perfectly, protects the offensive line, opens up lanes in the run game for the zone read, and gets the ball in playmakers’ hands. Here the Cardinals run a simple orbit motion behind the QB into a bubble route. Murray is looking at the inside linebacker and playside safety. As soon as he sees that they don’t bump over, it makes it an easy decision to throw the bubble as the Cardinals have the Steelers outnumbered on that side of the field. The throw is low and minimizes the opportunity to get yards after the catch, but we’ll talk about his mechanics issues shortly.

Here’s another RPO that is the same concept just with two receivers. Larry Fitzgerald runs the bubble and the outside receiver blocks the man lined up over top of him. Murray is keying the outside linebacker highlighted in the gif. As he stays and feeds towards the run, Murray pulls the ball and delivers it to Fitzgerald for an easy nine yard gain.

Now that the good stuff is out of the way, let’s check out some of his mechanical issues, penchant for taking sacks, and his problems processing NFL defenses. He will often over rotate his hips, have a base that is too wide or tight, dip his shoulders, or fall away from his throws. This causes a lot of horizontal inaccuracy with the hip rotation and a lot of vertical inaccuracy with his lack of follow through and his shoulder dip.

On this play you can see Kyler Murray falling away and over rotating on his throw which causes the ball to sail to the right out of bounds when his receiver had half a step downfield on the DB. Ideally this ball is put out in front or with some arc to allow the receiver to run underneath the throw or win the jump ball. You can see as Murray is finishing his throw that he is already leaning and falling backwards. Yes there is a defender coming up on him, but he has space to make the throw and this is a recurring issue for him.

Here’s another case where Murray finishes his throw off balance which causes the ball to be flat and lose power before it gets to the receiver, eliminating any chance for a catch and run. The ball goes where your body tells it to go and here Murray’s body is telling it to go flat and low as he’s falling away.

Here, the opposite issue comes up as he lacks follow through and full hip rotation. He over-extends on his base (his front foot is too far forwards) and this causes him to be unable to generate power and accuracy because he cannot get his hips around. Ideally your belly button is pointing where you want the ball to end up and here Kyler Murray ends up short of his aiming point and just like the last clip, the ball goes where his body tells it to – behind the receiver and into the arms of the defense. You can try this yourself. Get in a wide stance and try to bring your hips and belly button to point to the other side of your front knee. Now shorten your stance to a little bit wide than your shoulders and try to do the same. You should have a much wider angle of hip rotation available to you which helps steer the ball and generate power.

Another big issue with Murray’s game is bailing from clean pockets with receivers open and time to make the throw. Then, when he escapes the pocket, he also tends to bring his eyes down and focus on check downs right in front or search for a running lane. Here he has Kirk #13 breaking open on a deep out but bails from the pocket instead of standing in and delivering the throw. As he rolls out, he has Kirk still working open and coming back to him towards the sideline but Murray is locked in on receivers underneath and signaling at Kenyon Drake in the flats. If scrambling and getting outside of the pocket on broken plays is going to be Murray’s thing, he has to do a better job of lifting his eyes up and seeing the whole field.

Remember the quick hitch from earlier that Murray threw on time? Here’s the exact same play with the exact same read and Murray misses it this time.  He looks to Fitzgerald first but you can see that he looks directly at the hook and doesn’t throw it afterwards. This is a common issue for him. If his first read isn’t there, his instinct is to get out of the pocket and scramble or hold onto the ball for far too long. This is a huge contributor to his sack numbers.

You can see here Murray’s instinct to run first. As soon as he feels pressure or sees a hole to scramble through, he takes it – often leaving big plays on the field in the passing game as longer developing routes are just opening up as he takes off. You can see highlighted at the bottom of the screen the dig route coming open towards the middle of the field.

Here is one last example of Murray’s shallow eyes leaving a big play on the field. Here he escapes the pocket after his first read and hits a hitch for a short gain, which is fine, but there’s also a receiver wide open within his field of view in the end zone.

Defenses haven’t been throwing anything wildly exotic at him as far as pass coverage goes. He does have trouble with the blitz but the biggest issues right now are his indecision on pure drop backs, full field reads, and his inconsistent mechanics. Not something you’d want from a first overall pick at quarterback. When you combine all of those things, you get a guy who was sacked 48 times, misses open receivers on scoring plays when they’re open, and leaves a lot of yards and points on the board. Kingsbury’s offense certainly didn’t help his cause either. While there were some concepts that made it easy for Murray, a lot of it struck me as uninventive and it really struggled to scheme guys open to give Kyler some easy throws on a consistent basis. A ton of stuff was short and emphasized their receivers winning on isolated routes versus the defender in front of them, and when Kyler didn’t throw on time, it essentially wasted the play. All that being said, the raw talent is there. Murray has the arm to make all the throws, can be dynamic in the run game, and when he has a simplified, fast offense that helps him accelerate his decisions, he can be an exceptional quarterback.