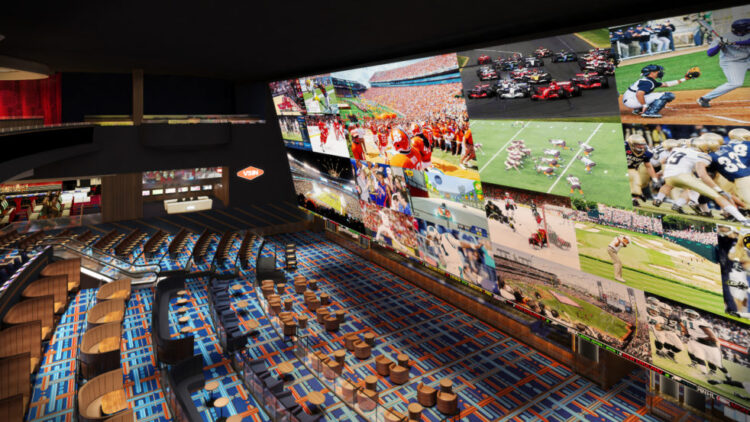 If you love sports and have thought about sports betting before but don’t feel educated or informed enough to know what you’re doing – look no further. We’ll cover all the basics you need to know to be able to confidently place a sports bet, read lines, and understand the bet you’re making.

The Spread. One of the most mentioned lines in sports betting. You might have heard about picks against the Spread, what team Vegas is favoring, or see the + or – signs next to teams but don’t know what it means. The Spread is actually pretty simple.

The most basic definition of the Spread is that it is the expected margin of victory or defeat. Essentially, it reads as a handicap. The team that is favored “gives” points to the opponent (-) and the underdog receives points (+). It’s an indicator of how much the sportsbook thinks that a team will win by. You’re betting on which team you think will achieve that estimation.

If you have a team that is favored to win by 5 points, that would read as Team A (-5). That means if you were to bet the Spread on Team A, they would have to win by more than 5 points for you to win your bet. If they won by exactly 5, that would be a push and you’d get your money back. Alternately, if Team A loses or wins by LESS than 5 points, you LOSE your bet. If you think that Team A won’t win by over 5 points, then you would bet on Team B (+5). That means you are betting that Team B will either win outright or lose by less than 5 points. Think of it as subtracting 5 points from the favorite or adding 5 points to the underdog because they need the help to make it an even match.

Let’s use an example between the 49ers and the Raiders:

However, if the Spread was instead -4, that would leave them tied at the end which would result in a push. Sportsbooks don’t like to push and give your money back which is why sports betting sites often use half points to avoid pushes. If the 49ers were instead set at -4.5, they would have now lost 16.5 to 17 to the Raiders and would not have covered the Spread.

For reference, one of the biggest points Spreads in the last 20 years for the NFL was in 2013 when the Broncos (-26.5) played the Jaguars (+26.5). That means if you bet the Broncos, they would have had to win by 27 points. Which, by the way, they didn’t. They won 35-19. If you had bet the Broncos (which you shouldn’t have, that’s an insane Spread) on that game, you would have lost.

Next, we have our Moneyline. In this bet all you’re doing is betting on who will win. Straight up, flat out, who will win. All the numbers are saying here is how much money you will get if you’re right.

The Moneyline tells you the amount you must wager on a team to win in order to win $100. This can often be confusing for people to read and understand because of that negative number. Just always remember that a negative number means that’s the favored team.

Almost all sportsbooks online automatically calculate that how much you stand to win based on your bet for you when you enter your bid, but just so we understand where that number comes from, let’s look at the math.

What the line is saying for the favorite (remember, the negative number) is that you have to bet $200 here to win $100. So if you think the 49ers are going to win this game, and you need $100 for that overpriced NFL Shop jersey of your favorite player that hit the touchdown to cover the Spread in your previous bet, you need to wager $200.

When betting on a favorite the formula is:

When betting on an underdog, the formula is:

That’s all there is to it. You’re picking the winner and the numbers just tell you how much you stand to earn. Obviously bookmakers want to make money too so they dissuade you from betting favorites by making the potential profit smaller. You’re risking more for the potential to earn less because that team is expected to win based on their odds and analysis.

One of the biggest Moneylines upsets in recent history in the NFL was in 2018 with the Bills (+2000) beat the Vikings. The Bills pulled it out in dominating fashion that day and if you had bet even just $10 on the Bills at that Moneyline, you would have won $200.

The Total or Over/Under

Our final type of bet. The Over/Under is probably the most intuitive to understand. You’re betting on whether the TOTAL number of points will go over the listed number or under the listed number. Where the over and under are listed only matters in that the over is usually listed with the favorite and the under is listed with the underdog. The over is designated by an “o” and the under by a “u”.

Odds and Ends of Sports Betting

Here are some other things that you should be aware of and know before placing your bets. It’ll just make you a little more literate in the betting world and make sure you understand what you’re seeing.

The vig is basically just a tax by the bookmaker to ensure they make money regardless of the outcome. It’s the cut they take for taking your bet and facilitating the transaction. If you see a number in parenthesis next to the Spread or Total, that’s the vig.

Rotation numbers are quickly going out of style but you see them more in person when you’re betting at a counter. They’re just numbers next to every possible bet you can make at a sportsbook or on a sports betting website as a way of keeping track of that bet so there’s no confusion.

Profit does not equal payout so don’t get confused on sports betting sites and think that you’re way up. Payout refers to the total money you’re getting back so that INCLUDES the bet you laid down. It is the sum of both your bet and the amount you won. If you bet $100 on the Raiders to win at -200 you would have won $200. But your payout would be $300. Your profit is $200. It makes it sound like a larger sum but you still are making only $200.

Lastly, we have Units. Units are a measurement of the size of your bet. Everyone is betting different amounts and is willing to risk different amounts of money so how do you communicate how well you’re doing despite these differences in scale? The answer is Units.

Meanwhile, Person B betting $10 has a total bankroll of $1,000. $180 is 18% of his bankroll, or 18 units. Person B is betting 10x better than Person A. Units are just a way to compare how you’re doing overall and in relation to other people. Now if you’re taking expert betting advice from someone and they say they’re up 20 units on the year, you have some context for what that means.

Currently, 19 states and DC have legal and operating sports betting. Six more states are in the process of legalizing it with betting being operational very soon. Each state has its own rules in terms of how to gamble. Some have a mobile option via apps (DraftKings, FanDuel, Barstool Sportsbook, BetRivers), while in other states you have to bet in person at a casino’s sportbook. Legalizing and approving betting can be a relatively complex process, but it seems that within the next five to ten years every state will have legalized sports betting in some capacity.

Just because betting isn’t fully legalized in your state, doesn’t mean there aren’t ways to get in on the action. Sports betting sites like Bovada, MyBookie, CashBet, and BetUSA are using offshore banks which allows them to be able to operate in the US.

However, the reputation of these sports betting sites is sketchy at best. Since they are offshore and don’t have to abide by United State laws, they can make their own rules. There have been accusations of them shutting down accounts with no warning or users not being able to withdraw money. Also, with these offshore sites, you have to be aware of the “bonuses” they offer. These bonuses look appealing, but hurt users because they don’t read the fine print. Complications can arise from accepting a bonus that will prevent you from withdrawing your money. We strongly recommend you don’t accept any bonus. If you do, read what the bonus entails and ask them questions if needed.

There you have it. That’s the basics of sports betting. Go make money and check back in with us to see some of our bets. We’ll keep you updated on our line of thinking on why we’re betting what we’re betting as well as some more tips and betting guides so that you’re fully versed in the language of gambling.