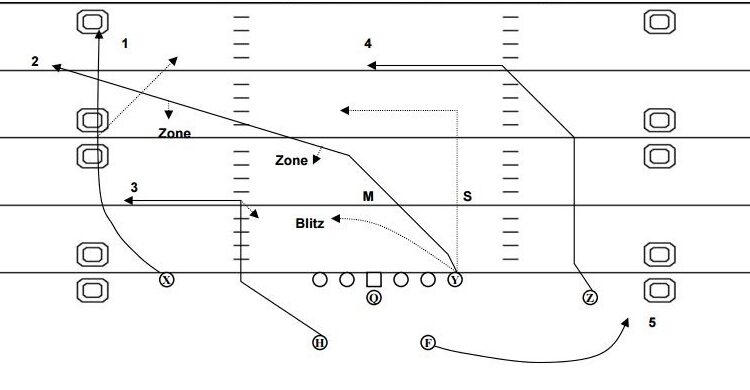 The Chiefs love using the Y-Cross concept in their passing game. They have elite speed and Andy Reid is great at utilizing that speed to attack defenses. One of his favorite plays – and one you probably heard Tony Romo talk about on Sunday against the Browns – is the Y-Cross. “Y” typically designates the tight end, but the Chiefs have multiple guys work as the cross in Y-Cross. Y-Cross forces defenders to transfer zones or run with the fast and talented receivers for Kansas City. Part of the reason that Y-Cross is so successful for the Chiefs is that it is able to attack all coverages.

There are two types of “cross” routes that can be run in Y-Cross. A high cross and a low cross. The high cross is deeper and ends at 18-22 yards downfield. The low cross is more shallow at 12-14 yards. Either way, that cross is the centerpiece of the play. Against one-high safety looks, receivers expect to get the ball between the numbers and the hash. Against two high and zone looks, the receiver will often settle in the first soft spot of the zone after the first linebacker.

The Chiefs run their first Y-Cross concept of the game out of an empty formation. Tyreek Hill is running the cross against a Cover 1 look by the Browns. That means the Browns are going to have to chase Hill across the field on this route which is exactly what the Chiefs want. This lets him use his speed to get to open grass. The Y-Cross concept always has a deep route or curl that is opposite the cross to pull the deep safeties or defenders on that side of the field and open up space for the cross. That’s what you see here from the Chiefs with the receiver to the bottom of the screen running a fade and the slot receiver running a quick out.

The play works exactly as designed with Tyreek Hill catching the ball between the hashes and the numbers about 18 yards downfield.

When faced with two-high safeties from the Browns, the Chiefs again run Y-Cross with Tyreek Hill running the cross. The two receivers to the top of the screen are running a Dagger concept with a post and deep dig. That deep post helps pull both safeties even though the safety to the bottom of the screen is working in a robber role to influence exactly this cross from the Chiefs. If he stayed down, he would have been there to jump and impact that route. Since Kansas City ran the deep post behind him, though, he has to get depth underneath it. If he doesn’t, the safety to the top of the screen is left out to dry.

As soon as Hill sees that robber, he knows to throttle down and find a soft spot in the zone. If he had continued, he would have ran right into where that safety was sitting. Hill settles down, the curl by Kelce holds the corner and linebacker, and there’s a window for Mahomes fit the ball in.

Now, the Chiefs run the same concept but with a low cross from Travis Kelce. You again have a deep route and someone in the flats at the top of the screen to hold defenders and Kelce does a great job of getting under the first linebacker and over the second before catching the ball between the hashes and the numbers 12-14 yards downfield.

The Chiefs find ways to get their guys in space and use their speed. The Y-Cross concept is a perfect marriage with Reid’s desire to push the ball downfield, the speed of the Kansas City receivers, and Mahomes’ accuracy on intermediate and deep throws.