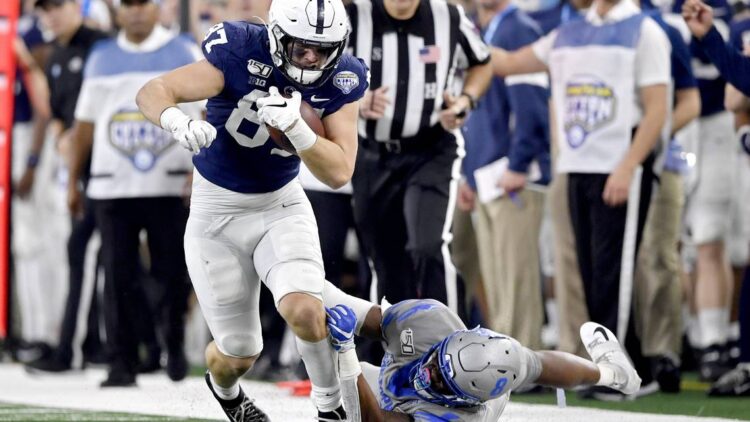 The Pat Freiermuth scouting report was a fun one. While many expected Freiermuth to opt-out of the 2020 season like his teammate Micah Parsons, the behemoth of a tight end decided to stick around and play for the Nittany Lions one last season. The man they call “Baby Gronk” never had consistent quarterback play, but found a way to make an impact in every game. While he might look like a dominant blocker, he’s much more effective as a receiver and has the chance to be a productive in the pass game at the next level.

For a tight end that’s utilized as a move (or F) tight end, Freiermuth is a difficult guard for any defender. He’ll utilize his 6-5, 260-pound frame to outmuscle defenders on any route. The most effective route he runs is a slant or a hook route in which he boxes out the defender like a basketball player. It’s also not just defensive backs he’s man-handling as Freiermuth has his way with linebackers as well. Most tight ends who are used more so as receivers aren’t typically as physical as Freiermuth, which makes him a mismatch nightmare for defenses.

Despite not having the stats to back it up, Freiermuth is an exceptional receiver. He finds ways to get open and has soft hands to catch just about everything. While he doesn’t have great speed, he’s a tough guy to tackle because of how hard he runs with the ball in his hands. I can see his role on a team being a third-down and red-zone target.

Improvement as a blocker

Let me be clear that I don’t think Freiermuth is as good blocker a as he should be for his size. However, the improvement he showed from 2019 to 2020 does give me a lot of hope that he will one day excel as a blocker. A huge part of blocking is desire and technique and once Freiermuth starts showing those things, he has the strength needed to be an asset in the run game.

For an “F” tight end, Freiermuth is an average athlete at best. An “F” tight end means you don’t normally line up as an in-line tight end on the ball. Rather, you line up in the slot, in the backfield, or off the line of scrimmage and thus are used more as a receiver rather than as a blocker. Typically, these players are quicker and leaner than an average tight end. However, Freiermuth is built like a tank and moves like one too. I think to have longevity in his career, he needs to work on his quickness or become a better blocker because he can’t win many routes with his athleticism.

Jack of all trades, master of none

Most top prospects are usually excellent in one area and then will flash promise in other aspects of their game. Freiermuth on the other hand is the opposite. He’s above-average to good in most aspects of his game but doesn’t stand out at one thing. This makes him a safe prospect, but teams may knock him for that. You can find a quality tight end in the second or third round, so that might push Freiermuth down the board if teams don’t think he has star potential.

I envision Freiermuth becoming a starter for a long time but never playing at an All-Pro level. A good comparison for him is Kyle Rudolph, a tight end who is known as a receiver, but got better as a blocker as he got older. I would gladly take Freiermuth in the second round and think he can be an impact player from day one. Teams like the Jaguars, Cardinals, and the Bengals all need a big target for their young quarterbacks and should all be in the market to draft a tight end at some point. He’ll never be your top receiving option, but he’s going to become a very good third or fourth option who has nice upside in the red zone.