Film breakdown on Joe Burrow’s rookie year with the Bengals 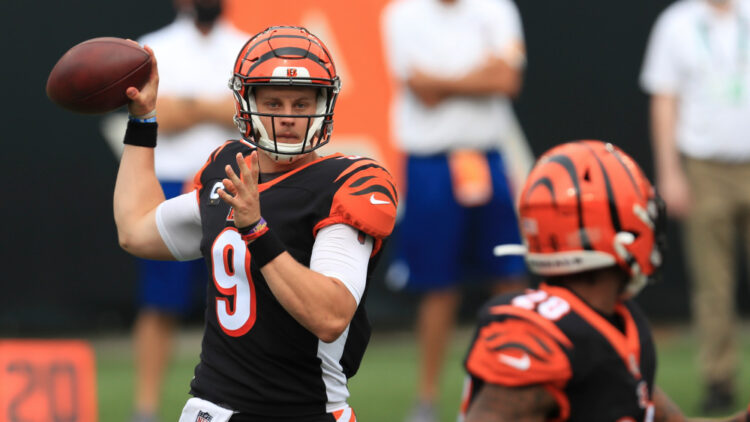 While Joe Burrow’s rookie year ended after ten games, he showed promise for the Bengals behind center. Despite an awful offensive line and play calls that didn’t put him in a great position, Burrow was able to move the offense, make a number of anticipation throws, and showed glimpses of the talent that got him drafted #1 overall. While there was good, there was also some bad. Burrow had some real ball placement issues along with pre-determining throws and locking onto his first read.

Read More: How Stefanski is Using Zone and Counter to Power the Cleveland Browns Run Game

You can get a glimpse right away at how bad this offensive line was for Cincinnati. Joe Burrow took 32 sacks and 42 hits over his 10 starts for the Bengals this year. Lucky for the Bengals though, Burrow showed good anticipation on throws downfield. He was able to navigate collapsing pockets and get the ball out before receivers had broken on their routes. That anticipation was necessary, because the Bengals flat out did not have time to let longer developing plays happen.

As soon as Burrow gets to the top of his drop, he’s under pressure. After sliding away to escape that pressure, Burrow delivers a ball that’s low and away on a comeback down the sideline. What’s more he has released the ball before the receiver has even gotten out of their break.

Since Burrow had to rely on these kinds of throws, he loved to read the single receiver side. That simplified his reads and let him throw off the leverage of the defender. It allows him to decide and begin the throw much earlier in his drop and protects him from getting hit. As soon as AJ Green wins outside leverage on the 10-yard out here, Burrow knows he’s going to throw the route. The ball is out of Burrows hands when Green is only eight yards downfield and still has his back turned.

Burrow also did a good job at keying single defenders to understand whether they’d be in the passing lane. Here, he’s confirming that the linebacker isn’t going to get out and underneath the quick hitch from Green outside. Based on the pre-snap look with the corner walked up in press, that likely means it’s Cover 2 Man. The only defender that will be able to get under that throw is the linebacker. Burrow looks at the linebacker to confirm that he’s carrying the seam up-field, and then again shows anticipation and begins his throwing motion before Green is out of his break.

It really is amazing how quickly the offensive line gets beat on some of these plays. As a result, when Burrow can key off one player and throw off them, that’s almost his only option. If he holds the ball to confirm, he’s taking a sack. All he’s doing here off the play-action is checking that Myles Jack at linebacker isn’t getting enough depth to cover the crosser by Tee Higgins. Myles Jack comes up, and Burrow throws a laser over the middle behind him.

To help Joe Burrow get the ball out of his hands, the Bengals ran a ton of quick passing game. Here, the Bengals have two slants on the outside and a flat route underneath. If the flat defender flies with the quick out, that leaves a window inside to the slant. If the next linebacker gets under the first slant, there’s a window to the slant outside to the #1.

Again, here, all Burrow needs to identify is whether the flat defender flowing to the outside. As soon as they attack the flats, Burrow throws right behind them to Higgins on the quick hook route inside.

Focusing on only one defender also got Burrow into trouble once defenders caught onto the Cincinnati quick game. The Bengals here are running a double slant concept – something they’d run many times before. If the defense takes away the inside slant, that leaves a window outside for the second slant. That’s exactly what happens, except for the linebacker is reading Burrow’s eyes. As soon as he flips to read the concept, the linebacker first walls off the window for the inside slant and then immediately widens outside to the second slant. Burrow expects that second window to be open. However, the linebacker has widened right underneath it and intercepts the ball.

It’s no surprise that Burrow would lean on keying one defender and that his reads ended up being rushed because of his poor protection. However, the results were… unflattering at times. In a number of situations, he missed late rotations or threw the ball before diagnosing what was happening. The Colts here are disguising their coverage and shift into Cover 4 post-snap. Usually, that leaves the middle of the field open. However, the safety to the boundary is keying off of the #3 receiver. That receiver is his responsibility if they go deep and inside – which is exactly what happens. There’s no route on the single receiver side to hold him, so he’s free to roam in the middle. Burrow expects him to be out of the picture and throws the post. That safety to reads Burrow’s eyes and jump in front of the route.

Joe Burrow has also had some issues with ball placement on deep throws for the Bengals. There were a lot of points left on the field because of that. A lot of it has to do with his mechanics. When he loads up to go deep, he’ll often start his forward throwing motion with his arm. For quarterbacks, it has to start with their feet and radiate up like a whip through their hips. Their elbow leads the throw, but it’s the last link in the chain to get the most power and velocity on the ball. On this throw against the Colts, Burrow’s upper body is leading the throw. That causes him to lose power and for it to be underthrown. His receiver has won the route and Burrow has the chance to set his feet and throw this, but he doesn’t get enough on it to lead the receiver into the endzone.

Open receivers that were underthrown on deep balls was a recurring problem for Burrow. He has a tendency to rise as he’s throwing the ball and fall away from the throw. That can cause vertical inaccuracy or for the ball to hang in the air. Rising from a bent knee position as you’re throwing adds one more thing for your body to compensate for on the throw.

At the NFL level, that ball placement is an issue. Tipped balls turn into interceptions, balls that are slightly off prevent receivers from running after the catch and extending drives, and turns touchdowns into incompletions. Borrow again is rising as he throws this ball and instead of leading his receiver to the sideline, throws it high and away which allows the safety to contest the catch and cause an incompletion.

Again, this is all in the context of understanding that Burrow was under a lot of pressure on almost all of his drop backs. Burrow made plays on the move throughout the season that showed his talent, but he also made plays like this where he’s falling away under pressure and underthrows a touchdown for an interception.

Joe Burrow showed escapability and touch on throws on the move which should excite Bengals fans. Burrow has exceptional accuracy at times and has a knack for making things happen downfield after extending the play. The Bengals had a lot of isolation routes and they didn’t do a great job of scheming things open for him which forced Burrow to have to extend plays and throw with anticipation.

What Bengals fans should be nervous about, is the offensive line and the hits Burrow has already been taking. Penei Sewell won’t fix it all. The Bengals tried to combat the pressure by going to a lot of empty formations and getting the ball out quickly, but the offensive line could not hold up with any sort of consistency – especially without help. Even when they did leave in help, the protection plan was often baffling. They’d leave tight ends or receivers on defensive ends, be incapable of picking up stunts, and generally got overpowered.

There’s a lot to be excited about for Joe Burrow and the Bengals. He showed glimpses of why he was the #1 overall pick, but he also showed glimpses of some concerning trends. The weapons on offense are there for Burrow, the offensive line and protection clearly aren’t. If they add a couple pieces in free agency and add Sewell in the draft, though, this offense could quickly become one of the better units in the league. With time to build strength after his ACL tear and another season in the league, Burrow could show everyone that the Bengals are back.