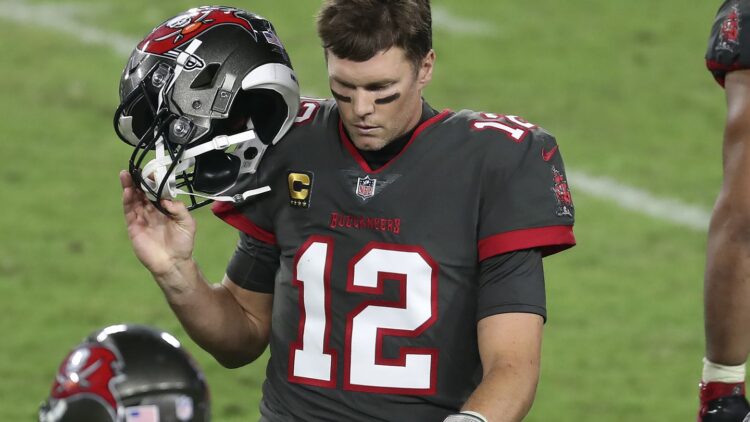 There are some concerns to be had about Tom Brady’s deep ball in Arians’ system. The Buccaneers are 7-5, are ranked 9th in passing yards per game and 15th in total offense through Week 12. On the flip side, Tom Brady has had flat out awful stretches through the season. He has had two separate four-week spans where he was 3/28 and then 0/19 on deep passes. These lulls are what cause the Buccaneers offensive inconsistencies from week-to-week.

Brady is having difficulty reading deep at times, having miscommunications with his receivers, and has also developed some mechanical issues when he tries to push the ball downfield. To understand why Brady is struggling, we also need to know what he does well. Tom Brady’s deep ball issues aren’t because of arm strength. He is still lethal in the intermediate game and shows great anticipation and touch.

When Brady can key off linebackers underneath, he’s still one of the best in the league. Here Tampa Bay is running two posts with what is supposed to be an underneath drag and a sit route. The linebacker is supposed to be put in conflict by the drag and the post. That drag doesn’t come because of some miscommunication, but the defender moves himself out of position anyways. Brady is throwing the post to Mike Evans and he’s starting his throwing motion before Evans has even turned his head. He’s locating that underneath defender, sees that his hips are turned to the outside, and that he’s flowing away from the window to the post. Brady throws a perfect strike right in the soft spot of the defense and protects his receiver from a big hit. Tom Brady’s deep ball isn’t dead — it’s just being used in the wrong ways.

Brady isn’t suffering dwindling arm strength either. When Brady throws deep on rhythm, he has elite touch and accuracy. This is one of the Buccaneers favorite deep concepts with two deep crossers intersecting across the field. It puts single high safeties in conflict, makes defenders transfer zones, or forces the defense to run with some really talented receivers for the Bucs. It also fits Brady’s ability to throw rhythm deep balls while also allowing him to read underneath defenders.

As soon as Brady comes out of the play fake here, all he has to do is locate where the corner is and whether the Raiders defense is going to exchange zones or is matched up in man coverage. He sees that the Raiders are running with their receivers and he knows all he needs to do is put some air under the ball and let Scotty Miller run underneath it. He throws off one hitch, is decisive, and delivers a great ball.

These rhythm deep balls and anticipation throws in the middle of the field are where Tom Brady’s deep ball still thrives. It shortens the throw and it mirrors the system that he ran in New England with McDaniels. It fits Brady’s skill set and arm talent and it allows some very talented Tampa Bay receivers to get the ball in space and attack linebackers in the middle of the field.

We understand what he does well but let’s look at the main issues that keep popping up. Brady does not read deep defenders very well and has begun to stare down deep routes. So, if he isn’t throwing those deep routes on time, it allows defenders to read his eyes, flow to that side and impact the throws.

In his final drive against the Rams, Brady makes an almost rookie mistake. The Rams are showing a two high look but buzzing to Cover 1 Robber. The boundary side safety comes down to rob the middle of the field and the field side safety rotates up to the deep middle. Brady stares down his receiver to the top of the screen the entire way. He assumes since the safety to that side came down, he has room deep. But if that guy is coming down, there’s almost always going to be a guy coming to replace him. Brady doesn’t recognize the safety rotation and throws a ball like he’s expecting nobody to come help over the top of the route. This allows the other safety to get over and intercept the ball and seal the game for the Rams.

This issue of not locating safeties has been happening more and more frequently. He doesn’t locate safeties and doesn’t throw the appropriate ball because of it. He’ll put too much air on the ball which lets defenders make plays and makes things tough for his receivers. Here he has Mike Evans on Ramsey but the Rams are giving help over the top with #43. Brady throws up a deep ball but with the Safety already leaning to that side, that window is very small and there’s almost no way to squeeze this ball in for a completion and it really should have been intercepted.

Especially when facing pressure along with it, Brady has left some plays on the field. Against Kansas City, the Chiefs are bringing a zero blitz which leaves the two deep safeties in man coverage on the slot receiver and the tight end. Generally, in zero, you want to attack the middle of the field because there’s no safety help there. With the tight end Cameron Brate going to the flats, that removes the boundary safety because he has to come down on him in man coverage. This leaves the post to Godwin wide open. Instead of diagnosing the blitz and having a plan for it by attacking the post, he throws the ball out of bounds to Antonio Brown who is running a double move.

Brady struggles with safety reads but he also has a mechanical issue. Heel click is a pretty simple mechanical issue and it can cause some big vertical accuracy issues. Heel click is when your feet come together on your hitch step. That action causes you to change vertical levels as a quarterback. As a consequence, that can make your throws go high or low. You want your hips to stay on the same horizontal plane. This heel click happens a lot when he is pushing the ball deep and it’s causing a lot of inaccuracy.

You can see on this clip how he has that heel click and how much his hips sink and raise on the throw. That vertical displacement ultimately causes the accuracy issue.

For quarterbacks it’s all about consistency and Brady just doesn’t have it here. If your platform and your base change from throw to throw it’s going to be hard to be consistently accurate.

Finally, there are some miscommunications between he and his receivers. He’ll throw fades when receivers stop for back-shoulders and vice versa. You can see a great example of that here as the Bucs are running verts switch. The two receivers are exchanging and switching their routes. The slot goes out to the fade and the outside receiver comes inside for the seam.

Brady decides on the slot fade but he makes the incorrect decision to throw the ball deep. On fades like this, you’re reading leverage. If that defensive back is stacked on top, the quarterback and receiver are taught to work the back-shoulder. If they’re even, you throw the fade. Here clearly the corner is on top of Chris Godwin which means this should be a back-shoulder. That’s exactly what Godwin is reading here. It’s an example of not being on the same page and it happens often even this far into the season.

You can see that same exact concept here with Antonio Brown. Brown feels that the defensive back has leverage on him so he snaps the route off for a back-shoulder. Brady has meanwhile already begun his throwing motion for a fade.

Brady’s struggles reading deep safeties, his footwork issues, and the receiver miscommunications has led to Brady and that offense getting bogged down at times. Combine that with a rushing offense that ranks 28th and it can be hard to sustain offense.

The Bucs will be just fine though. Even with these issues, they’re scoring the 7th most points in the league. When your offense goes through the deep ball and the deep ball isn’t hitting, you’re going to see these inconsistent games and performances from Tampa Bay. To even out these performances and take the offense to the next step, there needs to be a blending of Arians’ scheme and Brady’s skill set. Use Brady’s elite intermediate throwing and use rhythm shots for the deep ball. Tampa is right on track for the playoffs and if that defense also evens out and gets more consistent in the secondary nobody will want to see playoff Brady roll into town with the weapons and tools that Tampa has.