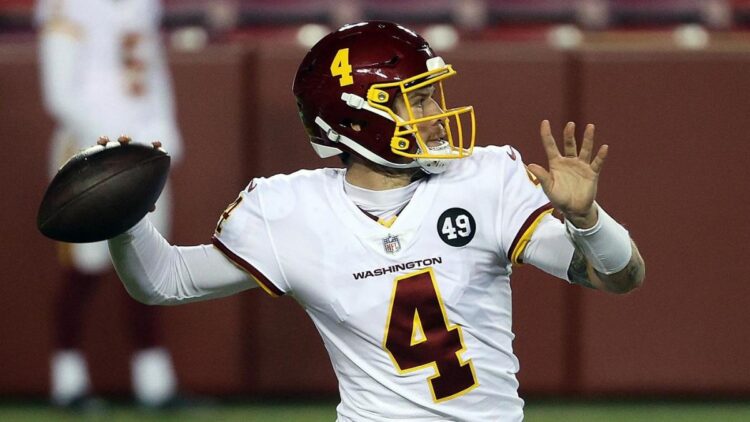 LANDOVER, MARYLAND - JANUARY 09: Quarterback Taylor Heinicke #4 of the Washington Football Team passes during the 1st quarter of the game against the Tampa Bay Buccaneers at FedExField on January 09, 2021 in Landover, Maryland. (Photo by Patrick Smith/Getty Images)

Taylor Heinicke made just his second start in Washington’s playoff game against Tampa Bay and Tom Brady. Heinicke read the Tampa defense well, had some nice ball placement, and his mobility helped move the offense and keep them on schedule. While he did have a couple issues with late reads and bringing his eyes down with pressure on scrambles, Taylor Heinicke played really well against a team many people think have a shot at the Super Bowl.

This play in the first quarter is a really good example of Heinicke both identifying coverage and throwing with some really nice anticipation. Washington is running a Smash concept to the top of the screen. The #1 receiver to the outside is running a corner and the #3 inside receiver is running a quick out. That puts the flat defender in a bind for Tampa Bay. Tampa is running Cover 6 which means the corner at the top of the screen is responsible for the deep quarter and the slot corner inside has the flats. However, the corner takes the bait on the out which opens up the corner route behind him. Heinicke diagnoses this incredibly quickly and throws the ball before the receiver has even cut.

Tampa also loves to throw a ton of pressure a quarterbacks and Saturday against Washington was no different. Heinicke understood where pressure was coming from and threw to vacated zones. On this play in the 2nd quarter, the Buccaneers are bringing a zero blitz. As soon as the ball is snapped, Heinicke looks to locate the defender over his tight end. When he sees him stay low, he knows nobody will be under the deep out to the top of the screen. With pressure in his face, he again throws with anticipation before the receiver has gotten out of their break.

Taylor Heinicke’s mobility was also a huge help to the Washington offense. While his scrambles were fun to watch, he also showed really good pocket presence. That movement in tight spaces made a huge difference in being able to extend plays and take off for gains on the ground or to buy time for receivers to get open.

While he was inconsistent here, he did make a couple of throws while on the move rather than taking off and getting yards with his feet.

Heinicke did show the ability to keep his eyes downfield, but he also had issues lowering his eyes and looking for running lanes. That’s not the worst thing in the world when you’re having success with it, but a couple times he missed receivers deep that were behind their defenders in coverage.

For the most part, Heinicke played a pretty clean game as far as decision making but there were one or two throws where he failed to locate underneath defenders and it almost got him in trouble. When you throw routes with anticipation, you do need to locate the defenders that can impact those throws before making them. Sometimes Heinicke bypassed that portion of the read and locked onto the receiver he wanted to throw to. If Heinicke throws this post earlier without that final side step in the pocket, this ball has a good chance of being completed. It’s a tight window, but the inside post is occupying the safety and there is enough room to squeeze it in. By waiting that extra beat and staring down the receiver, it gives the safety and the underneath defender the chance to get under the ball and tip it into the air.

Heinicke put on a really impressive performance and the good outweighed the bad. He made some nice reads with good anticipation against the 5th ranked Tampa Bay defense. He’s now a restricted free agent and deserves a look in the NFL. He showed starting caliber accuracy, reads, and decision-making throughout the game and gave Washington a chance to win. It was a very impressive start for him and a nice performance from Washington who a lot of people wrote off multiple times during the season.