The Packers RPOs were the key to victory over the Rams 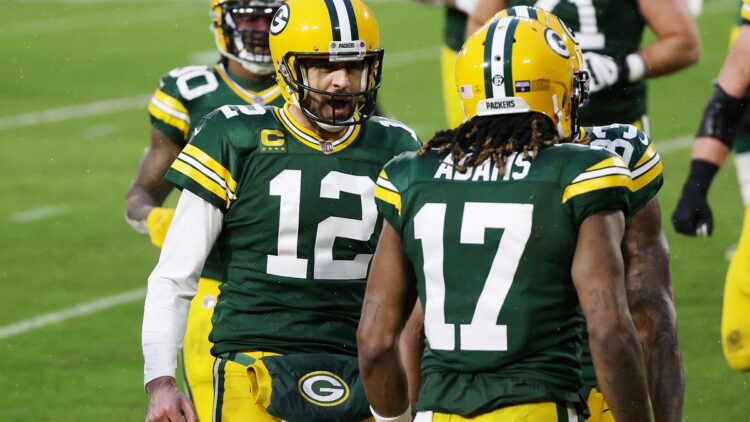 The Green Bay Packers’ number one offense was the clear winner on Saturday when they went up against the Rams and their first ranked defense. They put up 488 yards, 32 points, 28 first downs, and had no turnovers or sacks. A big part of the Packers and Matt LaFleur’s game plan was to utilize RPOs and access throws. The Rams defense doesn’t give you much, so when you can exploit a numbers advantage, you have to take advantage of that opportunity.

The Packers’ RPOs weren’t flashy, but they consistently got Green Bay positive yards. That was critical to keep them on schedule against that Rams defense.

The Packers used this two-back RPO with Aaron Jones and AJ Dillon seven separate times against the Rams. While they handed it off every time, they got a little over four yards per carry off of this play.

What this play was doing for the Packers was removing a player from the box. The Rams base out of two high safeties, which already leaves them pretty light at the line of scrimmage. They trust that their front will control the line of scrimmage. In turn, that allows their safeties to fit and fill their run gaps from depth.

By motioning Aaron Jones out wide to run a bubble and keeping AJ Dillon in to run their zone scheme, they pull the only linebacker the Rams have out of the box to cover the bubble. That leaves five linemen on five defensive linemen. It’s up to the safeties to be the free hitters and make the tackle. All Aaron Rodgers is reading here is whether he has a numbers advantage in the box. As soon as that linebacker bumps out, he knows he’s handing it off.

The Packers always ran this running back bubble motion to the field because of how the Rams were aligning. Out of that two-back set, the Rams put their linebacker, Troy Reeder, to the field and receiver strength. The Packers would run the outside zone to the boundary away from the motion. The Packers knew that the Rams’ adjustment to this motion was to bump that field linebacker out so that the defense maintains numbers to the receiver strength.

Even when the Rams went to a 4-2 front with two linebackers, it still left them short-handed in the box. As long as that linebacker keeps bumping out and giving the numbers advantage to the offensive line, Rodgers is going to keep handing the ball off.

With 8:30 left in the 3rd quarter, the Rams finally made an adjustment to stop this. Now on that motion, the linebacker still bumps out, but the safety immediately comes down to replace him. That gives the Rams a man advantage at the line of scrimmage. On the two plays where they made this adjustment, the Packers ran for a two-yard gain and then fumbled on the next play. They never ran it again during the game.

Wrinkle off of the two-back RPO

While not an RPO, the Packers did show the same look, but on a pure drop back from Rodgers. Both times they hit Davante Adams on a slant away from the motion. The motion makes people bump over and create more space in the middle of the field. That allows for a true one-on-one outside for Davante Adams and a lot of space to work with.

The Packers also use a lot of motions and shifts and implemented some of their RPOs into those movements. Here, Davante Adams is shifting over to a twins look at the top of the screen. With the corner at the top walked up in press and the defender following Adams over, Rodgers knows that it’s man coverage. Against that look, he likes the bubble outside to Adams because it gives the Packers an extra blocker. What’s clever about this and what speaks to Allen Lazard’s football IQ is that since this is man coverage and the corner over Adams is off, Lazard can release vertically for a few steps to run his man off the ball. He knows that the corner will turn to the sideline and it’ll give more space for Adams to work. Lazard isn’t going to block that guy though. His job is to block the man over Adams because he’s the free defender. Lazard creates space by pushing vertically, then comes in to get a piece of the slot defender. That essentially gets the Packers a two-for-one block and allows Adams to pick up the first down.

Here, we really have the same concept as what we saw with the two-back sets from the Packers and motioning Aaron Jones out. If someone bumps over on the motion to cover the bubble, Rodgers hands it off. If they don’t, he throws it. These are pre-snap reads. Rodgers knows by the snap of the ball what the defense has done to adjust and whether he’s going to throw it or hand it off. That motion and threat of the bubble or arrow outside influences the defense and moves guys out of position. As a result, big holes can start to open up with a numbers advantage shifting to the offense.

The Packers used that same motion and read on their first touchdown of the game to Davante Adams. Nobody leaves the box to help cover the motion by Adams, Adams has leverage on Jalen Ramsey, and Rodgers knows before the snap that he has the throw open in the flats. Instead of handing the ball off, he pulls the ball and throws it for the touchdown.

The Packers RPOs will use that arrow and bubble look multiple different ways. If there’s a numbers advantage, the Packers have some really good blocking receivers outside. If there’s only three defenders on the three receivers, Rodgers will throw the ball.

While they didn’t hit this during the game, the Packers also have a wrinkle off of that bubble look for the other receiver where they run a spot routes to attack defenders that over-flow to the bubble. Now if the man over the bubble route chases, the middle slot player will curl up in the spot right where they’ve vacated. It’s still a true RPO for Rodgers and he can decide to give the ball or throw that spot right behind the chasing defender.

To finish up, the Packers have a really simple access throw bubble to the single receiver if they see off coverage. They only run this while under center and it’s a pure pre-snap read for Rodgers. By bubbling, the receiver is pulling the defender even further from contributing in run support. The Packers showed this a couple times and at the end of the game, they finally threw it to Adams. It’s a true one-on-one in the open field. With the amount of cushion, it gives Adams time to react and make a move to gain yards.

These Packers RPOs weren’t anything groundbreaking or revolutionary from LaFleur and Rodgers, but they attacked a very disciplined and talented defense and took what they gave them. They didn’t try to press and attack where the Rams had the numbers. They trusted their players to make plays in one-on-one situations. All of these plays add up. While they may be dinks and dunks, eventually you pop a big one because defenses are so concerned about you throwing those RPOs and access throws. Those little designs and wrinkles that are continually added in are setting the Packers up for success and the way the offense is operating right now, it doesn’t look like anybody is going to be able to stop them.