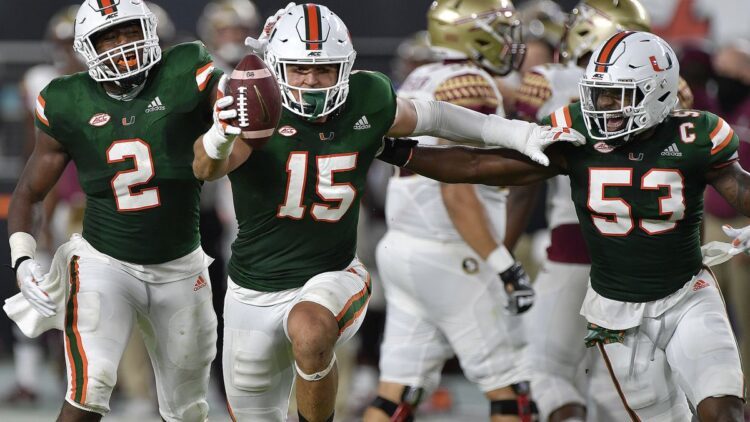 As the number one overall high school recruit in 2017, Jaelan Phillips had his pick of where he wanted to go to school. Ultimately, the SoCal native stayed home and enrolled at UCLA hoping to revive a once-great program. However, things did not go as expected. In 2018, Phillips medically retired from football. After a change of heart, Phillips decided to return to the sport and joined the Miami Hurricanes. In his only season in South Beach, Phillips played out of his mind and saw his draft stock shoot through the roof. Blessed with all of the physical tools, Phillips is finally starting to put it all together at the right time.

Phillips has always been a physical freak, which is one reason why he was so highly regarded out of high school. People as big as Phillips should not move as fluidly as he does. His initial burst off of the line is quick and his body control is special. Many of the plays he makes, he simply can’t be blocked. There’s nothing technical the offensive lineman can do to stop Phillips when he’s at his best.

Getting To The Quarterback

Edge rushers are the most important players on a defense. Phillips had eight sacks in his lone season at Miami, but seemed to always be in the face of the quarterback. He has a plethora of pass rush moves at his disposal which makes it difficult to game plan against him.

Against the run, the job of the defensive end is to set the edge. Phillips stays disciplined in his approach and stays wide every time. He won’t be fooled by trickery and stays home on reverses or jet sweeps.

If Phillips had a clean bill of health, he’d be a top 15 pick. However, he has a history with concussions, which is worrisome. While we don’t know exactly how many he’s had, the fact it got to the point where he decided to stop playing means it’s a serious issue. I’m not a doctor nor will ever pretend to be one, but I could see several teams taking him off of their draft boards because of his medical history.

There were too many times where Phillips played too upright. When he maintained his low pad level, he was unstoppable. On the other hand, when he didn’t maintain proper pad level, he got stood up and no penetration. He’s still a relatively raw player, so this could be improved over time.

The sky is truly the limit for Jaelan Phillips. If he can put all the pieces together and stay healthy, he will become one of the most dominant players from this draft class. He has the athleticism and IQ that most players dream of, but also has some worrisome injuries that could derail his career. This pre-draft process will be much different, particularly in terms of medicals. If he can pass that, he’s a slam dunk first-rounder. If he can’t, a team will have to take a gamble on a high-ceiling potential superstar.