What’s Next for Julio Jones?

Almost a month ago, Aaron Rodgers rocked the league with the news he was possibly done with the Green Bay Packers. Now, another future Hall of Famer is looking to force their way out of an organization they have spent a decade with. Julio Jones has one of the greatest career resumes of any wide receiver. A seven-time Pro-Bowler, two-time first team All-Pro, and seven seasons of over 1,000 receiving yards. Julio is as good as they come. As he enters his age 32 season off a year in which he missed seven games, there are questions on whether he can still be the dominant force that fans have come to know him as. One thing is for certain, there is a good chance that Jones will be suiting up for another organization come the kickoff of this season.

This Monday on the sports talk show “Undisputed” Shannon Sharpe called Julio Jones on live television and Jones not only expressed his desire to leave Atlanta, but also to play for a winning organization. Now, the reports are coming in that the New England Patriots and Tennessee Titans are the leading candidates to land the all-world receiver. For the Patriots, this move would cap off a highly aggressive offseason. It would also bring in the greatest outside receiving threat Bill Belichick has had since Randy Moss in the mid-2000s. While Cam Newton struggled last year, he lacked any proven receiving threat for most of the season. Now he could have a corps of Hunter Henry, Jonnu Smith, and Julio Jones which would allow him to work both the middle of the field and stretch the offense with Jones outside. Secondly, if the Patriots decide to hand the reigns over to rookie Mac Jones, having a Hall of Fame player operate as his safety blanket would work wonders for his confidence and completion percentage. Even at 31 years old, Jones averaged roughly 93 yards per game. If he can stay healthy there is no reason to expect him to decline regardless of who is quarterback.  Lastly, and possibly most beneficial, is the fact that the Patriots would not need to move any money around or restructure any contracts to add Julio to their roster. 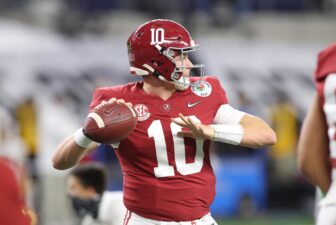 If Jones finds himself in Tennessee, the Titans could field one of the best offenses in football. Derrick Henry is an unstoppable force with the ball in his hands and is primed for another monster season. A.J Brown continues to build chemistry with Ryan Tannehill and is coming off his second consecutive thousand-yard season. The addition of Julio Jones gives them arguably the best wide receiver duo in the league and will force opposing defenses to pay less attention to Henry in the backfield. This offensive core would dominate the AFC South for years as both the Jacksonville Jaguars and Houston Texans rebuild and Indianapolis continues the hunt for a franchise signal caller. The only possible hurdle will be the financials. In acquiring Jones, the Titans would need to find a way to clear roughly $11.7 million in cap space which can be difficult as the offseason winds down.

Julio Jones is a generational talent. His 95.5 receiving yards per game ranks as the highest mark in NFL history. The only thing left for him to achieve is a championship ring. Both the Titans and Patriots offer a great chance to win. In Tennessee he joins an offense filled with star players looking for a veteran leader. With the Patriots, Jones will pair up with one of the greatest coaches in the history of the sport.