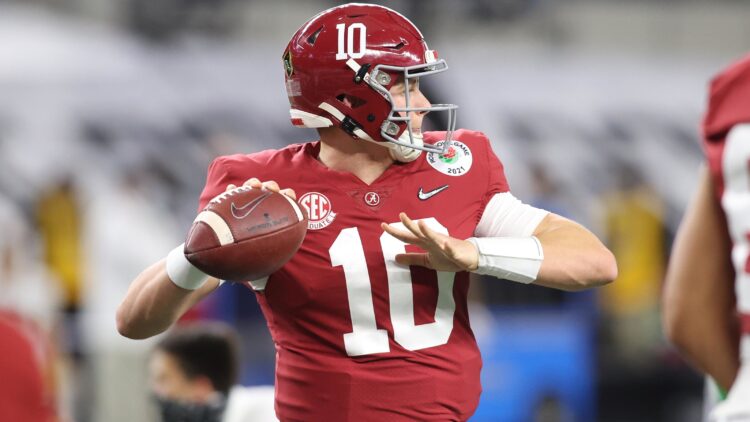 Mac Jones put himself on the map and has even climbed into first round conversations after his redshirt Junior year at Alabama. He put up 4,500 yards, 41 touchdowns, and led the Crimson Tide to the College Football Championship. Jones’ best traits are his quick decision making, touch on his throws, and ability to layer the ball throughout the defense. While he’s not going to blow you away with arm strength, he has enough to make the throws you need him to. However, some of his mechanics – especially on deep balls – were inconsistent. While he ran the Alabama offense efficiently and distributed the ball with some really nice accuracy, 34% of his attempts were targeted at or behind the line of scrimmage. The system at Alabama fit him perfectly and that’s something that will be important for Jones in the NFL.

Some of the ball placement and reads from Mac Jones were incredibly impressive. He consistently threw receivers to space and put the ball in a spot where his guy could go make a play.

Off of the fake fire screen underneath, Jonesonly has one place to go with the ball. Devonta Smith is double covered up top and that leaves his tight end down the sideline. Jones quickly diagnoses that the defender is trailing without eyes on the ball. He shows great touch and puts the ball right over the trailing defenders head to give his guy an opportunity.

Read More: Najee Harris: From The Bay To Bama

Jones consistently showed the ability to make precise throws against good coverage. The subtle adjustments on ball placement when defenders are trailing or breaking on routes is a really good indicator for his success at the next level. When he has a clean pocket and can line up his throw, the accuracy is NFL level.

Being able to lead receivers to space is one of Mac Jones’ best traits. After seeing the linebacker start to get depth under this deep curl, Mac Jones not only is able to provide touch to get the ball up and down over that linebacker, but also leads his receiver away from that defender.

When you combine accuracy in the intermediate and underneath with the ability to throw with anticipation, you have a quarterback that can do some damage in a timing and rhythm-based offense. You can see glimpses of those types of plays throughout his Junior year where he’s throwing guys to grass or releasing the ball before his receivers have gotten out of their breaks.

A great example of Jones’ ability to read, diagnose, and then throw with anticipation is on this play against Florida. Alabama is trying to clear out the wide side of the field for a deep crosser.

That requires Jones to diagnose the leverage of the safety and corner and throw his receiver to space. The two posts from the top are able to turn the hips of both the safety and the corner. Before that crosser has opened up, Jones is able to recognize that, confirm that there’s no flat defender getting underneath the crosser, and throw his man to open field to allow him to catch on the run and score.

Jones isn’t going to wow you with his athleticism. He is a true pocket passer. However, he showed the ability to throw under pressure and continue to be accurate. While he wasn’t consistent here and had some real problems under pressure, it is good to see that he can deal with it. Alabama is running the Dagger concept to the top of the screen with a clear out from the slot and a dig from the #1 receiver outside. Jones’ left tackle gets beat on the play, but Jones feels that and is able to get the ball out with anticipation to his receiver.

While Jones’ deep ball isn’t anything to write home about, he can make whatever throw you need him to. It limits him in some ways, but for most offenses and throws, he’s fine. He made out-breaking throws from the opposite hash, showed the ability to attack vertically, and let his receivers run under the ball on break-away plays.

Adding to the narrative that Jones would be a good fit for a West Coast or rhythm offense is Alabama’s reliance on RPOs and quick reads. Jones feasted on the glance route throughout the season which allows him to key off of just one defender. A glance route is an RPO with a receiver running a short post that hits behind linebackers that come up on the run. If that defender comes up, there’s a window right behind on the glance. That’s exactly the kind of quick decision making he’ll need to perform at his best in the NFL. He might not be a guy that can sling it all over the place, but in a system that’s designed for him, he has the quick processing and accuracy to make things happen.

Where Mac Jones can really start to struggle though, is his ability to stay calm in the pocket and with his deep ball mechanics. Through his Junior year, he showed the ability to deal with pressure as displayed earlier, but a lot of the time, he got jittery and would lose his base and mechanics. Once he gets his hips parallel to the line of scrimmage, he gets himself into trouble. That prevents him from getting good hip rotation, reduced his accuracy, and really impacted his throws.

Jones’ biggest tendency is to have shoulder dip and over rotate. Against Florida, Jones has both of those issues come up. While scooting out of the pocket, Jones is trying to drive the ball between the safety and the corner down the field. At his release point, his shoulders are slanted towards the ground which changes the trajectory of the ball and forces a higher release. To get the power on the throw, Jones also over rotates and is off balance. Those two things cause the ball to sail high on Jones.

When that over rotation happens, he will pull balls to the left. The hips and momentum are carrying him that way and that’s the way the ball is going to want to go.

This issue came up again and again through the season. Shoulder lean causes the ball to go high, over rotation causes the ball to pull left. Throws that should be made are instead made more difficult. These issues usually cropped up when he was pushing the ball vertically. Again here, you can see the large lean in his shoulders as he releases the ball which causes it to go high.

When you have big opportunities like this in the NFL, you have to hit them. Especially in clean pockets, these deep ball mechanics need to be cleaned up.

Mac Jones has some really exciting accuracy and largely is very efficient at putting touch on the ball, layering it over defenses, and surveying the field. When he’s throwing on time and with anticipation, he’s hard to stop. If he cleans up some of the deep ball mechanics, he can be a solid starting quarterback in the NFL. With the right system and a couple playmakers around him, he can make an immediate impact and elevate an offense. His accuracy, decision making, and touch are all top tier. He’s not a finished product and may have a bit of a ceiling athletically, but he leads and he wins. Ultimately, that’s what you want from your quarterback.