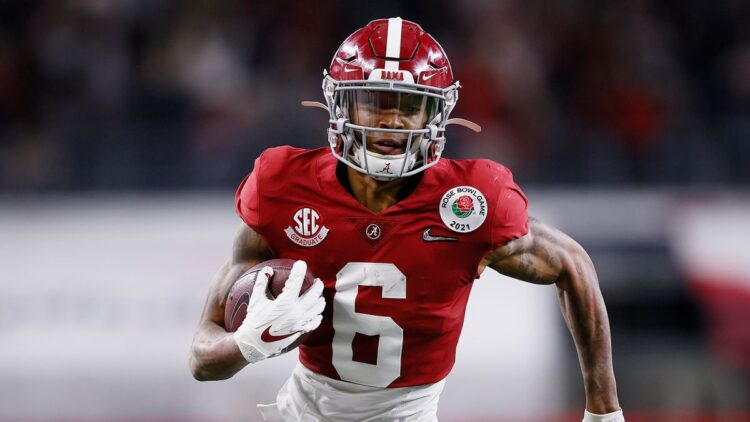 There was not a better player this past season than Alabama’s Devonta Smith who was appropriately awarded the Heisman trophy. Smith was the first wide receiver to win the award since Desmond Howard in 1991. He’s the “least flashy” of the Alabama four (Devonta Smith, Jaylen Waddle, Jerry Jeudy, and Henry Ruggs), but has the most career production which has led to him breaking the record for the SEC receiving career touchdown total. Like I said earlier, Smith isn’t the fastest or the strongest, but he does everything well. While he’s not going to make many “wow” plays like a Deandre Hopkins or a Julio Jones type player, I think he can become a legitimate receiver in the league for many years to come. Some guys have to rely on their athleticism or size to to get open, but a guy like Smith knows how to succeed because he’s a true student of the game.

In terms of pure route-running, I don’t think there’s anyone better in this receiving class than Devonta Smith. He doesn’t have the measurables or speed to consistently beat defensive backs, so he has to rely on precise routes and cuts to get open. An underrated part of getting open is making subtle head or hip movements that will force the defensive backs into being flat-footed. Smith excels at all three levels and it’s because he has an incredible understanding of the game and how to get open. In fact, I would say he’s better than most NFL receivers at route running due to the fact he’s able to get open in so many different ways. It’s a luxury for any receivers coach to have a rookie next year with a veteran understanding of the game.

Being able to get open means nothing if you can’t come down with the ball. Devonta Smith has soft hands and will hold onto the ball despite being on the receiving end of a big hit. On passes down the field, he does a superb job of high pointing the ball and attacking it in the air. By doing this, he gives himself a better chance to come down with the ball and if he doesn’t, he’s probably drawing a flag.

For a guy of his size and stature, he’s not as fast as you would think. However, he’s still able to run past and around defenders when the ball is in his hands. The Alabama offense is predicated on being able to run successful screens and having the skill players make plays. Jaylen Waddle, Henry Ruggs, and Jerry Jeudy were more athletically gifted than Devonta Smith, but he’s been the one getting the most targets and having the most production. A good way to describe Smith as a runner is slippery. Because of his high football IQ, he understands angles and how to attack holes to run through. During the regular season, over half of his receiving yards came after the catch. For a guy who had over 1,500 yards, that is tough to do unless you’re a player of Smith’s caliber. He might not be blazing fast, but definitely is fast enough.

No matter what you tell him to do, Smith will do it at a high level. He’s returned punts for touchdowns, has made game-breaking catches, and even blocked defenders to spring big plays for Najee Harris. He absolutely should have been the Heisman winner this year and not just for his stats. There wasn’t a better all-around player in the country. Long story short, he’s a coach’s dream.

At 6-1, 174 pounds, you have to worry about the fact he might be prone to injuries. Alabama typically turns their guys into muscle-bound freaks who are ready to endure a long sixteen game season as a rookie. Smith on the other hand looks like he hasn’t spent much time inside of a weight room. Even getting up to 190 pounds would do wonders for Smith and hopefully negate some concerns. Because of his lack of athleticism for his size, he’s going to get hit a lot. Can he hold up?

How much better can Smith get? This might be a stupid question because right now he’s a stud and the most productive receiver stat-wise, but he’s a relatively finished product as a player. He’s a senior who is already strong in the technical aspects of the game. This seems like a stupid reason to not draft someone, but teams want a player who will get better every season.

If a team wants to build a winning culture, you need guys like Smith. He’s not a special athlete like Waddle or Ja’Marr Chase, but he’s a safe prospect. You know that he’ll be a reliable target that can get open when a big play is needed. I think Daniel Jeremiah had the perfect pro comparison for him with Marvin Harrison. They’re both smaller built receivers but always get open. In terms of where he’ll be drafted, he’s obviously a first-rounder, but where is a mystery. I think he’s rising up the boards with a chance to become WR1 based on the season he’s had so far. Philadelphia, Detroit, New England, and Baltimore will all be teams in need of receiver help and can use a leader like Smith.