The most basic and most widely used play in play-action – especially on boots and rollouts – is Sail. Sail overloads one side of the defense with three routes at three different depths. With this spacing, the defensive zones are flooded with three receivers against two defenders. That puts those defenders in conflict. Whichever route they choose to defend, the quarterback can throw off of their movement. The vertical route is usually used to clear out the deep defender and the offense is then able to put the flat defender in a high-low read on the intermediate and flat route.

This version of Sail is called “Rider” in Shanahan’s playbook. There is a vertical takeoff route from the #1 to the top of the screen, a hi-cross at 18-22 yards from the #1 receiver to the bottom of the screen, and the jet motion fake acts as the flat route underneath. As Garoppolo turns around, he checks the vertical route in case they have gotten behind the defense. In this case, it hasn’t, but it has cleared space underneath. With the play-action, the linebackers have come up and that leaves space for the hi-cross coming in from the other side of the field.

There are an incredible amount of ways to get to the same concept. With trips away from the direction of the boot, the 49ers create the same stress on the defense against Miami’s man coverage. The #3 receiver is running the vertical clear out, the #2 is crunching behind the line of scrimmage to the flat, and the #1 is running the intermediate route. With the vertical route inside, that creates a natural rub and separation for the #2 receiver running the flat. Generally, when running boots, the quarterback will read low to high. If the flat is there, they’ll take it. That’s exactly what happens off the play-action with the receiver wide open for a run after catch opportunity.

Shanahan loves to run outside zone one way and the Sail concept back the other because it puts the defense in immense flow conflict. The offense is stressing the defense to the extreme on both horizontal ends of the field. If they honor the threat of the outside run, they won’t be in position for the boot the other way and vice-versa. Here, the 49ers use a crunch from their H-back to get to the flats and it’s wide open because the defense has collapsed on the run fake. 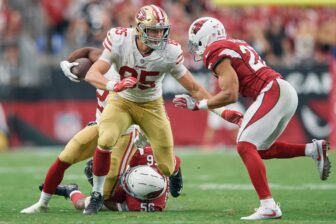 Also Read:
The Little Things George Kittle Does to Improve the 49ers Offense

There are so many horizontal stressors from the offense that it’s incredibly hard for defenses to be in position to stop both threats.

Counters Off of Sail

Off of the Sail concept itself, there are also two specific counter plays that Shanahan likes to run. Y-Delay and a corner-post from the vertical receiver. Both punish the defense for reacting too hard to the Sail concept. Here is there corner-post off Sail.

With their second counter-punch, the Y-delay, the 49ers are selling an outside zone block from a receiver or a tight end that’s tight to the formation.

Off of these play action looks, the 49ers will also run throwback screens.

To see more in-depth breakdowns of these counter plays, check out the video above or visit our YouTube channel.

As with most plays, the one thing that can kill play-action is pressure. Play-action is longer developing and often only has one player in the flats. If that player is covered, you’re in trouble because you don’t have anywhere else to go with the ball.

Shanahan’s playbook is filled with counters to his base bread and butter plays. He stretches defenses with horizontal flow in two directions and forces them to chase and cover every single area on the field. If there’s a mental lapse or he sees a tendency in coverage, he’ll throw in one of those counters to make the defense pay. When you combine that with a great run game, there’s almost no winning for a defense.