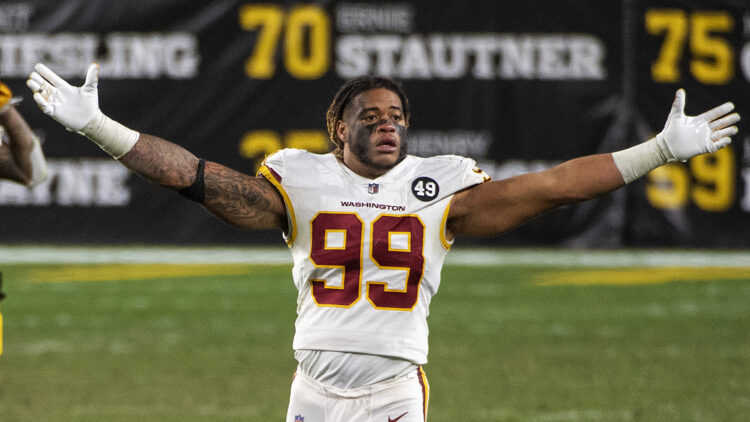 The reigning Super Bowl Champions showed us how a top defense can be a critical component to a Super Bowl run. Teams with a top defense are usually the most successful in the NFL, so here are the top five defenses that will make the most impact in 2021.

The Washington Football Team defense was a pleasant surprise in 2020. Chase Young lived up to his pre-draft hype and won Defensive Rookie of the Year with 7.5 sacks. Montez Sweat, their 2019 first round pick was critical to the defense as well, adding nine sacks of his own. This defensive unit was already dominant in 2020 after ranking 2nd in total defense, but they could be even better in 2021. They upgraded their linebacker core after drafting Jamin Davis in the first round of this year’s draft. They also found an upgrade at corner in free agency after signing William Jackson III to replace Ronald Darby. Washington has studs at all three levels of the defense with the potential to lead the league in sacks. This Washington team is a lock to have one of the best defenses in the NFL.

The Buccaneers were a prime example of how much defense truly matters. The defense dominated at the line of scrimmage with three sacks and a Super Bowl record of 29 pressures. The secondary contributed as well, adding two interceptions. Because of their success, Tampa Bay made it a priority to bring back every defensive starter for another run in 2021. This defense ranked eighth in points allowed and sixth in yards allowed in 2020 and they will only improve with more chemistry. They should also have an improved pass rush with their first round pick Joe Tryon playing alongside Shaquill Barrett. This defense did not have many needs before the draft and will be one of the most complete entering the season.

The Los Angeles Rams were phenomenal in 2020, ranking first in yards and points allowed. While they hope to have similar success, they enter 2021 with some concerns. The biggest cause for concern comes from the departure of their defensive coordinator, Brandon Staley. Staley had the Rams as the top defense in the league in 2020, but it is unsure how his absence will affect the team. The Rams also lost secondary standouts Troy Hill and John Johnson III this offseason. Hill had a career year with three interceptions and two touchdowns and PFF ranked Johnson III as the third best safety in 2020. Replacing their production is a tall task, but they still have Aaron Donald and Jalen Ramsey to keep this defense competitive. They may not be as great as last year, but they are more than capable of producing turnovers.

The Browns are coming off an encouraging season in 2020, but needed to improve defensively to become Super Bowl contenders. They made additions in free agency by signing Jadeveon Clowney to bolster the pass rush with Myles Garrett. They also signed John Johnson III and Troy Hill to add some consistency to their 26th ranked secondary. Cleveland also had one of the best drafts in the NFL after adding Greg Newsome II and Jeremiah Owusu-Koramoah. They were able to upgrade at every level of the defense, successfully addressing their most glaring needs. If Cleveland can learn to mesh, we should see this defense take a significant leap from 21st in points allowed to a top five defense in 2021.

The Patriots were affected the most by Covid-19 after leading the league in opt outs with eight. This led to a middle of the pack defense that was 15th in yards allowed. There were some positives though, since New England cracked the top 10 in points allowed. With the return of some opt outs such as Dont’a Hightower, they are looking to bounce back to their 2019 dominance. They hope to have strengthened their pass rush by adding free agents Kyle Van Noy and Matt Judon. They also drafted Christian Barmore to improve a 26th ranked rushing defense. While they may still have issues at safety after adding Jalen Mills, Stephon Gilmore and J.C. Jackson are a lockdown corner tandem. The Patriots have the talent to return to a top five defense, but will need help from their offense to stay off the field.