Is Taylor Heinicke the long-term answer for Washington?

Since Ryan Fitzpatrick went down in Week 1, Taylor Heinicke has lead Washington to a 6-6 record and right into the wildcard mix. He’s shown a penchant for making plays with his legs, throwing under pressure, and, for the most part, putting Washington in a position to win. He can get better with more experience, but he’s also already 28 years old and while he does have some exciting plays, he also has some head-scratching ones to go with them.

One of the biggest positives in Heinicke’s game is his ability to deal with pressure, change his throwing angle, and extend plays with his feet. There’s really only two ways in which a quarterback can throw the ball. On platform and off platform. In the NFL, you’ve got to be able to throw off platform and from different angles. It’s rarely a perfect world with clean pockets. While there are some things with his base and footwork that he could work on, he is usually able to generate good power from his lower body. While his body might not be in an ideal situation, he can still create the torque needed to get the ball out.

Arm angles and base

That starts with getting his back foot in the ground. While he may end up with his feet off the ground, he always gets that back foot down to initiate the throw. That allows him to push away the ground and engage his glute to then fire and start his throwing motion led by his hips. The upper body mechanics flow from that initial movement and allows him to change his arm angle to get the ball around defenders.

As with most quarterbacks, it comes down to Heinicke’s feet. When he’s able to reset and get his foot in the ground, he’s much more accurate than when he’s falling away or doesn’t have his base.

While Heinicke’s escapability and ability to throw through pressure is great, he does get a little gun shy with pressure. He’s made some great throws drifting away because of his ability to engage his hips without a solid base. However, you’re still going to be more accurate the more consistent your base is. 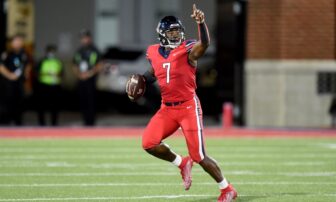 There is a fine line between letting Taylor Heinicke create outside and getting him to calm his feet. He’s very quick to try to escape instead of taking smaller movements inside the pocket. That can get him into trouble. Against the Raiders, he feels pressure and instead of climbing while keeping his shoulders square to the line of scrimmage, he turns and gets parallel. That takes him out of throwing position. He’s off balance and can’t generate power and accuracy. By engaging his lower body while his shoulders are flat to the line of scrimmage, the power he generates is going to be going the opposite direction that he’s trying to throw. As a result, the throw is all arm, flutters, and should be intercepted.

That issue tends to pop up a few times a game. He can make some great throws in these situations that other quarterbacks can’t, but he also gets himself into trouble by not throwing through contact and keeping his base. Drifting away from pressure is useful, but at the end of this throw, he’s off balance and over rotates to his left. That’s exactly the direction the ball carries and the pocket is clean enough for him to keep his base and be fundamentally sound.

Sometimes, you’ve just got to stand in and take the hit to deliver the ball accurately. Heinicke will often drift away and sacrifice accuracy to stay clean. 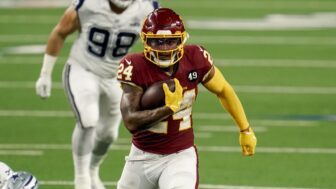 Also Read:
Antonio Gibson’s growth and the scheme problems for the offensive line

When Heinicke is in rhythm and throwing with a clean base, he’s a pretty disciplined going through his reads — though with a couple decision-making mishaps. He may not have a huge arm, be he can make every throw you need. He throws out routes from the opposite hash, can push the ball downfield, and can squeeze the ball into most windows.

A couple times, Taylor Heinicke was fooled by coverage rotations in the secondary. Pre-snap, the Buccaneers are showing Cover 3 with one deep safety. At the snap of the ball, the corner to the field rotates back to the deep half. Heinicke does see that player vacating, but thinks that he can throw a fade down the sideline. However, that corner is keying on #2, which keeps him pretty tight to the sideline and there’s really no scenario in which this is the type of ball that Heinicke should throw. The receiver is reading the coverage rotation and understands where the soft spot in the zone will be for the back-shoulder. Heinicke, however, treats it as a pure go ball and puts air underneath it. That allows the corner to easily get to the ball and the throw should result in an interception.

There’s a lot to like with Taylor Heinicke and there’s a little to be nervous about. He’s a gunslinger. There are going to be times when he tries to bite off more than he can chew, be fooled by coverages, or get out of position to make the throw. But there are also times when he extends drives with his feet, escapes from would-be sacks, and makes some absurd throws on the move at awkward angles. Is he a franchise-changing quarterback? No. But, he is good enough to win with guys around him and that’s exactly what he’s doing. When he’s on a hot streak, Washington is no easy out and they may find themselves sneaking into the playoffs for the second year in a row.