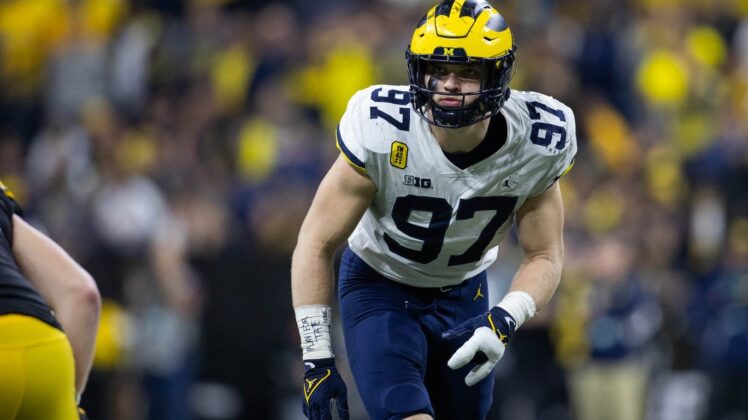 There’s been no better player in college football in 2021 than Aidan Hutchinson. That’s right, not the Heisman winner Bryce Young nor any other player was as good as Hutchinson. Finishing second in Heisman voting is a heck of an accomplishment for a defender, but he really should have won. Due to his incredible season, Hutchinson has shot up draft boards and went from a borderline first-rounder to a possible first overall pick. Michigan fans won’t like the comparison, but Hutchinson plays exactly like the Bosa brothers. It’s scary how similar the three of them are. Like those brothers, Hutchinson should go in the top three in this April’s draft. Unlike them though, Hutchinson just might end up hearing his name called first.

While Hutchinson is built like a Greek God at 6’6″ and 275 pounds, he is still smaller than every tackle he faces. Despite that, he is able to bully these larger players and throw them around like rag dolls. How does that happen? Hutchinson’s lower body is exceptionally strong and he uses his leverage to get underneath the pad level of offensive linemen. From day one as a football player, you’ll always hear that “the low man wins”. When you pair the pad level and the strength that Hutchinson has, you will see him regularly bull rush his way right into the lap of the quarterback. 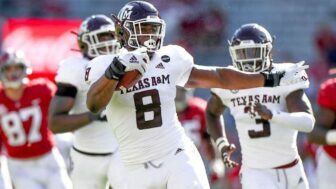 Some players will win at the college level based on talent alone. While you have to be very talented to play at the division one level, sometimes the gap between the good and the average players is staggering. What makes Hutchinson so good isn’t his refinement or strength, it’s that he will never take a play off. This kind of behavior is infectious. When the other ten guys on the field see the star going 100% every single play, they will be inspired to match that level of hustle. This may seem like a non-factor, but it’s a quality you want in a foundational piece in both college and the pros. 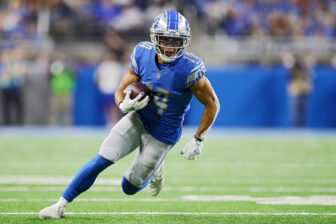 This is where Hutchinson really plays like a Bosa. He is able to use his hands to get offensive linemen off of him with ease. Not many college players are this developed and aren’t this refined this early. Hutchinson’s learning curve as a rookie won’t be as steep as most young players and he could contend for a Pro Bowl berth as a rookie.

While he might not have the quickness of some speed rushers, it doesn’t mean that Hutchinson doesn’t explode off of the line. If you leave him unblocked, he will be in the backfield before you can even hand the ball off.

Like I said earlier, while Hutchinson is quick, he’s not a guy who’s going to win on athleticism alone. When he used pure speed rushes, tackles were able to easily stay in front of him and continued to push him out wide, allowing the quarterback a clean pocket to step up into. Since Hutchinson can dominate in so many other ways, this isn’t a concern for me. However, he will either need to improve on this move or just cut it altogether. Knowing Hutchinson, he’s going to continue to get better and won’t be satisfied until his game is complete.

14 of Hutchinson’s 18.5 career sacks have come this year, his senior season. Of course, his junior year in 2020 was ruined because of Covid and other injuries, but you can’t help but wonder about having real success in only one season. We said this same thing about Joe Burrow. I have no questions about his ability, but it does make you think.

I wasn’t a believer in Aidan Hutchinson coming into the season, but man has he turned me into one. People had hyped up the Michigan pass rusher the last two years, but I didn’t see him as a first-rounder. In 2021 though, he has completely taken his game to a whole new level and looks like he has figured it out. He is very much in the discussion for the number one overall pick and at the very worst should go in the top-five. He and Thibodeaux will battle it out for the top prospect on my board, which is something I would have never guessed a few months ago. If you’re looking for an immediate contributor and defensive cornerstone for the next decade, you can feel very safe by drafting Hutchinson.