Joe Burrow is forcing himself into the MVP conversation

Joe Burrow might have +3500 odds, but his stats aren’t all that dissimilar from that of Aaron Rodgers (+125) or Tom Brady (+175). Burrow has a steep hill to climb, but he does have one big thing on his side: the story of bringing the Bengals out of mediocrity.

The Bengals are currently 9-6 and sit atop of the AFC North. The last time the Bengals won the division and made the playoffs was in 2015. While Burrow struggled with turnovers early in the season, in his last three games he has thrown for seven touchdowns, 1,030 yards, and zero interceptions. Those are eye-popping numbers. Adding two wins against the high-octane Kansas City Chiefs and the playoff hopeful Cleveland Browns could cap off a stroybook season. It would also put Joe Burrow directly in the middle of MVP discussions. 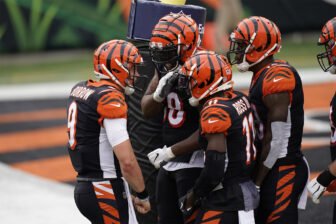 After taking apart the Baltimore Ravens for the second time this season, the Bengals have strung together consecutive wins and sit in the AFC North drivers seat. Ja’Marr Chase is getting back into form and Tee Higgins is starting to become a big-play weapon in the offense. Cincinnati has a team that is flashy enough to get eyes on Joe Burrow, who now has better MVP odds than Matthew Stafford. Throw in a quick recovery from his ACL injury last season, and you’ve got the makings of a streaking quarterback with a great story. If Burrow can toss out games that are even 70% as good as his showing against Baltimore, he could steal away an MVP in just his second year in the NFL.

Burrow has shown signs of stardom this year. He’s starting to trust Tee Higgins on 50/50 balls and when Ja’Marr Chase and Joe Mixon are humming, the offense is tough to stop. Burrow has the tools, the stats, and could get two more signature wins to put an exclamation point onto his MVP resume.