The Bengals and their offense are real contenders

Who are the Cincinnati Bengals? They’ve blown out AFC contenders like the Steelers and Raiders, played through overtime with the Packers, and Ja’Marr Chase was setting the world on fire. Then they lost to the Jets, put up a clunker against Cleveland, and Chase has fallen off the map with only 152 yards in his last four games. The offensive line has been good in spots, but not great. Joe Mixon has come alive in the last couple weeks, and they’re starting to figure things out on offense with the quick passing game, running to the strength of their offensive line, and layering plays to build off each other.

Zac Taylor, who cut his teeth with Joe Philbin in Miami and then Sean McVay in Los Angeles, is starting to use more outside zone in the offense. Taylor doesn’t run a McVay offense, though. He’ll use motion and some cool wrinkles and they’ve started to lean more on outside zone of late, but they also use a lot duo and don’t base through the run or tie in a lot of boot action and rollout passing.

The offensive line was a topic of contention going into the season – especially with the drafting of Ja’Marr Chase. While the line has evened out and is starting to get more recognition and consistency, there are still some very specific issues that they have. Their center, Trey Hopkins, and their right guard, Hakeem Adeniji, have a particularly hard time dealing with stunts and spikes from the defensive line.

When running outside zone, it’s critical for the offensive linemen to stay on their tracks and take good aiming points. That helps account for any slants or spikes from the defensive line. If you’re on your track, it doesn’t matter who appears, because you’re in the right spot to pick them up. Against this 3-technique, the center needs to take an angle that will allow him to overtake. That means he should aim the screws of his helmet at the screws of the helmet of the defensive tackle. He must stay on that track for three steps. If that defensive tackle doesn’t spike, he climbs up to the linebacker. If that defensive tackle does spike, then he’s taking the right track to be able to immediately pick him up.

On the snap, you can quickly see that his aiming point is on the back shoulder of the 3-technique. That puts him in a bad spot to be able to overtake or handle that player spiking inside. His angle is way too vertical and he only gets the back of the defensive tackle. Ideally in this situation, as soon as the guard sees the defensive tackle spike, he leaves that player and stays on his track. As soon as he turns his hips with the spike, that immediately allows play-side run through from the linebacker. If the center takes the right track, the right guard is free to climb to the second level.

Whatever the run scheme, that problem consistently popped up for the right guard and center when working against 3-techniques crashing down into the A-gap. Hopkins has had some real tough times on double teams and combos as well. It’s much better than earlier in the year, but it’s still not great.

Right tackle Riley Reiff has also had some bumps in the road – especially against the Raiders. Maxx Crosby took his lunch multiple times through the game. He’s otherwise been relatively solid, but the right side of the line is the clear weak point. For a veteran guy, he’s been lost in pass protection a couple times and has been incredibly slow out of his stance.

So, what have the Bengals done to combat this? Well, they’ve run left and they’ve run outside. Cincinnati has started to gel on the left side of the line and they’ve been really effective running pin and pull schemes to force flow from the defense and hide some of the interior issues.

The combo blocks on zone on the left side of the line have been miles better than the right. It’s at a 1-technique, but you can see the difference in the center’s angle, the left guard helping with a shoulder and keeping his eyes on the linebacker, as well as the overtake on the backside from Riley Reiff. It makes the entire scheme and play look different and more functional. The Bengals have really started to hit their groove with outside zone left in the past couple weeks against the Steelers and Raiders.

Even on spikes, this time from the 4-technique over the tackle, the left guard, Quinton Spain, does a great job. He stays on his track and attaches to the spiking player with the left tackle using a pushover technique to help out the tight end. The tackle then climbs to the linebacker.

The Bengals have also simply just said “F— it” and have run outside so they don’t have to deal with combos inside. The receiver cracks down and the ball is pitched outside onto the perimeter where Mixon is incredibly tough to deal with.

That covers some of what’s going on with the offensive line, so let’s transition into how Zac Taylor attacks the passing game. Despite having some great talent with Burrow, Chase, and Higgins. Burrow’s passing charts are dominated with underneath throws. 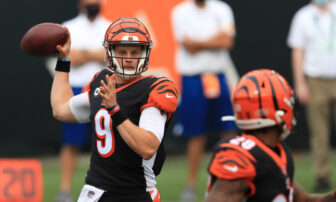 That’s not necessarily bad, because the quick game for the Bengals is what they generally do best. They run a ton of the Dragon concept and like to isolate the boundary side receiver because it isolates one defender, creates a pseudo one-on-one outside, and lets Burrow get the ball out fast.

Dragon is one of the most basic quick game concepts there is. All it is is a slant route and a flat route. If the flat defender flies to the flats, the slant window is open. If they stay passive under the slant window, there’s space outside on the flat. It’s their money play and they hit whenever they need a spark or a conversion.

Cincinnati especially loves to isolate Ja’Marr Chase as the single receiver and let him get the ball in space. It’s almost free yards for Burrow and the offense. It is incredibly hard to stop when you have a dynamic guy outside.

The Bengals have talented receivers and getting the ball into their hands is critical for their success. Almost every one of them is dangerous as a yard after catch guy. The running backs are also heavily involved in the pass game which operates as an extension of the run with some West Coast and possession football vibes.

The problem that the Bengals are starting to get into is that they are very formationally predictable. In the games I charted, when Cincinnati ran true spread formations like Trips and Twins, they threw the ball 85% of the time and the 15% of the time they ran the ball, it was a draw play. Additionally, whenever they had two players in a split backfield, they threw 100% of the time. Now, you still have to defend the pass and the concepts vary, but it’s an easy tell for defenses.

In the case of the Ravens game, whenever the Bengals came out in spread formations or a split backfield, Baltimore would typically bring pressure and either bracket or run man coverage behind it. More often than not, the Bengals couldn’t win on an individual basis outside. They won the game, but those formational packages were not very successful.

It’s not going to tip things to allow DBs to jump routes or know what concepts they’re running, but it does let coordinators and defenses make easy checks. They can get into specific pressure or coverage looks that they like because they know a pass is coming.

The offense is at its best when the deep ball is unlocked. We saw that early in the year with Ja’Marr Chase, but that deep ball has disappeared a little in recent weeks. The main issue, is that Burrow just doesn’t really trust anyone other than Chase to go win a ball. That might be changing with Higgins, but almost all of Burrow’s deep shots target Chase. To their credit, they did work out a lot, but teams have started to bracket Chase, which takes away his deep ball opportunities. In turn, Burrow throws a lot more underneath. Chase got a lot of anticipation throws from Burrow and that timing and trust hasn’t quite been there with other receivers until the last couple weeks. If someone else, like Tee Higgins, gains the trust of Burrow, that would be a huge boost to an already ascending offense.

The Bengals are getting better as the season goes on. They’re not perfect and there’s still some issue both with personnel and with play calling, but Zac Taylor has made efforts to fix some of the problems that popped up. The pieces are starting to assemble in Cincinnati and regardless of whether they figure it out for a big run this year, the foundation is strong with Mixon, Burrow, Chase, and at least a functional offensive line to keep those guys clean. The Bengals are exciting for the first time in awhile and with a couple more pieces and tweaks, they could be back for good.