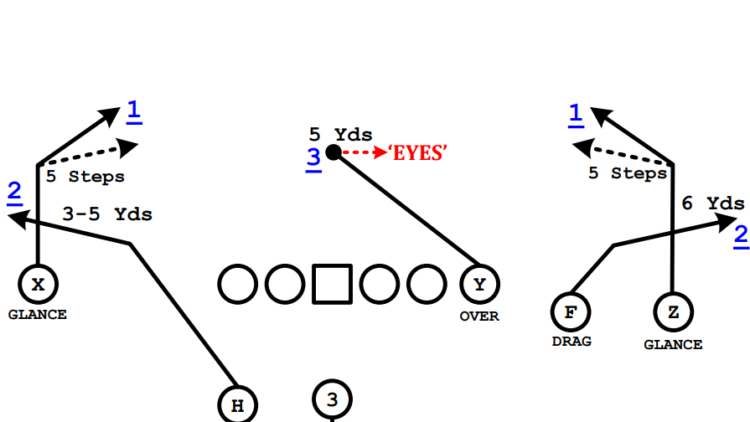 The Dragon concept is one of the more basic passing concepts in football. It’s used at all levels and is a great Cover 3 play that attacks the flat defender and lets the quarterback read off of their movement.

Dragon is a quick hitting play and is a quick game staple for almost every football team. It can be run out of a variety of formations, but the concept is created by two routes:

However you get to that combination, the concept remains the same. A lot of teams will use the running back out of the backfield to get to the flats, use a tight end to create better spacing, or motion into the flat route to get leverage on the defense.

Dragon is a Cover 3 or man coverage concept that attacks the flat defender. It’s a bad call against Cover 2 because there’s a corner waiting in the flats for the flat route and the Cover 2 safety can come down hard on the slant. That’s why Dragon is usually paired with another concept on the opposite side of the field so that if the offense does get Cover 2, they can work a concept that attacks that coverage away from the Dragon concept.

In Cover 3, the flat defender is the read for the quarterback. The read is:

Washington is running the Dragon concept with the running back and receiver to the boundary at the top of the screen. Tampa Bay is in Cover 3. The defender that the quarterback has to locate is the outside linebacker responsible for the flats.

As soon as that defender runs with the flat route, there’s a window behind to the slant.

Against man coverage, the read is essentially the same. Now, though, the quarterback needs to identify who is in man coverage on the running back. If they flow and vacate the slant window, that’s where the ball needs to go provided the receiver wins on his route.

Conversely, if the Cover 3 or outside defender runs in with the slant, that vacates space outside for an easy throw to the flats. Washington catches the Giants in a blitz and the quarterback sees the outside corner come in on the slant. That means nobody is left to cover the running back in the flats.

Dragon is a simple addition to quick game playbooks and gives the quarterback clean reads to attack man and Cover 3. It can offer the opportunity to get your players the ball while on the move, neutralizes blitzes, and keeps the offense on schedule in the short passing game.