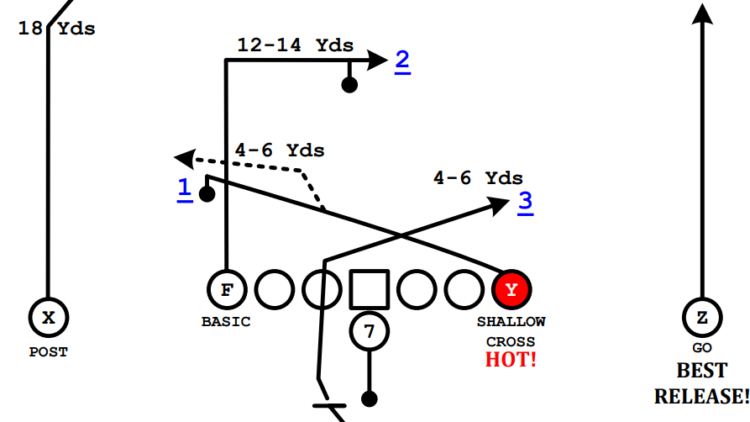 The Mills concept creates two high-low reads to put the deep safeties and linebackers in conflict. Whether it’s run at two safeties or one, it works to tempt players up to open space behind them.

The Mills concept consists of two primary routes and is usually run with a third supplementary route underneath. As long as these two routes are run next to each other, it’s considered the Mills concept:

To supplement that combination, a shallow drag is usually run by a receiver on the opposite side of the formation.

The dig is designed to tempt the play-side safety to come up. That vacates the middle of the field behind them for the post. A lot of teams use it to attack quarters coverage or two-high looks, but Mills is effective against single safety looks as well. To work against those one-high looks, though, you need someone with a little more speed on the dig to be able to get in front of the middle of the field more quickly and pull the safety up.

A lot of teams like this play against Cover 4 because it can force the play-side safety to come up on the dig. That leaves the corner with outside leverage and the opposite safety too far away to make a play.

That’s exactly what happens to the Packers here. Matt Ryan is reading the play-side safety to the top of the screen. As soon as he comes down on the dig, the post is open over the top for a touchdown.

Read More: Anatomy of a Play: The Packers 3rd and Goal vs. the Bucs

The Titans also hit the deep post on Mills here to set up a game-winning field goal vs. a Cover 4 look.

Conversely, when the safety stays on top of the post in the middle of the field, that opens up the dig underneath if the linebackers are pulled up on play-action or by the shallow drag.

The quarterback has a couple things he needs to do on this play:

When linebackers get depth and carry the dig upfield to help take away that window, that vacates the underneath area for the drag coming across the field. If there’s green grass in front him, the receiver will continue to run across the field. If it’s zone, he’ll settle in the soft spot on the opposite side of the formation. The Raiders get depth under the dig and the pressure gets home before Rivers has a chance to load up for the post. That forces the ball to go underneath to the drag.

The Mills concept is versatile in its ability to attack deep safeties and underneath defenders. Depending on the philosophy of the offense and how teams treat the post, it can be a high percentage play underneath with a great opportunity for a huge gain over the top.