What Changed with Mitchell Trubisky to Get the Bears Offense Clicking 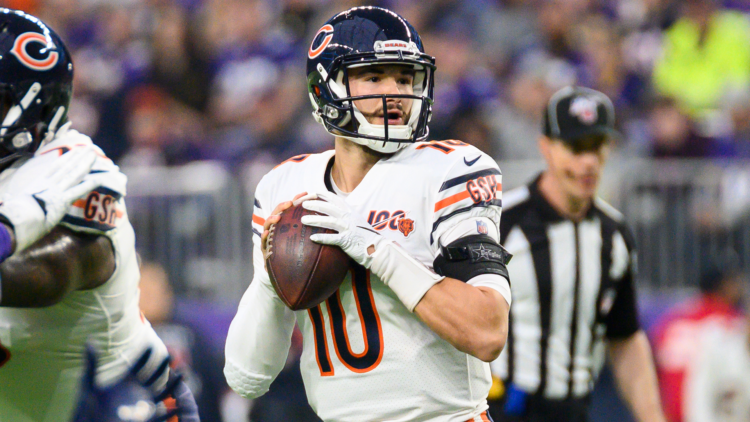 Mitchell Trubisky may be in the midst of saving his career and simultaneously saving the Bears’ season. In his last four games, he’s completed 72% of his passes, has seven touchdowns to two interceptions, and the Bears offense is scoring 35 points per game. In comparison, they were scoring just 16.7 points per game when Foles was starting. Bears fans might be conflicted after watching these ups and downs through Trubisky’s career but Chicago seems to have found a formula for success with Trubisky.

Use of Play Action

In the last four weeks the Bears have run play-action at a much higher rate than they had previously with Mitchell Trubisky. In weeks one through three and his first week back in week 12 against the Packers, they ran play-action just 25.8% of the time. Since then, they’ve been running it 41% percent of the time.

This adjustment from Matt Nagy has completely transformed the Bears offense. David Montgomery is now averaging 5.1 yards per carry, they can scheme Allen Robinson to be at whatever level and matchup they want, and most importantly of all, it simplifies everything for Trubisky.

The most common play off of play-action is the Sail or Food concept. It can work against any coverage, forces defenses to play disciplined in their zones and overloads one side of the field. Even more, it has drastically reduces the amount of pressure Mitchell Trubisky is facing. It gets him out on the edge of the defense, and allows him to be athletic and use his legs.

While the concept is simple and the throws are usually short, that doesn’t mean that they are easy. Trubisky has made a number of nice throws with pressure in his face and has allowed his receivers to run after the catch. Here the Bears are running that Sail concept. You have one player in the flats, an over route at the intermediate level, and a nod corner deep. The Texans are in man coverage and blitzing their slot corner to the bottom of the screen. That means that the corner with the flat route is going to have to navigate across the field in man coverage. As soon as Trubisky comes out of the play-action fake and feels pressure, he knows he needs to get it to the flat. He makes an off-platform throw that requires touch and allows the receiver to run after the catch.

The Bears run this concept to death. Here’s that same play against the Vikings. They have a receiver coming across the formation on the flat route, Allen Robinson running the over, and a corner from the top of the screen. All this play is for Trubisky is checking the flat defender. You’re almost never going to throw that deep route unless it’s wide open. That makes it a high low read on the flat defender. That defender has to choose between the flat route and the over. Here the flat defender comes down on the short route, and the over to Allen Robinson is open. These reads let Trubisky play much faster and decisively. He has much more consistent throwing mechanics and reads when he’s on the move compared to when he has to sit back and diagnose a coverage.

As a way to manufacture some deep shots, they’ll work double moves onto the Sail concept. Here, Jimmy Graham is faking like he’s running the intermediate route at 10 yards but turns it into an out and up. It again simplifies the read for Trubisky since he knows the goal of the play is to hit that double move. He just has to check to make sure the corner doesn’t stay over the top of it and give his big tight end a ball that he can go high point.

With these play-action Sail concepts, it really doesn’t matter what the coverage is. Of course it helps to know and diagnose who the flat defender is, but all he has to locate is whether someone can get underneath that intermediate route. If they can, he dumps it off to the flats. If they can’t, he throws the intermediate route. It’s all about simplicity and letting Mitchell Trubisky play fast.

In that vein, the Bears have also been working more RPOs with Trubisky. It’s again just reading just one defender and throwing off his movement. They’re cheap yards and hold the defense accountable. Trubisky has quick enough feet to make them work well. Here he’s reading the middle linebacker. If the linebacker comes up to fill on the run, Trubisky will throw the slant behind him. With the slot corner so far off and the linebacker coming up, it makes it an easy completion.

The Bears really like that RPO when they’re seeing coverage that’s way off from the slot corner. It’s a very simple and safe read and gets the ball into Allen Robinson’s hands.

Here the Bears are working the bubble RPO. As soon as that slot corner feeds into the run, Trubisky throws the bubble outside. The Bears do have some speed and playmakers and they’ve found ways to get them the ball in space. Trubisky’s intended air yards are down from earlier in the year and that’s a product of these simple concepts that get the ball out quickly underneath.

Comparatively, Mitchell Trubisky is much more prone to mistakes when he has to drop back and throw. Instead of cutting the field in half and locating one defender, he has to read and diagnose defenses. He can often lose track of hook defenders because he’s processing more and throwing late.

He can also struggle to read leverage on deeper routes. He’ll underthrow the ball when his receiver has his defender beat deep and will throw deep when the corner is stacked on top of the receiver which should indicate a back-shoulder throw.

Again, simplicity is the name of the game for Trubisky. His legs have helped get things going and the Bears have run a number of zone reads with him. The Bears might only use it a couple times a game but all this play-action, RPO, and zone read is helping the run game immensely which takes even more pressure off of Trubisky.

All Trubisky has to do here is yet again read one defender. If they crash inside to the run, he pulls it and runs outside. With their H-back crunching across and arcing to the free linebacker, Chicago is getting an extra blocker to that side. As that end goes in, Trubisky pulls the ball and gets a nice gain.

Montgomery isn’t the fastest back in the league but he is very good in small areas and the false steps that the zone read, RPOs, and play-action boot fakes have is super impactful for his game. You can see here how multiple Vikings are pulled out of position on the zone read fake by Mitchell Trubisky. These simple reads and the faster play is adding up for the Bears offense.

Trubisky isn’t magically fixed and an elite quarterback but the Bears have found what he does well and he’s making the throws he needs to make. Chicago seems to have finally discovered a formula. Run play-action, simplify things for Trubisky, and find ways to hold defenders in the run game by using zone read and RPOs. It’s working right now and it allows Chicago to sustain drives and let their elite defense go to work. They control their own destiny next week versus the Packers. If they win, they’re in and once you make it to the dance, anything can happen.