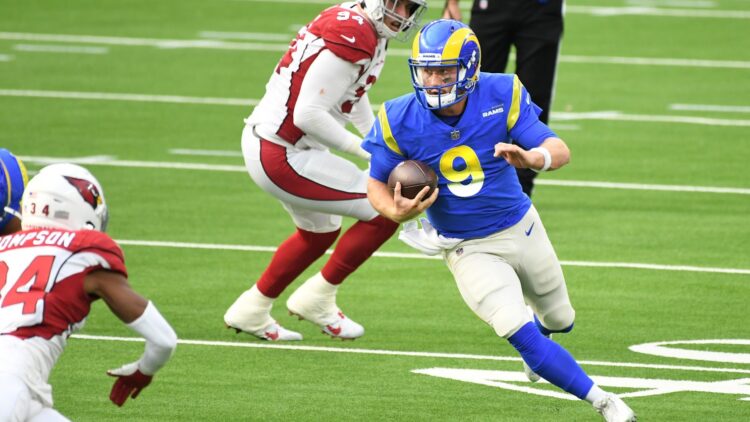 John Wolford might not have set the world on fire but he got the job done for the Rams. Los Angeles’ win on Sunday secured the 6th seed and a rematch with the Seattle Seahawks. With Cam Akers averaging 1.6 yards on 21 carries, Sean McVay found ways to use Wolford in the run game and simplify his reads in the pass game. While the Rams offense only accounted for three field goals, they won the time of possession battle 37:53 to 22:07. McVay called common concepts and empty formations to help simplify and accelerate Wolford’s decision-making. The Rams defense might have won the day, but John Wolford and the offense sustained drives and put the Rams in field goal position to add to the safety and touchdown scored by the defense.

To keep defenses in more vanilla looks, the Rams turned to empty formations with Wolford at quarterback. The Cardinals dared the Rams to go deep and throw the ball on them with a lot of one-high safety looks. Arizona was not going to let LA run the ball on them. It was up to Wolford to be able to diagnose coverages and make them pay.

Below, the Cardinals are trying to bait John Wolford into throwing a slant at the top of the screen. They’re dropping one of their defensive tackles into coverage right into the slant window. Through the game though, Wolford consistently read the two-receiver side when the Rams came out in empty formations. There’s less disguising and exotic looks to that side and it simplifies his read. To the bottom of the screen with the two receivers, it’s easier to diagnose what’s going on. The Cardinals are showing Cover 3 with the corner’s hips pointed inwards in a zone turn and a flat defender underneath. Wolford reads that the corner is flat footed and looking to jump the five yard out. As soon as he sees the corner sitting on the underneath route, he throws the fade outside before the safety can get over to help.

To help Wolford even further, the Rams and McVay ran a double slant concept multiple times through the game. It’s an easy defender key read that gets the ball out of the quarterback’s hands quickly. Wolford is reading the linebacker over the inside receiver. If that defender carries the slant inside, that opens up a window to the outside slant. If the defender were to drop under the outside slant to help bracket, Wolford would throw inside.

The Rams run game struggled throughout the game. Malcolm Brown and Cam Akers accounted for 54 yards on 24 carries. Wolford himself was able to account for 56 yards through scrambles and designed runs. His mobility was a big help in extending drives throughout the game. To stop the Cardinals from flowing too aggressively to the Rams zone run game, McVay had Wolford read the end man on the line of scrimmage in a zone read scheme. If that end man on the line of scrimmage crashes down to the inside, Wolford would pull the ball and run outside of him. The Rams arc released or crunched an H-back across the formation to help seal the outside in the event that Wolford kept the ball.

The Rams also called pure QB runs with a sweep to the outside off a jet sweep fake and a quarterback power draw out of an empty formation. There were no reads in these and they were both effective for nice gains on the ground. When you have a young quarterback who’s athletic and inexperienced, you find a way to help him be productive and move the offense. That’s exactly what McVay did with these designed runs.

John Wolford had a rough start with his first throw going for an interception, but he evened out nicely and showed great mobility to extend plays and move the offense. He wasn’t a world-beater but Sean McVay found ways to get him easy completions.

The Rams defense is elite and sometimes you just need to sustain drives and put field goals on the board and they’ll win the game for you. If Goff isn’t ready to go for the wildcard game against the Seahawks, Wolford will have to find ways to make them pay with his arm. There were too many accuracy issues that left big plays on the field to feel confident in him being able to put a team on his back, but for now, he did just enough. When the Rams defense comes to play, they’ll always be in the game.