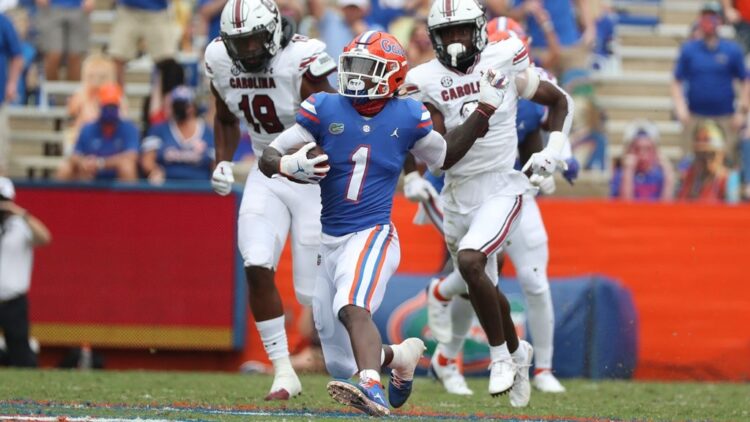 While Kyle Trask and Kyle Pitts stole the headlines for the high-powered Florida offense, Kadarius Toney was the firecracker that made the offense so dynamic. While originally started his career as a running back, Toney hit his stride at receiver in 2020. Florida found unique ways to get the ball in his hands and let him make plays. He might not be the most polished player, but he adds versatility to offenses.

Toney is a shifty and quick athlete. A former high school track star, Toney’s acceleration and quickness is what he uses to get open. He’s particularly dangerous in the slot working over the middle with slants and whip routes. Toney will be the most dangerous in spread offenses that allow him to work one-on-one.

Since Toney didn’t play full-time at receiver until recently, he can be used in a variety of ways. He could see snaps as a running back or run a lot of jet sweeps to keep the defense on their heels. Toney compares favorably to Percy Harvin or Deebo Samuel in the sense that they are more offensive weapons than they are wide receivers. Ultimately, you just have to find ways to get him the ball any way you can.

When you combine speed and toughness, it typically results in good productivity. Toney is special when the ball is in his hands and it’s mostly because of his contact balance. Defenders will think they have him down, but he keeps his legs churning. In Florida’s offense, Toney caught a lot of screens, which is something he should continue to do in the NFL.

In his first three years, Toney was responsible for 606 receiving yards. In 2020, he 984 yards. It could be a lack of a reliable presence at quarterback that limited his production, but it makes you wonder. Florida’s offense was stacked this past year and was able to let Toney get favorable matchups. The key is to be patient with him and let him continue to develop.

Since he was used a lot in motion or in the slot, Toney rarely saw press coverage. However, when he did or when a cornerback was able to get their hands on him at the top of his route, he wasn’t nearly as successful. With more reps at the position, Toney should get better.

Hands Could Be Better

It’s not that he can’t catch, it’s just sometimes he has shaky hands. He didn’t have too many drops, but he never flashed the ability to make contested or tough catches. Granted, when you got as open as he did this past season, it’s not really a problem.

Toney may never become a WR1, but he will become one of the most electric players in the league. He’s due for one huge play a game and the more you find ways to get him the ball, the most explosive your offense becomes. He’s rising quickly up draft boards and I think there’s a real chance he’s picked at the end of the first or the beginning of the second. Teams are looking for players that can open things up offensively and can be used at multiple positions. Expect to see Toney follow this trend and become an offensive coordinator’s best friend.