How to protect a struggling secondary

There are two schools of thought on how to protect struggling guys in the secondary. The first option is to play coverage and give them help over the top. The second option is to accelerate the timeline of the play and force the quarterback to get the ball out quickly. That can expose guys if they can’t hold up in man coverage. However, it also lets them play more aggressively since they know the ball needs to be out quickly.

Zimmer’s double A-gap look puts stress on protection plans for the offense. The goal of a defensive coordinator on blitz looks are to do one of four things:

Here, the Vikings get an offensive lineman on no one, which leaves one of their A-gap linebackers with a free run at the quarterback. Zimmer loves to show this look and bail out of it so that offenses struggle to determine who needs to be blocked. Carolina calls a three-man slide to the left side to protect against Kendricks and the two defensive linemen with their hands in the dirt.

That’s not a great protection plan for the Panthers, but it’s made even worse by Kendricks bailing out of the blitz and #50 Eric Wilson coming on the rush. The center slides left to take on Kendricks which leaves him blocking nobody. As a result, Wilson has a direct line to the quarterback. Bridgewater knows he has to get the ball out quickly, but so do the defensive backs of Minnesota. That allows both Dantzler and Gladney to play aggressively with Anthony Harris also over the top to help protect deep. The ball goes quickly outside and the Vikings rally to stop the Panthers and bring up 4th down.

The risk of blitzing

While that blitz look hit home a couple times, it also leaves the secondary on an island. When Zimmer blitzes both of those linebackers, that leaves the secondary in Cover 0 or Cover 1 behind it. Without true edge threats, teams would often be able to block things up well enough to get the ball off. That left the Minnesota defense susceptible to big plays.

In this look against the Lions, the Vikings bring Harrison Smith down to the line of scrimmage and send him on a blitz for seven total rushers. The Lions only have six in protection. Stafford understands that and Detroit has a rub route called outside which is perfect to exploit a man coverage defense. The Vikings aren’t able to get home and have spaced the blitz poorly so that the Lions’ left guard can wall off one of the defenders while still staying engaged with another. That gives Stafford time to get the ball off to his receiver down the field.

Those double A-gap looks burned the Vikings more than they got home. Getting pressure was still an issue even when Zimmer was able to scheme up free runners or mismatches. Rookie corners usually struggle early on and that was the case with Dantzler and Gladney. Both improved a lot as the season wore on, but that didn’t stop teams from exploiting the blitz looks. If the corners play off to give themselves cushion in man coverage, teams would hit them outside like Rodgers and the Packers did on this play. The Vikings are in man coverage with no safety and the linebackers dropping into slant windows. Since the corners are off, though, it gives an easy access throw on an out route to the top of the screen to Davante Adams.

The Vikings really struggled to get home and their sack total was cut in half from 2019. When you’re asking linebackers or defensive ends to drop and cover guys in man coverage, you’re bound to get burned. The Vikings had almost no option with the lack of production on the edge, though. 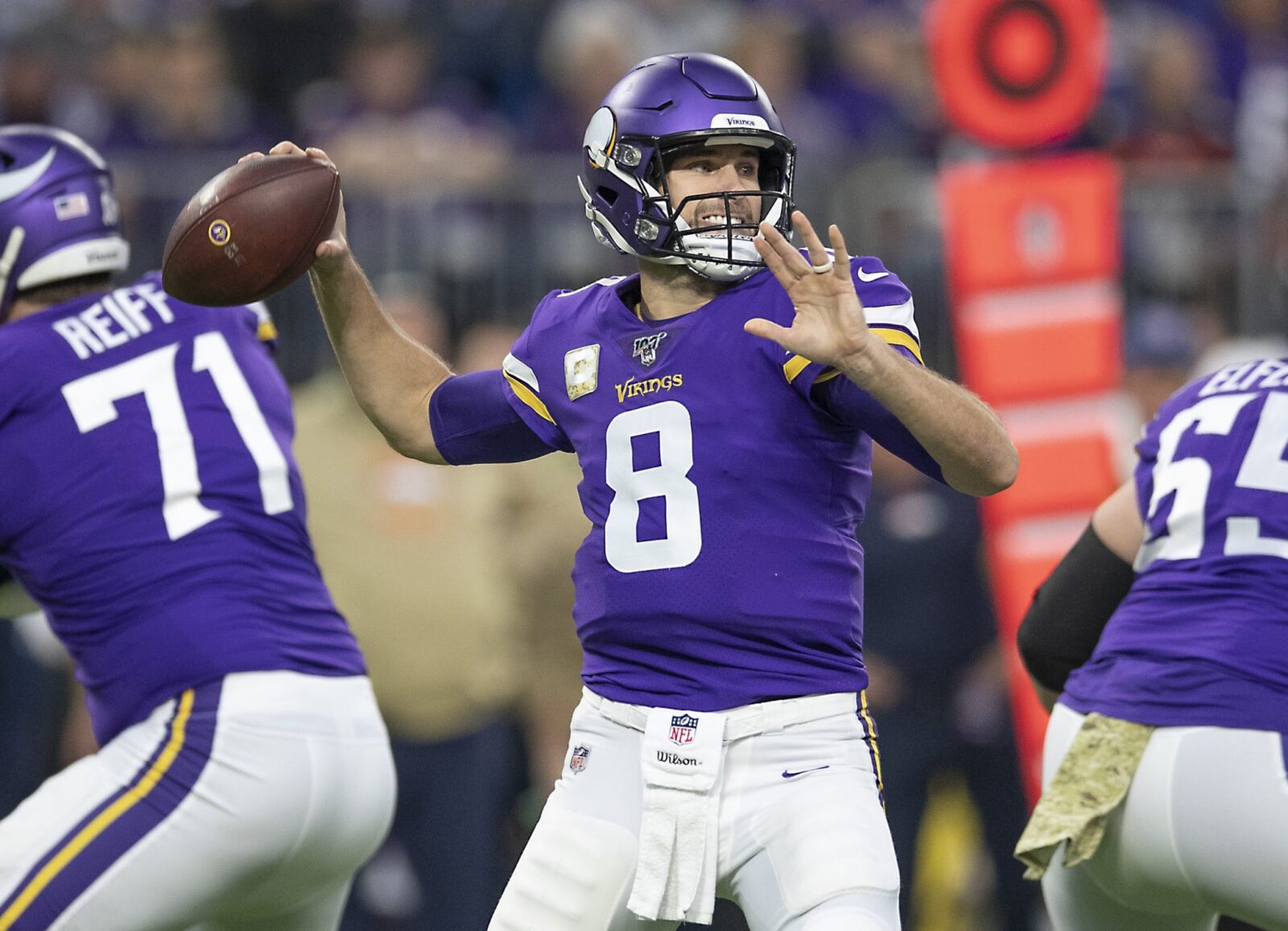 Also Read:
Is Kirk Cousins the answer for the Vikings?

Adjusting to the double B-gap blitz

Minnesota started to run some double B-gap looks later in the season when both Barr and Kendricks were out with injury. By widening those linebackers out to the B-gaps, that helps them to bail and get to their spot a little faster. The A-gap mug look can be really effective, but it takes good athletes at the linebacker position to get out and under the passing lanes as you bail out from it.

To combat the double B-gap look, the Buccaneers are doing a four man slide to the right. That leaves the left tackle isolated with the running back working a dual read in protection. Similar to the look against Carolina, Minnesota gets Tampa to devote one more guy than they need to in the slide protection. Zimmer is only bringing three guys for the Buccaneers four offensive linemen. That leaves the center with nobody to block.

This Zimmer blitz is for Shamar Stephen (#93). The Vikings widen the left tackle with an outside pass rush. The linebacker walked up in the B-gap has the responsibility of getting the running back to commit to picking him up and then moving the left guard off of the defensive tackle. With that move, he pulls two separate blockers and opens up a line for the defensive tackle to wrap around. Brady is Brady so he gets the ball out, but it creates enough pressure to force the incompletion.

Comparatively, when the Vikings bail from that double B-gap look, it’s much easier for the linebackers to get to their landmarks. The Vikings are running Cover 3 and the middle linebackers walked up in the gaps are passing off any seams. Without seam responsibility, that means they need to first wall off any crossers. As soon as the ball is snapped, you can see both linebackers look to the sideline to check for any in-breaking crossers coming towards them. If none come, they continue to sink and absorb anyone that enters into their zone. Both linebackers are quickly in position to prevent any hot route throws and the blitz look created two one-on-one situations to the left side of the line.

The scheme was there, but the production wasn’t. The Vikings had a team pressure rate of just 21.6% which was dead last in the NFL. In 2019, the blitz looks and A-gap walk-ups got home. The difference in success rates comes down to personnel. Having Danielle Hunter and Everson Griffin as well as a healthy linebacker duo makes a huge difference.

That same exact same double A-gap look against the Lions in 2019 gets home. You can scheme match-ups and linemen blocking nobody all you want, but without someone to win a one-on-one, it puts the secondary in an incredibly tough spot. The Lions give a full slide and are forced to leave their tight end on Danielle Hunter. The blitz from Zimmer again gets a lineman blocking nobody, the scheme works just as it did in 2020, but personnel is the difference.

The Vikings defense, while bad in 2020, should see massive improvement in 2021. The return of their blue-chip players and a year of work for the rookie corners will make a world of difference. The Vikings are a team that struggled to stay in the race for most of the year but that will jump back into competing for the NFC North title in 2021. They have talent on all three levels on both offense and defense and if those players get going in combination with what Zimmer is working with his blitzes on defense, the sky is the limit for the 2021 Minnesota Vikings.