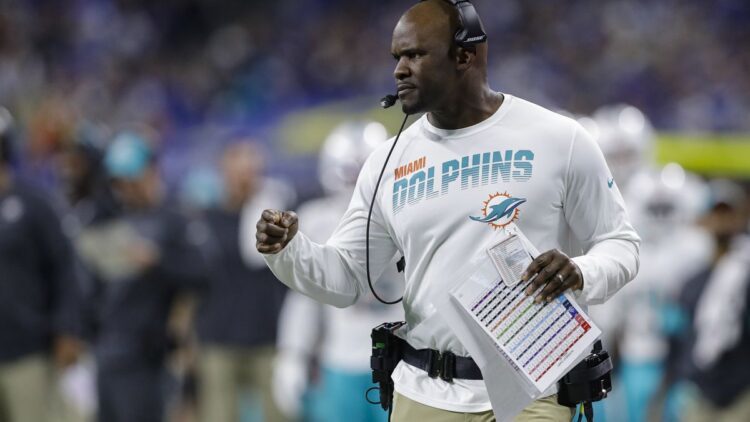 In 2019, the Miami Dolphins defense was dead last in the NFL by DVOA. In 2020, the Dolphins jumped to 11th overall and 6th in pass DVOA. They went from giving up 35 points per game to just 21. All this improvement was spurred by the fronts and pressure packages from Brian Flores and great secondary play from Xavien Howard and new addition Byron Jones. Miami had one of the highest blitz and pressure rates in the NFL with almost 10% of their blitzes coming from a Cover 0 look with no deep help. They also brought five or more rushers on over 1/3 of their defensive snaps. They weren’t without flaws – especially in the run game, but the defense came up big without the big names to back it up.

While they only ended up blitzing and being in a true Cover 0 about 10% of the time, that didn’t stop them from showing Cover 0 and bailing out of it. Cover 0 means there are zero deep defenders. Everyone is at the line of scrimmage and in man coverage.

The Dolphins are in one of those Cover 0 looks here. The secondary outside all are in man coverage. The Dolphins coach their guys to engage as much as possible with the offensive lineman before they bail to their coverage spots. This forces the offensive line and protection schemes to engage with them and open up lanes elsewhere. If they have free releases and aren’t picked up on that initial step forwards, they have the clear to continue their track and attack the quarterback.

There are eight potential rushers here for Miami and the 49ers have seven total guys to block. What San Francisco is trying to do is give a four-man slide to the left and leave their smaller personnel to block the smaller defensive backs on the right. The left guard over to the right tackle are sliding to pick up the four defenders to that side starting with the linebacker walked up over the center. That leaves the left tackle, running back, and tight end for the four other potential rushers. However, the Dolphins aren’t sending all of those four guys to the left. That means that the 49ers slid four linemen to block two defensive players. In turn, the other side now has three guys to block four. That leaves the linebacker walked up over the guard as a free runner. The right tackle can’t squeeze down enough to cut off the lane and it’s a free sack for the Dolphins. 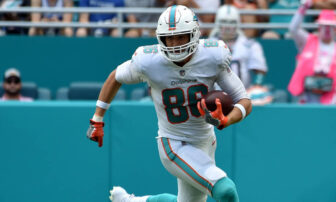 In the secondary behind those looks, Miami tries to bait quarterbacks into making mistakes. Sometimes they get burned, but what the Dolphins have their defensive backs do behind the Cover 0 looks is play off man coverage. That’s generally pretty normal, but they also play with their eyes in the backfield. Especially in empty, Miami loves to jump routes and spy the quarterback because they know their blitz is going to force the ball out quickly. When they know the quarterback has limited time, that frees them to be more aggressive and is a big reason why they were +9 in turnovers this year.

Flores did a great job of understanding how teams are going to try to block up their zero looks. With that, he can predict their protection plan enough that he can drop players into coverage and still get free runners. It’s a real cat and mouse game because quarterbacks and offenses also know when there is a potential for a free runner and will adapt to that.

The Cardinals understand that they’re giving a full line slide to the right to combat the pressure look from Miami. Because of that, Kyler Murray knows he’s going to have to drift and scramble to the direction of the slide because any backside defenders are going to be unblocked. However, Miami also knows that’s what Murray is likely to do. It’s a common adjustment. The defensive end to the direction of the slide plays hard up-field to try and force Murray up into the pocket. That also has the added benefit of closing his passing lane to the quick slant down below. The corner is reading the quick slant and is breaking on the route so even if Murray does get the ball off, he’s there to make the play. Murray can’t navigate the vertical pressure from the edge, and the Dolphins defense is able to force the ball out and scoop it up for the score. 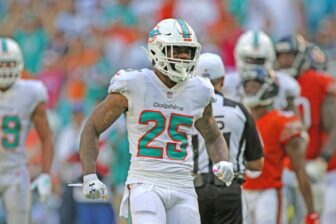 Also Read:
Miami’s Xavien Howard has All the Tools to be a Shutdown Corner

When they didn’t get a free rusher or couldn’t get home, though, the Dolphins got themselves into trouble. The zero look is not without risk. Miami did a great job of mitigating that as much as possible, but they still got burned on it through the season. Deep shots and quick screens gashed them a couple times, especially when they only brought four on the rush. This time, Arizona’s center does an awesome job of folding off of his protection duties down the middle and picking up the edge pressure when the Miami defender engages and then drops to their zone. Without that adjustment, this touchdown doesn’t happen. It’s a great shift in protection to beat these bail looks from Miami. That buys time for Murray to wait on the deep post and launch the ball deep for a score.

The Chiefs especially gashed them on quick screens whenever they got into those cover zero looks. They knew that the Dolphins loved to bring pressure against empty formations, so they’d immediately get the ball out on the perimeter to their speed guys and not even attempt to block the players walked up at the line of scrimmage. Instead, they chose to make those guys turn and chase to the sideline while they picked up free yards. Especially with defenders playing so far off, it gave easy access and space for the Chiefs’ receivers to damage after the catch.

Tite Front – The good and the bad

To get the full breakdown on the Tite front, view the video at the top of the page or visit our YouTube channel.

When not in those looks, the Dolphins liked to get into Tite fronts with a nose or shade and two inside technique players on the tackles. They also had outside linebackers up at the line of scrimmage to give a 5-man front. However, out of those fronts, they had some real trouble with their force defenders and alley players in the run game. Those problems really showed up against outside zone teams like the Rams and 49ers.

That Tite front had some great versatility and lead to a lot of positive plays, but containing teams inside was a recurring issue.

The Tite front wasn’t without merits though. The Dolphins threw in twists and stunts with their linebackers and made some nice impact plays.

The Dolphins are quickly becoming one of the most fun teams to watch in the NFL and Brian Flores’ defensive scheme has a lot to do with that. He’s not scared of dialing it up and he finds ways to get guys free without any premier edge rushers. Miami was on the cusp of the playoffs this last year and if the defense shows up like it did in 2020, the sky is the limit for the Dolphins.