In what is expected to be a very defense-focused 2022 NFL Draft, no prospect is as unique as Notre Dame’s Kyle Hamilton. Hamilton is listed as a safety, but lines up everywhere for the Fighting Irish. He and Jeremiah Owusu-Koramoah were the two stars of the 2020 Notre Dame defense that was one of the best in college football. With the rare combination of size, speed, and IQ, Hamilton figures to be a plug-and-play defender as a rookie. Hamilton’s versatility should make him a top-ten lock and he has the chance to be the rare safety drafted in the top-five. 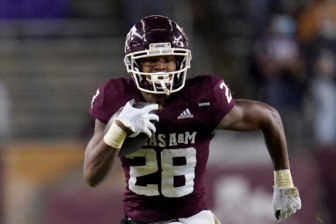 Human beings at Hamtilon’s size (6’4″ and 220 pounds) should not move as smoothly as he does. There are moments where it’s like he is shot out of a cannon when he comes up to make an aggressive play. When he takes a wrong step or misreads a play (more on this later), Hamilton’s short-area quickness and ability to change direction allows him to make up a lot of ground. Hamilton is able to flip his hips effortlessly, which is a great trait for a defensive back. In addition to his speed, Hamilton has the strength of a linebacker and plays physical with tight ends and wide receivers.

There’s nothing that Hamilton can’t do on the football field. You can play him in single-high, as a two-deep safety, in the slot, or as a linebacker and he will make plays for you. Calling him a safety doesn’t do him justice. In reality, he’s a defensive weapon who plays all over the field. In the NFL, we are likely to see Hamilton play his more natural position of strong safety in base packages, but move down and play in the box as a linebacker or bltizer in obvious passing situations. That is a luxury to have if you’re a defensive coordinator. We’ve seen this type of versatility in high draft picks like Isaiah Simmons and Jamal Adams. Hamilton should follow in their footsteps.

The stereotype for a strong safety is being able to come up and make big hits. While Hamilton is far from the stereotype, he does an excellent job of tackling. When he gets going downhill, he plays and hits like a linebacker but moves like a defensive back. There are times where he’ll be out of control and go for the knockout blow rather than a normal tackle, but normally, he’s a technically sound defender who’ll bring the ball carrier to the ground.

Can play out of control

While being aggressive is a great trait to have, it can get you into trouble when it starts turning into recklessness. Hamilton likes to play fast and make big plays, but on occasion it’ll put him out of position on a play fake or force him to miss a tackle. Too often Hamilton was totally out of position on play-action where he was looking to make a big hit when he instead should have been focused on his coverage down the field. You can live with these miscues if Hamilton continues to make an impact like he has been doing. However, if it happens over and over again and the big plays aren’t being made, then he becomes more of a detriment than an asset.

How do you use him?

“Everywhere” is the easy answer for this question, but as we’ve seen with the aforementioned Adams and Simmons, it’s not really that simple. There was a huge learning curve for Simmons as a rookie, though he did look better towards the end of the season. Adams just became a very rich man, but plays more linebacker than safety. You need a creative defensive coordinator that is going to allow Hamilton to play loose and free. A coordinator that sticks to their system is setting Hamilton up for failure.

There might be players with similar builds and skill sets to Hamilton, but none were as complete of a player as he is. Not only can he come up and be physical against the run, but he also has the athleticism and IQ to be a plus coverage guy. He’s in the running for being the top prospect in the 2022 draft and should be a top-ten lock. This year, I’d like to see him cause more turnovers and maybe even be used as a blitzer a bit more. A special player like him has to be used in unique and original ways. If that happens, I think we are looking at a multiple-time All-Pro selection.