Aaron Jones Might Be the Best Zone Runner in Football 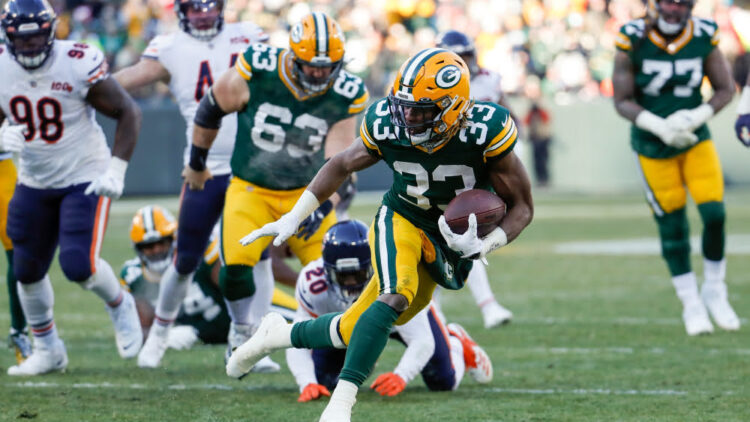 Green Bay Packers’ Aaron Jones runs for a touchdown during the second half of an NFL football game against the Chicago Bears Sunday, Dec. 15, 2019, in Green Bay, Wis. (AP Photo/Matt Ludtke)

With a 5.0 yard per carry career average, his first 1,000 yard rushing season, and 23 total touchdowns in 2019, Aaron Jones has officially arrived on the scene. A 5th round pick out of Texas-El Paso, Aaron Jones has been an absolute steal for the Green Bay Packers. Matt LaFleur’s offense is the perfect fit for Jones’ running style with his ability to read zone blocking, get vertical quickly, and squeeze through holes you can barely even see. While he won’t exactly run anyone over and isn’t the biggest back at 5’9” and 208 lbs, his ability to bounce off of direct contact and twist to fall forward allows him to play between the tackles and be a workhorse back. His ability to find yards where there aren’t any, manipulate linebackers by pressing the line, and his speed to get outside all combine to make him one of if not the best zone runner in football.

When you watch Aaron Jones run, he doesn’t cut — he bends. It might not look sudden and explosive but it allows him to maintain speed and hit creases without slowing down. Here the Packers are running split flow zone with Jimmy Graham, the wing coming across to kick out Nick Bosa #97. We’ve covered a lot of this split flow and outside zone blocking scheme in our posts on Josh Jacobs and Raheem Mostert. The general concept though is for the running back to press playside with the goal to get outside the defensive end and onto the perimeter. If the defense walls off the outside, as they do in the play below, the running back sequentially looks one gap inside until there is a crease that they can take. If you have aggressive linebackers and a patient running back, linebackers can over pursue and leave cutback lanes open on the backside of the play. Normally the backside defensive end is left unblocked so the split flow or crunch for the H back or wing attacks that player and prevents them from pursuing down the line. Teams will sometimes fake the split flow crunch and have the tight end or H back go out into a route off of play-action to really make the defensive end think.

This zone scheme gives the ability for running backs with good vision to exploit over-pursuit of the defense and allows for holes to open up even if a lineman gets beat quickly. You can see here even though the defensive tackle #95 immediately wins against the Packers’ guard, Aaron Jones is able to cut-back and has enough speed to get the edge and get around the linebackers that had already started to fill.

You can see the sequential reading Aaron Jones does play after play on outside zone. He is incredibly efficient and fluid going from gap to gap and being able to find yards even against superior fronts and defenses.

Combine his vision with his ability to bend instead of making hard stop and start cuts and he’s able to hit holes at full speed which maximizes his ability to take advantage of defenders that are out of position.

He doesn’t have to be flowing outside to be effective though. He won’t run anyone over but his size allows him to squeeze and wiggle through holes that not a lot of backs are able to. One of the most impressive things about him is that you can see how tight he gets to his blocks, often rubbing right off of them to avoid direct contact and squeeze out extra yards.

Ideally you’re not asking him to run people over but he is more than willing to take contact and if you don’t wrap Jones up, he has really good balance and an uncanny ability to fall forwards.

You’re also going to get plays like the one below though. If defenders get hands on him, it’s tough for him to break through despite his leg churn and balance.

Jones is the perfect back for a zone system and as LaFleur expands his offense in Green Bay, I’d only expect to see an even greater impact from Aaron Jones. Throw in that it is his 4th year and contract year with the Packers and he could be in store for a dominant 2020 campaign. His explosiveness through the hole, ability to squeeze through small spaces, understanding of how to set up linebackers, speed on the edge, and exceptional vision make him perhaps the best zone running back in the NFL.