NFL Fantasy Championship Week 16 Starts and Sits Of The Week 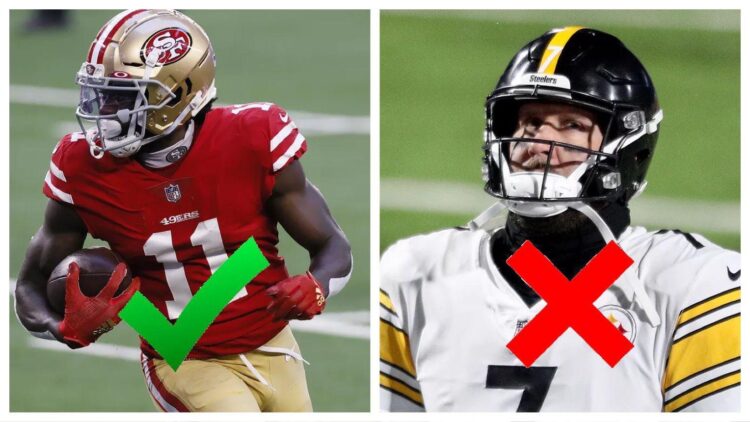 It is officially crunch time for fantasy football players. Your fantasy championship week has arrived for the majority of fantasy leagues and it’s time to set your final lineups of the 2020 NFL season. You most likely already have your must-starts and your must-sits. It’s really those players that you’re torn between starting and sitting, that will ultimately decide your fantasy championship matchup.

Whether you’re playing for a cash pot or bragging rights, are you ready to claim the ultimate prize?

Before your lineups are set for this weekend, let’s sort a few things out:

Tom Brady – With an oppurtunity to clinch a playoff spot, Ronald Jones unable to go, and a vulnerable Lions defense, Brady is expected to sling it early and often.

Jalen Hurts – Hurts has been extremely impressive since taking over as the starter. Wast week he had over 400 total yards, 4 TDs, andh no turnovers against a formidable Cardinals defense. With Hurts’ skillset, his Week 16 matchup against the Cowboys is a match made in heaven for Fantasy teams with title aspirations.

Justin Herbert – After having arguably his best performance of the year last week against Vegas in primetime, Herbert is matched up against a Broncos defense that just got torched by Josh Allen last Saturday. The first time playing Denver this year, Herbert was able to toss three scores. You can expect similar results this time around.

David Montgomery – This one was pretty obvious. Montgomery has been on an absolute tear in the past four weeks. He’s averaging 26.5 fantasy points over that span. With the Bears playing a poor Jaguars run defense, expect Montgomery to make the most of his touches.

Giovani Bernard – Bernard thrived in Week 15, acting as a workhorse against a stout Steelers defense. With Mixon ruled out once again, he looks to be the main option against the Texans, who have given up the 2nd most points to RBs this season. You can also expect him to see a lot more work in the passing game this week.

David Johnson – Johnson was able to reel in a staggering 11 receptions in Week 15 and shouldn’t see a similar workload in Week 16. Both of his backups are currently dealing with injuries. He is clearly the lead back and is arguably Deshaun Watson’s best receiving option. Johnson is a must-start for fantasy owners on their fantasy championship weekend.

Brandon Aiyuk – Since returning from injury in Week 13, Aiyuk is yet to score under 20 fantasy points in a contest. In Week 16, the Niners face a Cardinals defense that was gashed by Philly’s Jalen Hurts last week. While the Niners QB situation is currently questionable, Aiyuk should be able to maintain his normal level of production. Especially since San Francisco will be looking to throw a wrench into the works of Arizona’s playoff hopes.

Jarvis Landry – As the Browns fight for the top spot in the AFC North, they face a Jets team ranked 29th in pass defense according to DVOA. With that being the case, you can expect red-hot Baker Mayfield to air it out more than a few times in this contest. Landry has had at least 7 catches and a TD in three of his last four outings. As the top receiving option in Cleveland, there’s a good chance he provides owners with another solid week.

Robert Tonyan – Tonyan has scored a TD in each of his past five games and is currently a top three TE in all of fantasy. Matching up against an exploitable Titans defense in Week 16, Tonyan is as close to a must-start as it gets. Especially with Green Bay looking to clinch a first-round bye.

Noah Fant – After his performance last week against the Bills, it seems as though Broncos OC Pat Shurmur has figured out how to get the most out of Fant’s abilities. Paired with a favorable matchup against the Chargers, fantasy owners can feel comfortable starting Fant in Week 16.

Mike Gesicki – Gesicki’s status for Saturday’s game against the Raiders remains questionable, but if he’s able to suit up, he should be a lock for all lineups. He has put together two fantastic outings in his past two games, and matches up with a vulnerable Vegas defense. With Miami down to practice squad receiving options, he should see a heavy workload if he sees the field.

Ben Roethlisberger – Big Ben and the Steelers offense struggledd last week against Cincinnati and there’s no evidence that this week’s matchup against Indianapolis will be any different. Teams are starting to figure out how limited Roethlisberger is at this stage of his career. That’s not a good sign for fantasy owners with title aspirations.

Jared Goff – Obviously, a matchup against Seattle looks very attractive on paper, but don’t be fooled. The first time playing them this year, Goff was held scoreless. Los Angeles relied on the ground game often in the contest. With Seattle playing with No.1 seed aspirations, expect Seattle to put immense pressure on Goff in this one.

Cam Newton – Cam is a pretty obvious sit candidate this week. Newton has simply not been productive enough to trust in your fantasy lineups. He’s playing against a Buffalo defense that looked fantastic last week.

Chris Carson – The Rams have been a tough matchup for RBs all year and Carson is dealing with injuries in a stacked backfield. He’s become a must-start for many owners, but if you’re able to avoid starting him in your fantasy championships, do it.

Mike Davis – Matched up against the Football Team this week, it’s probably best to avoid Davis this week. He struggled to get much going in a Week 15 matchup against a vulnerable Green Bay squad.

Kenyan Drake – Drake is currently operating in a split backfield and having a tough matchup against the Niners for championship week doesn’t help. If you can avoid it, there’s almost no reason to trust Drake with a title on the line.

A.J. Brown – Facing one of the league’s best corners this week, Jaire Alexander, Brown is not in a position to be trusted on your fantasy championship week. Brown has been solid for most of the year, but a matchup against one of the best corners in the league is a risky one.

Terry McLaurin – McLaurin is carrying a Doubtful injury designation heading into this week. If he’s able to suit up, you should probably stay away anyways. Carolina was able to hold Aaron Rodgers in check for the majority of last week’s contest, so it’s hard to say Alex Smith will have much more success.

JuJu Smith-Schuster – Big Ben really struggled to get much going last week against an extremely exploitable Bengals defense. It’s best to stay away from any Steelers weapon against the Colts this week.

Eric Ebron – Ebron isn’t attractive this week in fantasy for the same reasons as his teammate, JuJu Smith-Schuster. Smart choice to look elsewhere.

Zach Ertz – Ertz does have an attractive matchup against the Cowboys this week, but Dallas Goedert’s involvement in the offense makes Ertz a pretty risky play in your fantasy championship game.

Hunter Henry – Henry is carrying an injury designation into Sunday’s contest and has a tough matchup against Denver which makes Henry an unattractive play this week.