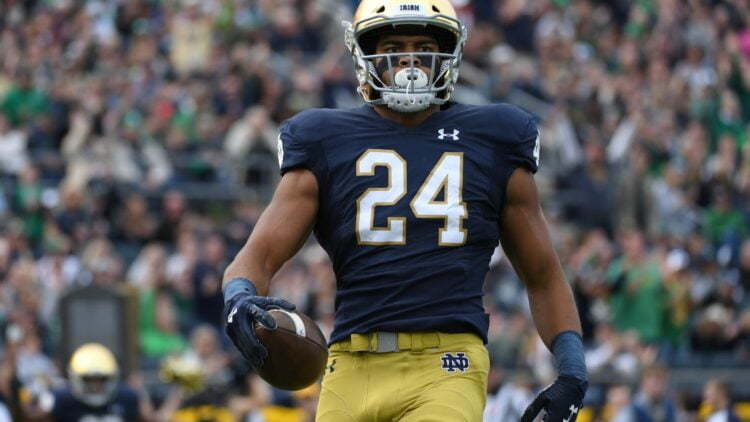 God, Country, Tight End U? Notre Dame football has developed some of the best players in the NFL and is amongst the nation’s elite programs. One reason for that is their recruiting and development of tight ends. Cole Kmet, Tyler Eifert, and Kyle Rudolph are just a few of the tight ends drafted early since Brian Kelly has taken over as head coach. The program has had seven tight ends drafted since 2010, the most of any school during that time frame. Tommy Tremble is much different than the others though. He is used more as a move tight end by going in motion or lining up as a full back. He might not be for every team, but Tremble should see a role on a creative offense that takes advantage of mismatches.

Tremble is elite at creating holes for his running back, regardless of if he was used in motion or on the line. He does an excellent job of staying low and keeping his hand placement in the proper area. Notre Dame did a fantastic job of letting him use his athleticism to get up to the second level, where he would bully smaller defenders.

While Tremble is listed as a tight end, don’t be shocked if his future is at H-back or fullback. He lined up several times as a traditional fullback and the results were typically good. If he were to play only tight end, he’d probably need to gain another 10-20 pounds to deal with the physicality of NFL linemen. However, at his current weight, he’s a little more dynamic and can used in a variety of ways.

Potential as a Receiver

His career receiving stats of 35 receptions for 401 yards don’t inspire much confidence, but Tremble’s athleticism does. He needs to work on his hands as there were too many drops, but his speed makes him a weapon after the catch. If you use him properly by targeting him early on plays, then he can be a great receiving option.

Tremble isn’t a true tight end, but also not a true H-Back. His role on an offense might take a season to blossom as he gets his feet wet in an NFL offense. Like I said earlier, he does both of them well, but either needs to gain weight or move to a new position. As a fullback aficionado, I want to see him be used in that role most often. Unfortunately, that’s a dying position. He will more than likely need to bulk up and exclusively play tight end, where he showed potential, but never put it all together.

This one may not be too much on Tremble since he ran a small route tree at Notre Dame. He ran a lot of short routes, crosses, and was never required to get open by himself. For being quick for his size, he didn’t show much wiggle or elusiveness on his routes.

While he might not be a fit in your favorite team’s offense, you can’t deny the potential that Tremble possesses. If you put him in a West Coast or Shanahan-style offense where can line up all across the field, there’s a real chance he ends up being the second-best tight end in this draft outside of Kyle Pitts. His athleticism makes him a mismatch nightmare and his blocking keeps him on the field regardless of the situation. There’s a real shot that Tremble could be a day two pick and should slip no further than the fourth round.