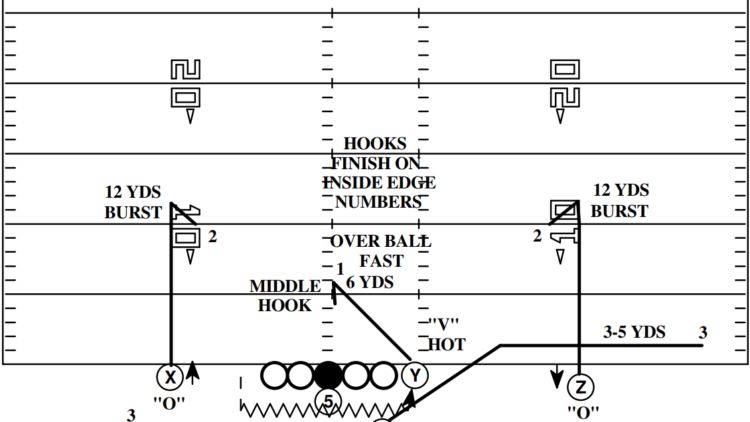 The Hank concept (Curl/Flat) is a West Coast staple and is used at all levels of football. It is best against Cover 3 and floods the underneath defenders.

Hank wants to exploit both the hook and flat defenders. The concept has the flexibility to throw to either side if defenses overload one side of the field.

The Hank concept consists of:

The curl and flat routes are usually mirrored on either side of the field with the #3 receiver or tight end running the sit route.

The way the defense aligns can determine if the quarterback should read to the three-receiver side or the two-receiver side. If the defense is balanced with two underneath defenders on either side of the center, the quarterback will read to the side of the attaching linebacker on the sit route. By doing that, the offense is guaranteed a numbers advantage. One defender is now left to guard both the curl and the flat route.

Against Cover 4, Hank isn’t a great concept. The safeties can rob the curls with nothing holding them deep and the flat defenders can widen to the short outs. Some teams will combat that by converting their sit route into a seam or post to hold that play-side safety. Others will run it as is and work to leverage the middle linebacker.

The sit route is often the first read on the concept. Some choose to treat it as the checkdown and read the concept outside-in, but especially against Cover 4, the sit route should work to leverage away from the middle linebacker. If it’s open, the quarterback will hit it right away.

When offenses get a Cover 3 look, they will generally read the side with less defenders and read curl-flat-sit. Here, the Cowboys have two defenders to the trips side, one linebacker right over the center, and a safety down at the line of scrimmage.

That indicates to the quarterback that he should be reading the two-receiver side. Since the Saints are in a tight split though, he has to confirm that the linebacker over the center doesn’t get depth under the curl. Once he confirms that, all he has to do is read off of the flat defenders movement. If they run out to the numbers to cover the flat, there’s an easy lane to throw the curl.

For the quarterback, the reads are:

Similar to the previous clip, the Giants attach to the sit route to the bottom of the screen (two-receiver side). That tells the quarterback to read that side of the field. The flat defender widens and the is curl open.

Now, the Steelers are running Hank off of a motion to the flats. If the receiver in motion out-leverages the flat defender or the man chasing, it’s an easy throw outside to get him on the edge of the defense.

The Hank concept is a popular play at every level of football. It exploits underneath defenders in Cover 3 and lets the quarterback anticipate the soft spots in zone for easy completions to stay on schedule.