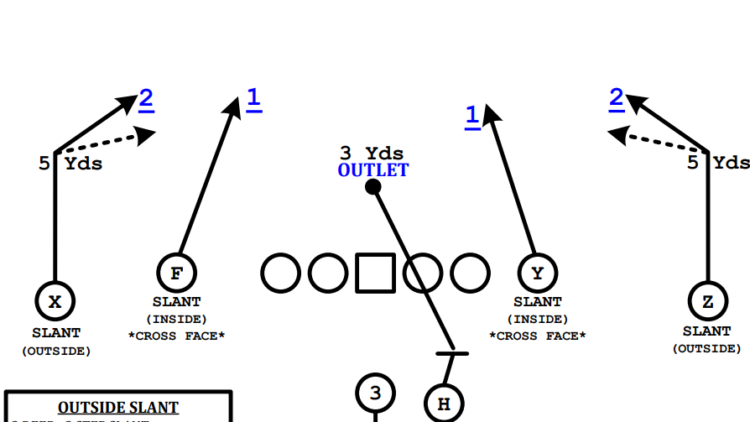 Lion is a quick game concept that works best against Cover 2 and Cover 2 Man. While the outside slant can win against man coverage, the concept works to stretch the slot defender over the #2 or #3 receiver.

The Lion concept attacks the linebackers and the outside leverage corners in two-high safety looks.

Lion consists of two routes from the same side of the field:

The two slant routes are usually paired with a checkdown over the ball by the running back. If linebackers attach to the slants and nobody gains leverage, there’s an outlet right in front of the quarterback to get the ball to.

Lion wants to attack the slot defender and leverage of the defense. If the inside slant immediately wins leverage to the middle of the field, then the ball goes to there at the top of the quarterback’s drop.

The Packers are running a cross route to pull the defender over #3 which creates a window for the slant in behind.

Now out of a two receiver formation, Cousins and the Vikings have the same read. The Saints are in Cover 4 and the flat defender flies outside and the linebacker drops to a Tampa 2 look which vacates the middle of the field for the first slant inside.

When the inside slant from #2 is covered, the quarterback will shift outside to the slant from the #1.

Lion is a day one install for the quick game and is best used against Cover 2 or middle-field-open coverages. It allows the offense to gain leverage on the outside slant and put the middle linebacker in conflict. As a two-man route, it’s easily paired with other quick game concepts or as part of an RPO to help give the offense answers for whatever coverage they see.