Cover 1 defenses rely heavily on the athletic ability and performance of their corners and linebackers in coverage. Since there is only one safety, there is minimal help over the top which can lead to big plays if corners or defenders get beat. However, it also creates smaller windows for the quarterback to throw into and allows the defense to bring blitzes while making sure to have someone for every eligible receiver. In many instances, corners and underneath defenders will press receivers to disrupt timing and allow the pass rush to get home.

With defenders having their backs turned in man coverage, interceptions don’t happen very often in Cover 1. However, it does provide the ability to disguise and the flexibility to match whatever personnel are on the field. 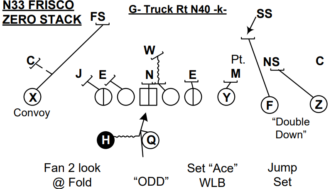 Also Read:
The Mesh Concept is a common Cover 1 beater

The most common variation is Cover 1 Robber. Robber starts out with two safeties at the snap of the ball and then rotates the strong safety down into the middle of the field to “rob” routes.

This disguise can get the offense into a disadvantageous call and force the quarterback to read the coverage and diagnose things post-snap. It allows for players with ball skills to come down unexpectedly and attack routes in the middle of the field or help to double star receivers in combination with the defender that’s in man coverage on them.

This is an example of the Chiefs running Cover 1 against the Bills in the 2020 AFC Championship game. The Chiefs are manned-up across the board with the field linebacker manned up on the running back and the boundary linebacker playing in the same robber role as described above, just from a different position. Kansas City is able to stay tight in coverage and force the incompletion.

The Lions are giving another Cover 1 look, except they’re dropping one of the guys at the line of scrimmage into coverage and only bringing three players on the rush. The one off-ball linebacker is spying Kyler Murray. The player that drops back from the line of scrimmage to the top of the screen is playing the low hole and is bracketing any routes over the middle. The safety is also running a Double-X version of Cover 1. That means that he is helping to bracket the single receiver Deandre Hopkins at the bottom of the screen by taking away any in-breaking routes like posts or digs.

Lastly, here is an example of the Bears running Cover 1 Robber. The field safety is coming down to rob the middle of the field and attack any crossing routes. Everyone else is in man coverage. The robber is able to help bracket the deep over route from the #2 receiver.

Cover 1 keeps things simple for the defense while still being able to help them disguise and attack the offense in multiple ways. It relies heavily on having corners that can hold up in man coverage, but it forces tighter throws and prevents blown coverages.