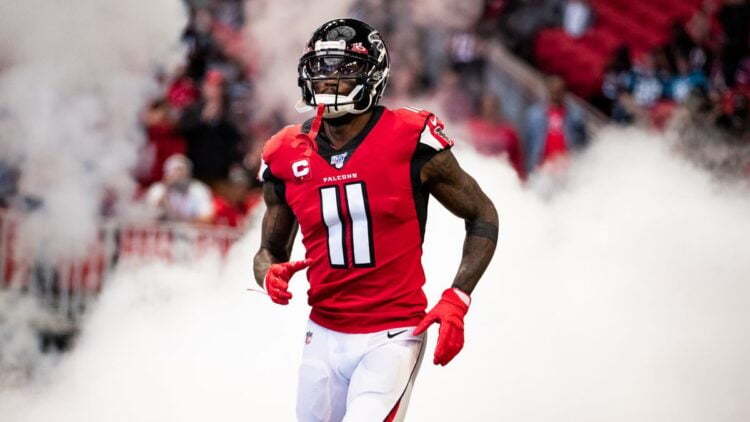 For the past three seasons, the Atlanta Falcons have been an enigma. In 2018, they lost five games in a row only to win their last three. 2019 saw a similar streak in which they started 1-8, only to win six of their last eight games. In 2020, the Falcons could never piece together a strong stretch and finished a dismal 4-12. They were atrocious defending the pass with the 32nd ranked passing defense, but dominated through the air on offense with the 5th best passing offense. They were stellar against the run with the leagues’ 6th ranked rushing defense, but could not run effectively themselves, which lead to the 27th ranked rushing offense. The 2021 season brings in new head coach Arthur Smith and a new general manager in Terry Fontenot. Hopefully these two can right the ship with a flawed, but talented roster.

Read More: Arthur Smith is a Falcon – What that means for the Atlanta offense

Rookies to the Rescue

The Flacons enter the 2021 draft with the 4th pick and three distinct possible strategies. The first is using the high pick on one of the elite quarterback prospects. Matt Ryan has had a stellar career and is often overlooked as a great quarterback when compared to the likes of Drew Brees or Tom Brady. Another option is looking to go all in on their explosive passing offense and selecting one of the outstanding wide receiver prospects. Lastly, in a less glamorous move, Atlanta may attempt to shore up its weak pass defense with a defensive back who can go toe-to-toe with the elite receiving weapons within the division.

Despite 4,581 passing yards and a very solid 83 player rating on the season, Matt Ryan failed to elevate the Falcons above four wins. After 13 seasons, Atlanta may finally decide it’s time to look elsewhere for passing production. With the fourth pick, Zach Wilson from BYU could look to usher in a new era in the Mercedes-Benz dome. His recent Pro-Day performance reinforced how dominate his arm talent is. It may be a stretch to get him at 4th overall, but if he’s there, the Falcons have to take him. Against UCF, he threw for 435 yards and three touchdowns. He was even better against Houston tossing four touchdowns and another 400 yards through the air. With only three interceptions on the year, Wilson has the ability to put the ball anywhere on the field and prevents turnovers by making smart reads in the pocket. Wilson also rushed for 10 touchdowns and 254 yards on 70 carries. However, there could be questions in regards to the competition he faced during his college career. Over three seasons, he is an unspectacular 4-2 against Top 25 ranked opponents. His stats and the eye test are difficult to ignore, but those who value level of competition may have reservations.

Julio Jones and Calvin Ridley form one of the best wide receiver duos in the league. While it may be viewed as a reach to some, the addition of Ja’Marr Chase could elevate a 5th ranked passing offense to the highest echelon in the league. In his last full season, Chase had three games of 200 plus receiving yards and scored 20 touchdowns. Unlike the previously mentioned Wilson, Chase dominated against elite competition all year. In fact, his final three college games came against #4 Georgia, #4 Oklahoma, and #3 Clemson in the championship game. Devonta Smith had a great year in 2020, but Chase had an equally dominant year against arguably a tougher schedule. Taking the 2020 season off may have caused Chase to be forgotten by many, but those looking for the next premier wideout will not forget the star out of LSU.

A quarterback or wide receiver would be an exciting addition to the roster. It would generate highlight plays and league wide discussions. However, Atlanta’s real weakness was its porous passing defense. Atlanta currently has five cornerbacks on its roster. Three of them are rookies which leaves the Falcons a very thin line of defense against the elite receivers that reside in the NFC South. There are a handful of great prospects at cornerback such as Caleb Farley and Jaycee Horn, but Surtain II gets the nod here.  While his interception and tackle numbers seem pedestrian, his 12 passes defended rank 3rd in the nation. He’s athletic and fits the physical prototype of a corner at 6’2″ and 202 pounds, while still playing with refined technical skills. He does not bite on double moves, is a solid tackler, and knows how to disrupt passes. A player like Surtain II would instantly give them a pro-ready player in the secondary.

The offense will remain effective with players like Mike Davis being signed and incumbent starters such as Julio Jones returning. Some help on defense should elevate a middle of the pack defensive unit.

From 2012 to 2015, Houston was one of the premier pass rushers in the NFL and made four consecutive Pro-Bowls while putting up an absurd 22 sacks in 2014. His last two seasons with the Colts have been productive with him producing 19 sacks over that time. The most surprising development has been his durability in his age 30 and 31 seasons. Having not played a full season from 2015-2018, Houston has started all 16 games over the last two years. His pass rushing skills would relieve pressure on the secondary and give Atlanta a player capable of putting up double digit sacks.

Another Colt that could find himself down in Atlanta is safety Malik Hooker. Unlike Houston, Hooker has not been overly effective during his four-year career. A torn Achilles tendon puts even more questions around his abilities to play in the secondary. Having never played a full season and totaling seven interceptions across four seasons isn’t ideal, but he was drafted 15th overall in 2017. The high round pedigree is there and just needs to be refined. At 25 years old, the Falcons can gamble on his ability to recover from injury and should be able to offer a relatively small contract.

Atlanta has not been the same team since their collapse in 2017. A solid offense has often been derailed by defensive letdowns and now the question is whether to push for one last run or begin a rebuild. $20 million in cap space and a top five pick ensure Atlanta will be able to add some quality pieces.