Diontae Johnson and his potential in the new Steelers offense

Diontae Johnson was a bit of an enigma for the Steelers offense. He had 144 targets and while he appeared to be a focal point, the Pittsburgh offense that didn’t do much to scheme him open. He’s a dynamic player with good route technique and some nice burst. However, he was largely left to his own devices to open himself up.

Diontae Johnson is good enough to win on the outside or at slot. He uses good patience and suddenness out of his breaks underneath. One of his favorite releases is to give foot fire to close distance on the defender. That allows the defender less time to react to his eventual cut.

Especially on quick routes, he played with great timing and patience. It’s easy to immediately get to your spot, but Diontae balances releases with the timing of plays. Against the Titans, Johnson uses a foot fire release on the corner walked up in man coverage. The Steelers are running a levels concept to the bottom of the screen and using Johnson on a dart route with a slot fade inside to clear the slot defender. Johnson knows he has to get to his spot quickly based on the look from the Titans defense with their linebackers walked up at the line of scrimmage. He still wants to get his defender on their heels, though. He slow plays with an extra jab step before pressing hard outside and getting the corner onto their heels. That’s all it takes in man coverage and Johnson wins inside off the snap. 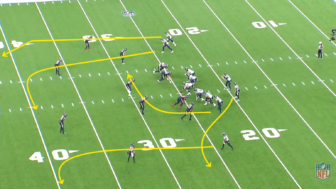 Whenever Johnson got that man coverage look, he’d use the foot fire to hold the defender and get them leaning back on their heels. It doesn’t look like all that much, but it’s incredibly effective and relies heavily on developing timing and rhythm with the quarterback.

With Johnson’s exceptional change of direction abilities, he’s also great in space. Whether that’s on more quick slants or through screens, it doesn’t matter. Get the man the ball and let him go.

What didn’t happen in the Steelers’ offense, though, is using Diontae Johnson consistently down the field and scheming him opportunities to get open with motion, play-action, or any other mechanism. Since 2016, the Steelers are dead last in the NFL with play-action usage with just 12.3%. While the Steelers are an anomaly over that span, the rest of the league is much more efficient passing with play-action than passing without. The Steelers were also a middling pre-snap motion team. Pre-snap motion has historically had a strong correlation to on-field success and offensive yardage. That all should change with new offensive coordinator Matt Canada. The shift in offensive philosophy will be huge for Diontae Johnson and his skillset.

Matt Canada has bounced around a lot, so it’s hard to get a feel for what his offense will eventually look like. He’s had one-year stops at LSU, Maryland, Pitt, Wisconsin, and Northern Illinois. All as an offensive coordinator and quarterbacks coach. During his stops, he’s tailored his offenses to match the personnel. He has emphasized zone read and spread as well as power football and 22 personnel.

One thing we do know is that the Steelers invested heavily in the run game by drafting Najee Harris, Pat Freiermuth, and two offensive linemen in Kendrick Green and Dan Moore. We also know that Canada loves to use pre-snap motion and play-action. Diontae Johnson would be the perfect jet sweep and Z receiver for Canada’s offense. He has the tools to operate with RPOs and quick hitters, the quickness to make moves in space, and the ability to break off big chunks in mismatches. If you scheme things open for him, he’s going to be a problem.

These three plays are all from the first series of Pitt’s game against Clemson when Matt Canada was there in 2016. You can see how drastically different things look compared to the 2020 iteration of the Steelers offense.

It starts with Pitt using 23 personnel with two backs and three tight ends in a run-heavy formation. Canada then shifts to an empty look with that same personnel – a rarity at any level. Clemson matches with their big bodies and guys that aren’t used to being in coverage. The defense gets lost in their responsibilities after the shifts and Pitt hits the fade down the sideline.

The amount of pre-snap movement and complexity is pretty impressive. Here, Canada is moving around linemen with a tackle eligible, switching guys around to mess up matchups, and then adding motions on top of it. That leaves Clemson completely lost on defense. The first shift gets a tight end into the left tackle spot and bumps on the right tackle to the slot receiver position. That alone starts the gears turning for Clemson’s defense. Then, as soon as they’re set, Pitt shifts again. Clemson is now overloaded to the right side of the formation. The defense has nobody in either the A or B gap to the left side. Canada throws a jet sweep fake in there for good measure and Pitt runs outside zone to the weak side to pick up a chunk gain.

Lastly, he gives more shifts, more movement, another jet motion fake and then uses power shovel to his tight end for a score. It’s beautiful stuff and he has schemed guys into looks just by moving around and causing confusion on the defense. 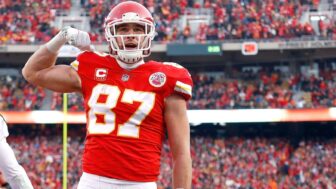 Also Read:
How the Chiefs use Kelce on the power shovel
Processing…
Success! You're on the list.
Whoops! There was an error and we couldn't process your subscription. Please reload the page and try again.

The Steelers have weapons on offense. It might take some time for them to get to the point of all this movement, but Canada is great at creating mismatches, blown coverages, and misalignments on the defense. For guys that can already get open and are dynamic in the open field like Diontae Johnson, this could be huge boost to their production levels. With pre-snap motion to help move him around and plays that build off of and work with each other, Johnson could turn the same target share and catch rate into an even more productive season both in yardage and in touchdowns. If I was a Steelers fan, I’d be excited. If the offensive line solidifies, Canada and Johnson could do some serious damage and remain atop the AFC North.