Mark Andrews is solidifying himself as an elite tight end 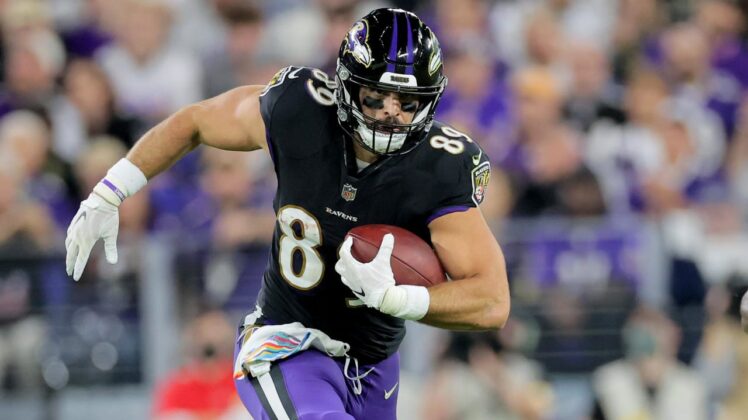 Mark Andrews won the Mackey award while he was at Oklahoma, but somehow slipped all the way into the 3rd round of the 2018 NFL draft. Since then, he’s amassed 3,000 yards and 28 touchdowns for the Baltimore Ravens while putting himself in the conversation of being one of the best tight ends in the league.

This season, Andrews has already piled up 1,062 yards, eight touchdowns, and has been targeted 122 times. He is doing everything for Baltimore. He’s their most consistent target, is a big part of their run blocking, and has managed to stay healthy through the year. What’s more, he’s done all this with a Ravens roster around him that doesn’t have many other threats. Of course, Lamar Jackson demands attention, but the running game isn’t quite what it has been in years past and Rashod Bateman and Hollywood Brown aren’t producing at high levels. That leaves Andrews as the main target for the Ravens.

Teams know that Andrews is the biggest receiving weapon and yet they still can’t stop him. This past weekend against the Green Bay Packers, he put up 136 yards and two touchdowns in the blink of an eye. The Packers tried all sorts of strategies to stop him. They tried using different guys in man coverage, bracketing him, jamming him at the line of scrimmage, and playing off coverage. It didn’t matter. Mark Andrews was one of the best players on the field.

With other top tier tight ends like George Kittle and Darren Waller battling injuries, Andrews has separated himself from the pack. Travis Kelce is the only other tight end in the same ballpark and their volume stats are strikingly similar. The main difference is that Andrews is producing without anyone to take away attention from him like Tyreek Hill does for Kelce.

There are only so many targets to go around in the Ravens offense, but Andrews makes his impact felt in the run game as much as he does the pass game. He plays with a good base and power and has turned a pre-draft weakness into a strength. The NFL continues to be a matchup league and when you have a tight end that can dominate guys in the run game and then run by guys in the pass game, it makes the offense incredibly difficult to defend. Mark Andrews has ascended into being that guy and is one of the NFL’s elite tight ends.