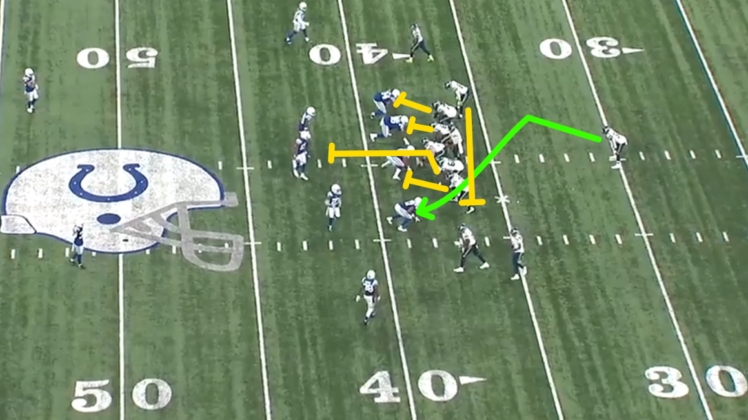 The Seahawks offense looked dramatically different in Week 1 than it did the rest of the year. For whatever reason, the Seahawks got away from some of the Sean McVay and Kyle Shanahan staples that Shane Waldron had brought over. The following play is a fantastic illustration of how the wide zone scheme, motion, and run action can create opportunities for explosive gains. 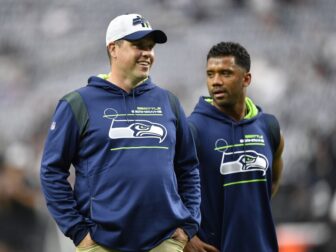 Seattle is running a designed cutback with a lead block off of wide zone. The offensive line is taking wide zone steps initially, but their intention is dramatically different. Instead of attempting to overtake and climb, they’re instead working to seal the defense to the top of the field. Additionally, Seattle is crunching their wing across the formation to give a split zone look. Split zone helps to seal the backside end on zone plays and creates space for a cutback. It also serves as a way of slowing down backside pursuit.

The Seahawks are making this play look exactly like wide zone with a crunch. They even have jet motion and the initial reverse pivot from the quarterback to sell the same action. Then, they’re punishing the Colts for reacting to and over-pursuing to the playside. Seattle uses their crunch block as a lead block outside and crack DK Metcalf down on the nickel linebacker.

This is a designed cutback all the way. Every piece of the play is used to get the running back on the edge of the field.

Seattle is using a condensed formation with all of their receivers in relatively tight. That in turn, brings defenders inside and opens up the perimeter. The Jet sweep moves the nickel linebacker inside and bumps defenders away from the direction of the intended run. As a result, that gives Metcalf, now alone to the bottom of the field, the angle for a crack block on that nickel corner. The Seahawks have worked really hard to create flow away from their intended run direction.

As mentioned, the offensive line is taking the initial steps of wide zone. However, they are keeping their heads to the inside of their defenders, which gives them leverage to seal them backside. The crunch from the wing bluffs the defensive end that is trying to chase down the line to stop the wide zone run. That forces the end to stop their feet, sells to the linebackers its regular split zone, and helps get the edge for the running back. That wing then continues on to block the corner.

The last piece of the puzzle is the ball handling by Russell Wilson. He reverse pivots out from the snap and turns his shoulders like he’s giving wide zone right. He then wheels around to give the ball on the other side to allow the running back a clean track to the perimeter.

The Seahawks made subtle tweaks to their base scheme to come up with a counter to an over-aggressive front seven from the Colts. They were able to gain blockers to the play side by using motion, formation, and play design and picked up an easy 10-yard gain on the ground.