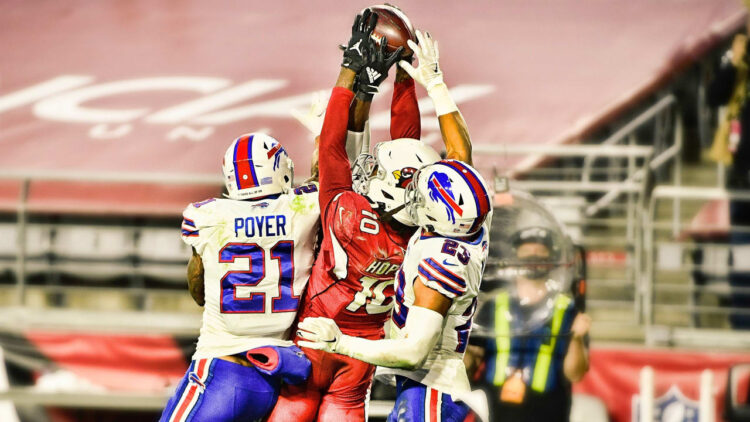 For most teams, producing an 8-8 record is viewed as football purgatory. It’s not quite good enough to make the playoffs, but not bad enough to earn a high draft pick. Yet, the Arizona Cardinals are not most 8-8 teams. They have a young, MVP caliber quarterback in Kyler Murray, recently signed defensive stalwart JJ Watt, and enter the 2021 season hoping to assert themselves in a stacked NFC West.

With the 12th overall defense and 13th overall offense, continued growth from Murray coupled with support from this year’s draft could see the Cardinals surprise the league and make a push for the playoffs.

Birds of a feather flock together?

Unlike their division rivals in the Rams or Seahawks; Arizona owns all of their upcoming draft picks and has $12,588,869 in cap space to strengthen their roster. However, they must be strategic in how they spend their resources. On one side, signing JJ Watt has boosted the defensive line alongside Chandler Jones.

However, starting running back Kenyan Drake and four of their cornerbacks will also be hitting free agency. That includes starters Patrick Peterson and Dre Kirkpatrick. If they do not make the right moves, they could run the risk of wasting another year of Kyler Murry’s rookie salary.

Find out more about the NFC West:

49ers Team Needs: Run it Back or Rebuild?

The Cardinals were able to field the 10th ranked passing defense despite major regression from All-Pro corner Patrick Peterson. Despite that, the secondary managed 11 interceptions and allowed a respectable 226 passing yards per game. However, with all four primary cornerbacks entering free agency, they need to invest in that position. With the arrival of Matthew Stafford, the NFC West now features elite offenses across the board. The Cardinals cannot allow these departures in the secondary to go unanswered.

Reinforcing the secondary will most likely be addressed by the 16th pick in the upcoming draft. Fortunately, Arizona will be primed to select South Carolina’s Jaycee Horn. The 6’1″, 205-pound cornerback brings SEC pedigree and a strong statistical profile. Over his three-year college career Horn played 29 of 30 games and in his final season managed to make second team All-SEC despite only playing seven games. While his durability and stats make Horn as a top prospect, it is his physical and aggressive style of play that set him apart. Horn loves to disrupt receivers both at the line of scrimmage and down field. However, scouts believe this aggression can also be a weakness at times. Being overly physical, especially in the NFL, often leads to holding and pass interference penalties. If Horn can refine his game, he is mong other elite prospects such as Patrick Surtain II and Caleb Farley.

If Arizona decides they want to go the route of an established defender, then 2018 All-Pro Desmond King II will be one to keep an eye on. After a midseason trade to Tennessee and only starting 8 games this year, King is 26 years old and has an All-Pro selection on his resume. While he did not have any interceptions on the year, King did have a respectable 65.5 player rating and only allowed 8.5 yards per completion. Arizona is looking to break into the elite of the NFC and have already set the precedent that veteran signings may be the plan for 2021. King would add more name recognition to a defense that is home to Budda Baker, JJ Watt and Chandler Jones.

Filling Out the Offense: Wide Receiver & Running Back

DeAndre Hopkins is a known commodity. His connection with Murray was evident instantly and lead to 1,407 receiving yards and six touchdowns. However, Christian Kirk was the second leading receiver with only 621 yards. No other receiver surpassed 450 yards on the season.

On the ground, leading rusher Kenyan Drake will also be a free agent. While he did rush for 955 yards and punch in 10 touchdowns, he only rushed for over 100 yards in two games during the season and saw Chase Edmonds eat into his touches. To keep pace with the other high-powered offenses in the division, the Cardinals will look to add more talent outside the numbers and in the backfield.

In terms of receiving help, 2020 breakout receiver Corey Davis could fill the role of a number two pass catching option. Davis had a career year in 2020 and posted 984 receiving yards, five touchdowns, and hauled in 70% of his targets; all career highs. With Hopkins drawing the most attention, Davis could enjoy matching up with lesser defensive backs and will have a top tier passer getting him the ball. Averaging 70 yards a game would give the Cardinals a reliable option to work the intermediate passing game while Hopkins dominates downfield. In a division where the Rams, 49ers and Seahawks all boast multiple 1,000 yard receiving threats, the Cardinals need to keep up in the passing arms race.

Kenyan Drake has been solid, but unspectacular during his year and a half in Arizona. Across five seasons he has yet to rush for 1,000 yards and failed to reach 200 hundred yards in the passing game. Instead of overpaying for the services of an average back, it may be wise to pursue a player who is younger and has produced similar rushing statistics. Marlon Mack was primed to take on a lesser role with the Colts due to the arrival of rookie Jonathan Taylor. Suffering a season ending Achilles tear will likely lower his perceived value, but in his last healthy season he managed 1,091 yards and eight touchdowns on the ground. Pairing him with Chase Edmonds will give Arizona both a strong rusher in Mack and effective receiver in Edmonds.

The Arizona Cardinals started this offseason by making a big move in signing JJ Watt. However, simply adding a big-name player does not make an 8-8 team a championship contender. They must follow that big move with efficient use of cap space and draft capital.

Kyler Murray is under contract through 2024. MVP caliber quarterbacks demand a hefty price tag once their rookie contract expires. Now is the time to fight for a championship before money and age take their toll.