Malik Willis turned heads in 2020. A transfer from Auburn to Liberty, he’s a top tier dual threat guy with 20 touchdowns and 2,200 yards through the air combined with 944 yards and 14 touchdowns on the ground. Willis is magician in the pocket and has some of the cleanest mechanics when creating and throwing on the move. He routinely extends plays and hits receivers downfield or takes off on his own for chunk gains. However, that didn’t always translate when he stayed in the pocket and went through progressions. Liberty asked for a lot of deep shots, but he had poor deep ball mechanics and was hesitant on reads. The biggest thing for Willis is consistency. Every 5th or 6th play he makes a fantastic throw or evades pressure, but he will also miss routine throws when in the pocket.

Malik Willis is a fantastic athlete. Sometimes that has a bad connotation when attached to quarterbacks, but it’s a huge part of Willis’ game. He has fantastic escapability and is a legitimate threat on the ground when he takes off. Liberty uses him on designed runs and read options, but he absolutely shreds defenses on scramble drills. He’s only 6’1” and 215 pounds, but he’s incredibly tough to bring down in the pocket and is agile enough to make people miss and break tackles.

You don’t get 900 yards rushing as a quarterback by accident. Malik has the tools to be a legitimate threat on the ground in the NFL. You probably won’t see him run as much at the next level, but it can be a big part of his playbook. Especially with schemed looks and designed touches, he is a problem for defenses to have to cover.

At the college level, he was inconsistent in keeping his eyes up. He wasn’t a pure run first guy when scrambling, but if he saw a big hole, he was going to take it. That may result in him picking up chunk gains, but when evaluating his ability at the next level, you also want to see him throw on rhythm or hit receivers instead of running. Here, NC State is in Cover 1 and sending a corner blitz to the bottom of the screen. It’s also worth noting that Liberty’s offensive line was absolutely atrocious all year.

Liberty is running the Drive concept to combat the Cover 1 look at the top of the screen. Willis’ tackle gets beat around the edge and Willis has to climb the pocket. However, if he wanted to, he could have quickly taken the flat to the top of the screen in rhythm. As he climbs, he also could have hit the dig coming across right in front of him with space to run. That dig would have been a nice chunk gain, but Willis is already committed to running the ball. At the end of the day, though, he takes off for about 20 yards so it’s hard to get too into him for not taking that dig.

Mechanics outside of the pocket

There are definitely things to critique Willis on and one of those is his over-eagerness to get outside of clean pockets. As mentioned, despite his penchant for making things happen on broken plays, he didn’t always just tuck the ball and run. He didn’t need to bail from the pocket here, but this is a fantastic ball on a dead sprint. Willis is at home on broken plays and he’s able to create with his legs and his arm while the defense scrambles to react.

What’s more, he’s incredibly sound when throwing on the move – something that a lot of quarterbacks struggle with. When throwing on the run, you want to create lower and upper body disassociation just like you do when you’re throwing from the pocket. It’s just harder to do typically because you have momentum carrying you in different directions. What disassociation means in this case it that you want to have your lower body and upper body facing different directions. To be more specific, your hips and the point of your off shoulder need to be perpendicular. That creates tension in your core and the release of that tension, is what creates power and accuracy for your throw. 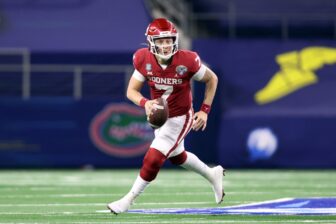 Malik Willis creates that disassociation at a really high rate when on the move. You can see here how his front shoulder is closed to his throw with his upper body pointed towards the sideline and his hips perpendicular and pointed downfield. That allows him to get power while on the move and deliver a strike for the touchdown back across his body.

Over and over again, Malik did a fantastic job of creating that tension and then using his natural arm talent and accuracy on the move whether he was rolling to his left or his right. He is such a weapon in the open field that it really puts defenses into impossible situations. He’s accurate enough on the move to make any throw and he’s a problem on the ground if he decides to take off. That leaves defenses exposed and in bad spots.

He has a rocket arm and no issues with arm strength. He can throw outside the numbers, push the ball deep, and drive balls in the middle of the field.

The talent and physical tools are there and they’re there in bunches. It’s easy to look at what Malik does outside of the pocket and become enamored, but his mechanics and reads inside the pocket leave a lot to be desired and to be a first round pick after this season, that stuff has to be cleaned up bigtime.

This is an example of Malik Willis doing some crazy stuff in the pocket, but having trouble with his pre-snap reads. Liberty has a Dragon/Lion variation called here with Lion (double slants) up to the top of the screen and Dragon with a glance route and wheel at the bottom.

Generally, when faced with two safeties, you want to read Lion and work off of the hook defender. If he attaches to the inside slant, you throw outside, if he drops, you throw the inside slant. The problem is, Malik doesn’t look to that side. Instead, he’s reading the adaptation of Dragon which is not a great call against the coverage. As mentioned before, Liberty’s offensive line was pretty bad and when the ball doesn’t come out in time, Willis has to create on his own. He does a great job creating, but you’d like this to be an easier play where your quarterback doesn’t have to be a magician.

Here, Liberty is running the Mills concept with a deep dig from #3, a post from #2, and a shallow drag from the running back. What that’s doing is trying to isolate the linebacker and the safety in a high-low read. If the safety comes down on the dig, you throw the post over it. If the safety stays on the post, you read the linebacker to decide between the dig and shallow. Here, Malik is late on the throw with an extra hitch, he’s inaccurate, and he leads his receiver into a big collision.

The decision itself isn’t terrible – there is a window there — but you have to leave the ball skinny to prevent the receiver from running into the safety and drop it over the defender carrying the post. It’s not an easy throw and given his clean pocket, it’s not the one he should have made. Underneath, he has the dig in either the first window before the linebacker or in the second window as he clears.

Let’s rewind to his mechanics on the post throw, because that’s a recurring issue as well. When he’s trying to put some heat on his ball and push it deep, he has a tendency to have this odd follow through with this back foot. As he brings his hips through, he bends his knee and raises it almost to hip height. That creates a lot of imbalance, power generation issues, and inaccuracy when he throws deep.

When you don’t have a consistent and replicable way to finish your throw, you’re going to have accuracy problems because it’s hard to recreate and give your body feedback. If you have the same base every time and miss left or right, you can correct one thing and fix it. When your base or follow through is different every time, how can you pinpoint what to correct? Malik’s bent knee follow through was a problem all through 2020 and needs to be a point of emphasis for 2021. You can look at this frame and tell me if you’ve ever seen anyone finish a throw like that while in a clean pocket. I’ll bet you haven’t and it’s the reason why he will often miss long or short on his deep balls. His follow through and power generation are incredibly inconsistent when he’s throwing from a clean pocket.

When that knee bend is smaller, though, Malik Willis can sling it and shows some really nice accuracy and ball placement. It’s just wildly inconsistent.

It’s frustrating because Willis does have the talent and can read things quickly on some plays. He can throw in rhythm, understands leverage, and has really good timing on back-shoulders and quick game concepts. If all that comes together in 2021 on a more consistent basis, he’s going to be a ton of fun to watch and is going to skyrocket up draft boards.

Malik Willis is a special athlete and can be a special thrower. Right now, he isn’t what he needs to be from the pocket. Outside of the pocket, he can do some significant damage. To be able to play at a high level in the NFL, he has to develop better and more consistent timing and rhythm, quicker decisions on his reads, and better deep ball mechanics. If those get polished up, look out, because Malik Willis is going to be impossible to stop.