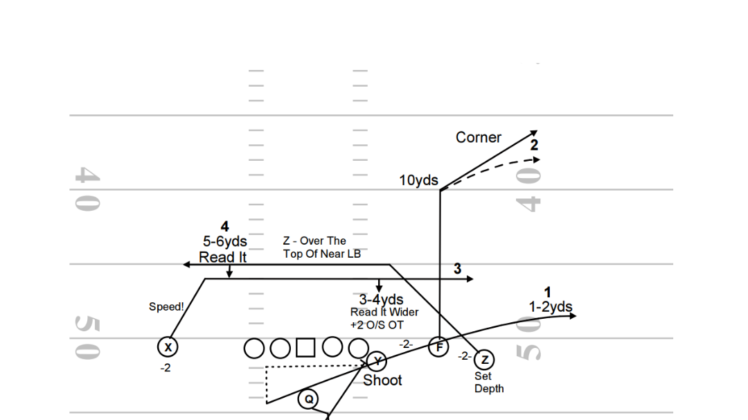 The Air Raid offense was popularized by Mike Leach, Hal Mumme, and Sonny Dykes. The offense is popular in college and is often accompanied by the no huddle and a fast tempo. Quarterbacks will audible at the line of scrimmage based on the defensive alignment. Air Raid is pass-heavy with the goal to get the ball to athletes in space. As a substitute for the run game, Air Raid offenses make a conscious effort to create high percentage passes and screens to stress the entire field and allow for easy execution.

Air Raid operates almost exclusively out of the shotgun and has a lot of spread concepts with four-receiver sets. It is incredibly pass heavy. A flagship signal of the Air Raid are increased offensive line splits. A line split is how far apart each lineman is from each other. Air Raid systems widen those splits to increase the distance that defensive linemen have to run to get to the passer. This also widens passing lanes for the quarterback and reduces batted balls. There are a lot of horizontal and vertical stretch schemes within the system. The offense also emphasizes simplicity. They run plays at a fast tempo, so the passing schemes are generally relatively straight forward. Some of the most popular pass plays in the system are: Mesh, Shallow Cross, Y-Cross, Verticals, and Stick.

Here is an example of Ohio State running the Mesh concept. The Mesh concept is a classic man-beater that creates rubs as players run across the field. If run correctly, the scheme makes defenders bubble over opposing routes which creates separation for players to catch the ball on the move. The #2 receiver at the top of the screen is the target of the Mesh concept. He goes underneath the tight end at the bottom of the screen which forces his defender to run into their own man. That creates an easy throw and catch for the Ohio State offense with lots of room to run.

In most offenses, the distance between linemen is roughly a foot. In the Air Raid, those splits can get up to two or three yards. While that isolates offensive linemen in more true one-on-one scenarios, it also has some added benefits. The wider the split, the further the distance from the defensive player to the quarterback. Thus, the more time to get the ball out of their hands. Any stunts that the defensive line uses also take longer to develop. Additionally, linebackers have to spread out to protect the wider gaps which opens up more lanes in the pass gams and gives the run game an opportunity to get an alley with the linebacker coming at a bad angle.

The Air Raid offense has been a staple in college football for decades. Its simplicity and tempo allow the offense to keep the defense on its heels. Many of the Air Raid pass concepts have made their way into all levlels of football and the offense has innovated different approaches to attacking defenses.