Power is a gap scheme run that creates movement with double teams at the point of attack while wrapping a lineman to the play-side to create a numbers advantage.

The power scheme uses the backside guard to pull and either kick out the end man on the line of scrimmage or wrap through and onto the second level. There are many variations of power that can change with different personnel groupings, formations, and defensive alignments.

Ultimately, power creates movement and a double team on the play-side, has some form of kick out block, and gets a lead blocker through the resulting play-side hole. The goal is to create a specific running lane with lead blockers that are working to the second level of the defense. 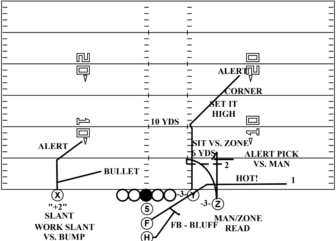 Many teams run power out of heavy personnel with H-backs, sniffers, or tight ends to give themselves more favorable alignments and allow for double teams.

The Rams are running a one-back power with a kick out and an H to the play-side. Since it’s a kickout, that means the play-side EMLOS is going to be left unblocked for the BSG to kick out. That allows for the H to move directly up to the second level with no player in his backside gap to take care of.

That also means that the PST and PSG are both freed up to double team their defensive tackle to the backside linebacker. By formation, the Rams have gotten a man advantage. They’ve got six guys blocking the six guys in the box from the Seahawks and they’re bringing an additional blocker from the backside.

The center down blocks on his backside gap and the BST pinches down and hinges. That movement from the BST helps seal the area in the centers backside gap while also preventing pursuit from the EMLOS on the backside.

The guard stays tight to the LOS and gets a good kickout block. The double team gets great movement on their guy and are able to work up to the BSLB.

With the Chiefs lacking numbers to the play-side, that leaves nobody to kick out for the BSG that’s pulling. When that happens, the BSG will continue on his path until he works off of the butt of the down blocks outside while hunting for the first enemy color to appear. The only defender that comes down is a DB-type and it’s a walk-in touchdown for Tampa Bay.

Lastly, is an example of the Browns bringing in a tight end in a nasty split and blocking the play-side end. That means the TE is going to seal the EMLOS to the play-side and that the BSG will now wrap through the gap created by the PST and PSG on the double team. That double team is working to the BSLB now since they know that the BSG is going to be wrapping through to pick up the PSLB. The center again down blocks to protect their backside gap and the BST pinches and hinges to prevent pursuit. Chubb rides his pulling guard and follows him up-field for a nice gain.

Also Read:
Mills Concept
Processing…
Success! You're on the list.
Whoops! There was an error and we couldn't process your subscription. Please reload the page and try again.

There are a lot of different ways to run power and offenses can force advantageous alignments from the defense via formations and personnel. Power brings physicality and runs the ball down the center of the defense. Additional blockers come to the play-side with physical down blocks and double teams to create movement at the point of attack.