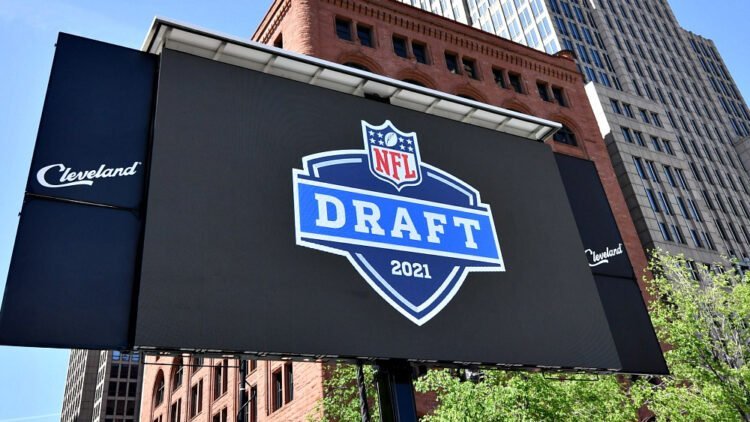 In this 2021 NFL mock draft we take a look at potential selections in the first round.

Quarterback was by far the biggest need for the Jaguars entering the draft. There is no doubt that Lawrence will be off the board here as he is seen as a generational talent that could transform the franchise. Lawrence will have weapons such as D.J. Chark, Marvin Jones Jr., and Laviska Shenault Jr. once he touches down in Florida.

When the Jets traded Sam Darnold to the Panthers, it solidified that Zach Wilson would be the next quarterback off the board. The new coaching staff believes Wilson has the talent to lead the new era in New York.

Mac Jones has been linked to the 49ers, but I believe Fields is a better fit in the offense. He makes the 49ers instantly makes them more dynamic with his mobility and athleticism.

Read More: Justin Fields film breakdown: the most accurate quarterback in the draft

Matt Ryan still has a few years of quality play in the tank, but it is hard for the Falcons to pass up on his potential replacement. The talent on the team is too good to not be competitive next season. Even with Trey Lance sitting for a few years, passing on him is too big of a risk when they may not have a chance to pick this high again.

Read More: Arthur Smith is a Falcon – What that means for the Atlanta offense

I believe this is a no brainer pick for the Bengals. They need to protect Joe Burrow. The receivers on the roster have enough talent to make things work and allow the Bengals to go after Sewell instead of of Ja’Marr Chase.

Chase comes off the board one pick later to give Tua Tagovailoa an elite game changer. He would be paired with DeVante Parker and Mike Gesicki that makes this offense one of the scariest in their division.

The Giants are jumping from pick 11 to pick seven to secure the next best offensive lineman ahead of the Panthers. Offensive line has been a severe need for this team for years and they can’t risk losing out on a top talent.

After trading for Sam Darnold, the Panthers focus on adding talent to Joe Brady’s offense. There are arguments that they have a bigger need at offensive tackle or corner, but there are opportunities later in the draft to secure those positions. Kyle Pitts has the potential to be the next Megatron and the Panthers need a playmaker to pair with Christian McCaffrey and DJ Moore.

The Broncos cornerbacks were nothing to write home about in 2020. They added depth in free agency, but choose Patrick Surtain to be the young leader of their defensive backfield. He is the safest pick at corner and has the potential to be an All-Pro player.

The Cowboys lost Chidobe Awuzie in free agency which leaves a major hole in the secondary. Horn is the next best corner in the draft.

If the Lions are in the market for a pass catcher, they’ll have no problem trading back with the Giants. They gain a third round pick and still have the ability to get their guy. Neither the Cowboys or Broncos have a need at receiver. I believe the Lions stick with Jared Goff for a year and focus on surrounding him with dynamic playmakers. They trade back and still have a chance to select the Heisman winner as their Kenny Golladay replacement. DeVonta Smith is the catalyst in rebuilding this offense.

Sewell and Slater are both gone which takes away the Chargers’ top two picks at tackle. They make the decision to move up a spot for Alijah Vera-Tucker to ensure they have a quality prospect and prevent the Vikings from moving into the spot. The Chargers need help on the offensive line and Tom Telesco has already expressed arm length is not an issue for him.

The Eagles gain an additional fourth round pick and have minimal no risk with plans to draft Jaylen Waddle. They bolster the receiving corps for Jalen Hurts with an electric playmaker that can score every time he touches the ball.

The Vikings use their first pick to rebuild their defensive line. Kwity Paye has the size and athleticism that separates him from the rest of his class at 6’4″, 270 pounds. He only tallied 11.5 sacks in his college career, but generated enough quarterback pressures to show his promise.

The Patriots biggest need is quarterback even after signing Cam Newton to a one year deal. Jarrett Stidham is on the roster as well, but he’s fighting an upward battle. Bill Belichick selects Mac Jones hoping to find Tom Brady’s successor. Jones is viewed as the most pro-ready quarterback and may have an opportunity to show his skillset in 2021 if Newton falters.

The Cardinals made a splash in free agency by signing J.J. Watt. In turn, they lost Patrick Peterson. Greg Newsome is a risk because of injuries, but his talent gives him the potential to be an elite cover corner.

The Raiders have not had an effective pass rusher since the departure of Khalil Mack. After Gregory Rousseau opted out, Phillips had a seamless transition into the lead edge rusher role. In 2020, Phillips had 15 tackles for loss, eight sacks, and dominated his competition. He has the versatility to play in both a 4-3 and a 3-4 defense as well. Jaelan Phillips could easily be the top pass rusher in this draft if not for his injury history.

The Dolphins add to their offense for the second time in the first round. Najee Harris is an all-around back that can run between the tackles and is a mismatch for linebackers in the passing game.

The Washington football team can become the scariest defense in the league by drafting Owusu-Koramoah. They receive a player who can play all three downs with speed to guard running backs and receivers.

Christian Darrisaw is the most sensible pick for the Bears after disappointing play from the tackles in 2020. Charles Leno Jr. was inconsistent and they released Bobby Massie. Although they added depth in free agency with Germain Ifedi, they do not have any tackles signed through the 2022.

Anthony Castonzo has retired and left a whole to fill at left tackle. Eichenberg has not allowed a sack in two seasons and is a prototypical NFL starter.

Read More: Carson Wentz to the Indianapolis Colts: Can He Succeed?

The Steelers look to jump the Jets who are in the market for a dynamic running back after drafting Zach Wilson. Pittsburgh is looking for a James Conner replacement and to add some punch to the Steeler offense. Travis Etienne, is a multi-faceted back who can catch and make the first defender miss.

The Jets look to fill the hole at edge rusher with Gregory Rousseau. Rousseau was a monster in 2019 and ended the season second in sacks behind Chase Young. He looked to build on his performance in 2020 before opting out because of Covid-19. At 6’7″ he is a physical specimen that has potential to wreak havoc against opposing quarterbacks.

This has some risk for the Titans because the Jets are in the market for a receiver as well. What makes the trade work for them is how deep the receiver position is in this draft. With the departure of Corey Davis, they can comfortably find a new complement to A.J. Brown even if Rondale Moore comes off the board. He is an electrifying receiver that can be used in a variety of ways and provides a new wrinkle to the offense with his versatility.

The Jaguars take a chance on the interior defender. Christian Barmore has tremendous size that allows him to play in a 3-4 or 4-3 defense and gives the Jaguars versatility on the defensive front. He excels as a run defender and has potential to grow into an effective interior pass rusher as well. Barmore will have to silence the rumors of him rejecting coaching and show that he is willing to do what it takes to be a professional.

The Browns look to upgrade their defense with their first round selection. They have talent in the secondary with Grant Delpit and Greedy Williams returning from injury. They now look to lock up the rest of the back seven by upgrading at linebacker. Parsons impressed at his pro day and gives the Browns a linebacker who has the strength to be effective in the run game and the speed to make an impact in coverage.

The Ravens look to add their WR1. Lamar Jackson has stated that he likes the current receivers on the roster. The problem is, none of them are consistent outside of tight end Mark Andrews. Rashod Bateman is a fluid route runner with strong hands in traffic. With Hollywood Brown as their deep threat, Bateman can play on the outside and the slot to help the Ravens balance out their one-dimensional offense.

After losing Janoris Jenkins in free agency, corner is the biggest need for the Saints. Caleb Farley has talent that pops out on tape and would be the best corner in the draft without his injury history. This would give the Saints two corners that can cover each teams’ best receiver.

The Packers have a need for receiver and most pf the public would like to see them take one in the first round. However, this is a need they can satisfy in the second round without reaching. David Bakhtiari tore his ACL in December which means he may not be available for week 1 and selecting Jenkins will help keep their future Hall of Fame quarterback clean. Jenkins provides the Packers with depth and versatility as he can play left and right tackle. He is athletic for his size and is exceptional in sealing defenders to create running lanes.

The Bills are a well rounded team with no major holes, but they could improve in multiple areas. One of the positions that can be upgraded is center. Creed Humphrey is a versatile player who does not have to start immediately. With no glaring holes, the Bills choose to protect Josh Allen with their first pick.

The Ravens traded Orlando Brown to receive the Chiefs first round pick and a myriad of late round picks. After taking a receiver for Lamar, they add Zaven Collins at linebacker. Collins is big at 6’5″ and has exceptional speed to play the run and pass. He is a compliment to Patrick Queen who plays better in coverage, but may lack strength at the point of attack.

The Super Bowl champions are the most complete team heading into 2021. They have very minor holes after bringing back most of their championship team. Defensive tackle makes sense here since Ndamukong Suh is only on a one year deal. This also makes sense because Vita Vea’s contract will end in 2022. Williams is a stout run defender that can stand up blockers to play two gaps in the run game.

The draft is only a day away and many teams will be picking based off positional need rather than the best available prospect. It will be interesting to see how many of the quarterbacks are selected on day one as well as what teams they fall to. There will also be a tug-of-war for lineman in the first round as teams will trade up to secure their top pick. The draft is unpredictable and we are bound to see draft day steals and head scratchers.